Set cookie preferences
Home > Blog > Focus on the Paralympics… Thanks for the warm up!

Focus on the Paralympics… Thanks for the warm up!

My colleague Cathy Williams is making another of her guest posts about records relating to London 2012.

Cathy writes: I’m hoping that Channel 4 won’t mind my borrowing one of their Paralympic slogans as they build on the enthusiasm of the UK public for the Olympics and stir up as much passion and support for ParalympicsGB athletes as for our TeamGB competitors already at home, polishing their medals or wondering where it all went wrong!

By most accounts it all went very well and, having been lucky enough to enjoy events at several different venues, I would certainly agree: there were no hold ups at security and even arriving at and leaving the Olympic Stadium with 80,000 other spectators didn’t mean horrendous delays. Ok, so after the rehearsal for the Opening Ceremony we were funnelled uncomfortably down one of Westfield’s shopping streets for over an hour … but when the Games actually began, that didn’t seem to be a problem.

So I have loads of personal memories in my head and on my camera, loads of memorabilia and mementos including tickets and flags and sundry other branded items which I need to sort through and organise and store, if I want to keep them.  But multiply those memories by the millions of global spectators and you’ve an unimaginable mountain of stuff all somehow contributing to the history of London 2012.

And that’s before you consider the official histories of agencies involved in preparing and delivering both the Olympic and Paralympic Games, and the Cultural Olympiad.

Basically, we’re looking at millions and millions of records of all types – but where are they all going? That’s exactly why we began The Record over four-and-a-half years ago … and why we continue to work to ensure that those records are not lost.

We need to find records creators and build relationships with records collectors so that as much as possible is retained in the short term while we assess its long-term value and make decisions on what to keep, why, and how – a bit like me and my stuff. Then we’ll be left with the best possible coverage of all aspects of London 2012: the good, the bad and the obvious for future researchers of all kinds, for all purposes.

One of the questions I posed in my first blogpost back in May was:

… and in answering that question I’m hoping you found the Mandeville Legacy website on the History tab of our The Olympic Record website.

You might have thought that the story of the Olympics was complicated, but for the Paralympics you don’t have to dig too deeply to realise that its easily as complicated – if not more so … and the project led by the Centre for Buckinghamshire Studies (CBS) and funded by the Legacy Trust has helped to expose and share that story.

But it isn’t just about the past; the four main objectives for the project looked to the future too:

So with the Paralympics about to begin, have a browse – it’ll inspire you to wave those flags all over again for ParalympicsGB!

But I’ve rambled on enough, so to finish – and since I half-promised in my first post to provide the answers to the quiz which took you on that tour of The Olympic Record – I shall leave you with a few sobering words from Rudyard Kipling, in the text of the Olympic Hymn used at the London Games of 1948, and the answer to just one of my questions: 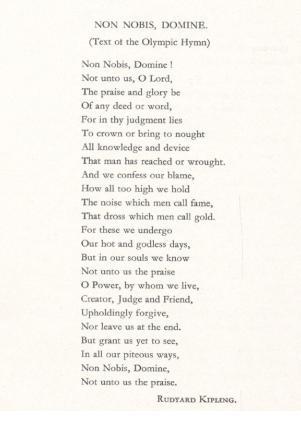 From: The Report of the Chairman of the Organising Committee for the XIV OLYMPIAD, London 1948 to the International Olympic Committee (June 1947) - Catalogue Reference: CAB 21/2255