Have you ever seen a trench map from the First World War written in four languages? No? We hadn’t either, until we started digging deep into our records about India’s involvement in the conflict, as part of our First World War 100 programme. This fascinating map shows the area around Loos, in northern France, and it is annotated in French, Punjabi, Hindi and Urdu (WO 297/3265). 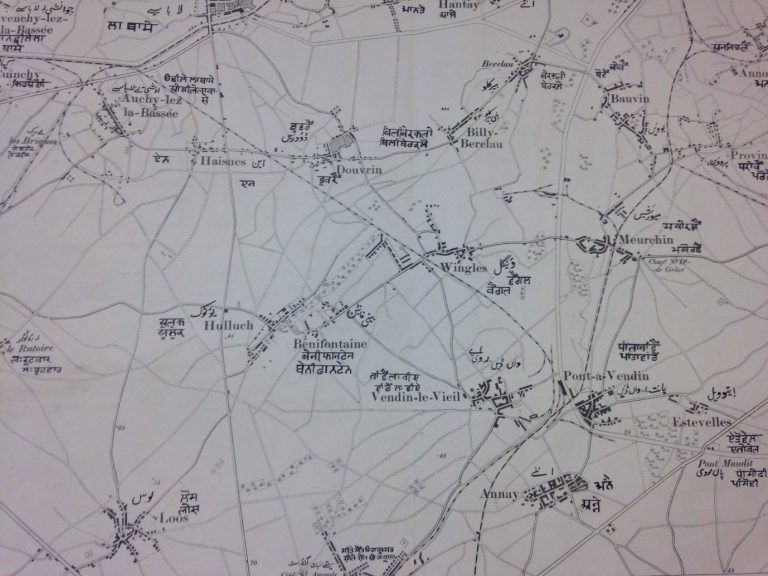 This map produces lots of questions: who was it made for? Where did they come from? Who were they working with? Who translated it? We wanted to find out more about the men who would have used this map, their communities and their experiences of the First World War (to read about the modern day countries within India’s 1914 borders visit our map).

To start this process, we decided to hold a workshop with key members from South Asian communities in the UK. One of the main aims of our project on the role of India in the First World War is to encourage people from these communities, who might never have thought of using The National Archives, to come and explore the records that we hold that tell their histories. We wanted to involve community members right from the outset, to ask for their perspectives on the records, and to gather their thoughts and feedback on what they might like to see from the project.

The workshop began with introductions, which highlighted the range of different backgrounds, professions and perspectives in the room. Some had fathers or grandfathers who had fought in the Indian army in the First World War, while others had put on plays and published books about the conflict. Also attending was a poet, a doctor and a local councillor, alongside representatives from various faith groups and community associations.

Everyone seemed to agree on one thing: that the important role India played in the war, and the sacrifices that its people had made, were not widely known about or recognised. There was a strong feeling that education about the contribution of India in the First World War was deeply lacking, meaning that this knowledge was often missing within the communities themselves, and within wider UK society.

Here at The National Archives, we have over 50,000 records of the unit war diaries of Indian regiments in the series WO 95. We also have the medal cards of the men who fought in these regiments, their operational records and Indian service records. For the workshop, our records specialists Vicky Iglikowski and William Spencer hand-picked some of the most compelling records from our collection, including the trench map in four languages which sparked lots of discussion.

Exploring our records was a key part of the workshop. Image courtesy of Alexa Phillips.

They also picked a unit war diary, which was scorched black in one corner as a result of an explosion described in one of the diary entries. This physical reminder of the events narrated in the diary captured the imagination of many people at the workshop. Dominic Rai, a writer and director, created a video in response to the diary. 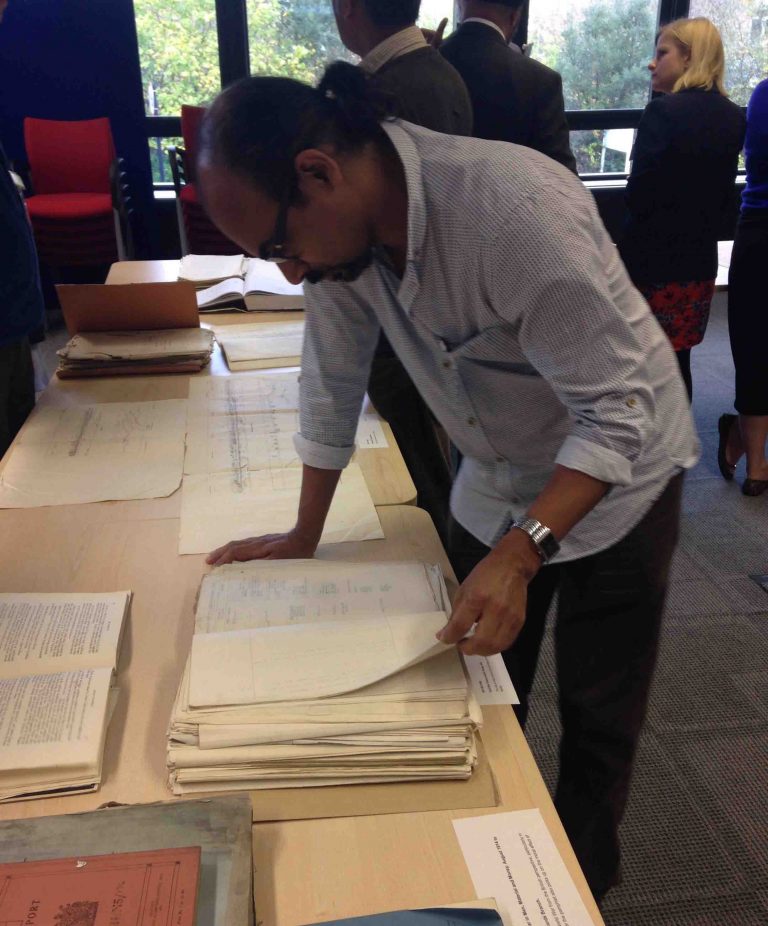 Examining records in the workshop. Image courtesy of Alexa Phillips.

Understandably, everyone had lots of questions about the records for Vicky and William, and you could feel the excitement in the room as everyone examined photographs, maps, war diaries, munitions reports, hospital registers and more. 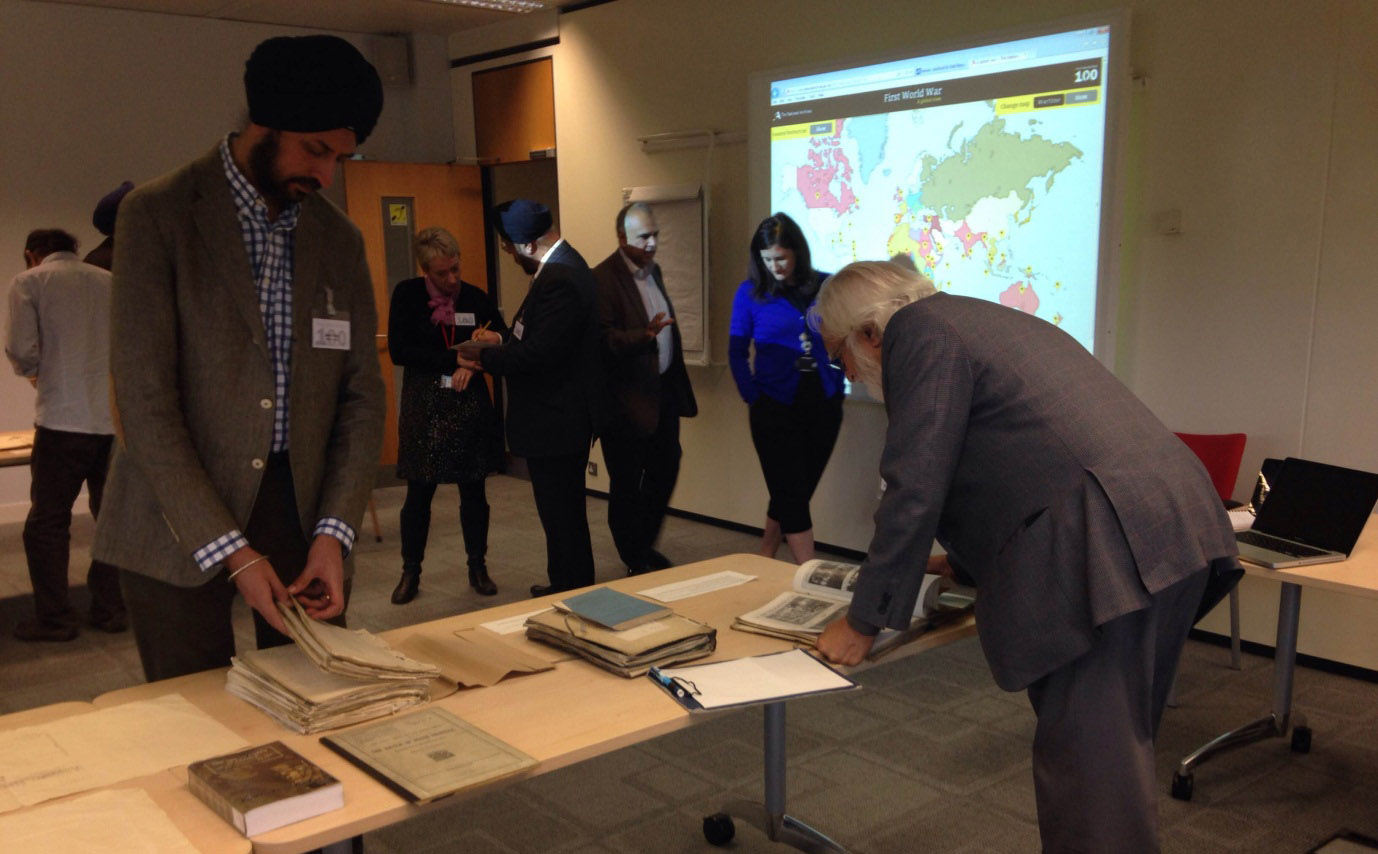 Examining records in the workshop. Image courtesy of Alexa Phillips.

Eventually, we tore ourselves away from the records and had a wide-ranging discussion in which everyone shared their thoughts and responses. We heard lots of suggestions about what we could do to reach out to communities, and we’re taking this feedback on board.

I think we all came away from the day with a deeper understanding of these records and the stories behind them. It was fascinating to hear lots of different perspectives on these records, and we were delighted with the amount of enthusiasm and interest that the records generated.

We will keep you updated on the next steps of this project in the New Year. In the meantime, if you would like to share your thoughts and ideas on this project then please join our First World War South Asia community consultation online forum, or comment in the comments section below.