Files from 1985/86: football, fire and hooliganism

The mid-1980s are often characterised as a period of success, excess and the shoulder-padded dress. In the political sphere this is exemplified by the image of Margaret Thatcher’s Government serenely overcoming a variety of challenges, while also developing a booming economy. The release of files from 1985 and 1986 today at The National Archives show that perception to be a little over-stated. Concerns over a lack of control of public expenditure and interest rates, stubbornly high unemployment rates, and the possibility of a miners’ strike in the winter of 1986/87 demonstrated a government striving to overcome a raft of difficult problems.

Amongst those problems were the connected but distinct issues of football hooliganism and fan safety in stadiums. Shocking events were often played out on prime time television which led some to see the issue of hooliganism as a visual representation of a country suffering from ‘social instability’. 1 Fans of Millwall and Luton Town rampaged in mid-March 1985 and – at the European Cup final in Brussels in May between Liverpool and Juventus of Italy – fans ran amok and the collapse of a wall lead to 39 deaths. The issue of stadium infrastructure came to national attention with the horrific fire at Bradford City’s Valley Parade on May 11 1985 in which 56 supporters died.

This grim picture constituted a substantial problem for the Thatcher Government to tackle and the files released today reveal the extent of the involvement of members of the Cabinet in the search for solutions. The Prime Minister herself was seemingly personally invested in challenging hooliganism, calling regular meetings with Cabinet ministers and senior figures from football.

Regular meetings throughout the period with the leaders of both the Football Association (FA) and Football League (FL), such as Bert Millichip and Graham Kelly, are characterised within government circles by an overwhelming sense that the football authorities were either unwilling or unable to properly solve the problem of hooliganism. The Press Secretary Bernard Ingham expressed his concern in a forthright manner: ‘the FA and the FL should be roasted; should be told in no uncertain terms that it is their game and they must act to make it wholesome’ (PREM 19/1527). 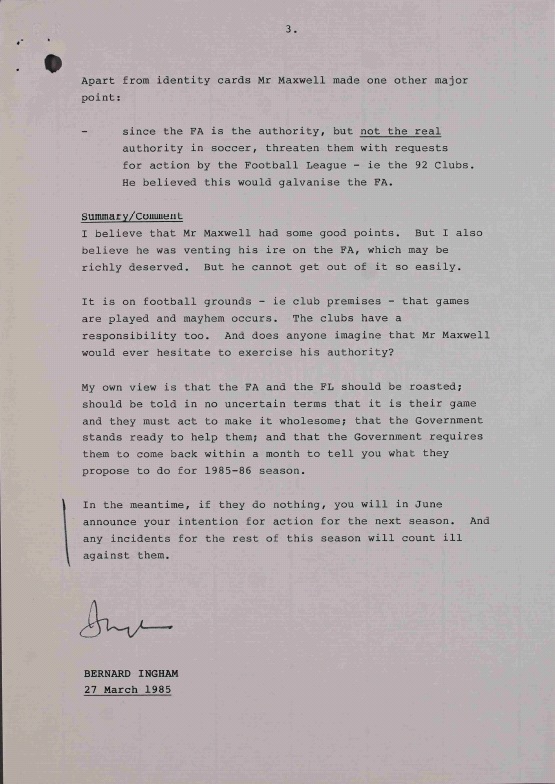 Meetings and correspondence with John Smith, the Chairman of Liverpool FC; Robert Maxwell, then Chairman of Oxford United; and even football journalists such as Brian Glanville and Peter Jones in the aftermath of the Heysel disaster provided a wide range of examples of the problems of football hooliganism and stadium safety, but few solutions. The government’s frustration at the perceived inflexibility of football authorities and clubs is apparent over issues such as implementing a membership card scheme for fans (which was rejected by clubs), who would pay for the installation of CCTV in each football ground in the top two leagues, and the banning of rail and bus ‘specials’ (PREM 19/1529, PREM 19/1789, PREM 19/1527).

Even government attempts to influence fans via the media carry the air of desperation about them: Ingham suggested a campaign named ‘Goalies against Hoolies’ as goalkeepers were ‘often first in line of hooligan fire’. It was suggested that Gary Bailey, the Manchester United and England goalkeeper, could give the Prime Minister an interview. 2

It was also suggested that Thatcher might appear in ‘Shoot!’ magazine, but this idea was swiftly vetoed once it was explained that the magazine was ‘an inappropriate platform’, as it was aimed at 11-16 year olds, a group not always known to ‘respond positively to figures of authority’. 3

The main change the government was able to deliver was the banning of the sale of alcohol in football stadiums, which it was believed would significantly reduce the amount of violence in grounds. Later, the Prime Minister expressed was keen that the Government’s response to the Popplewell Report into Crowd Safety at Sports Grounds should guard against complacency. A lengthy, hand-written note expressed how much she saw riding on this issue, stating, ‘we must press ahead and be seen to do so… I know we must not relax now. If we do, one more bad incident and we shall be culpable’ (PREM 19/1789). 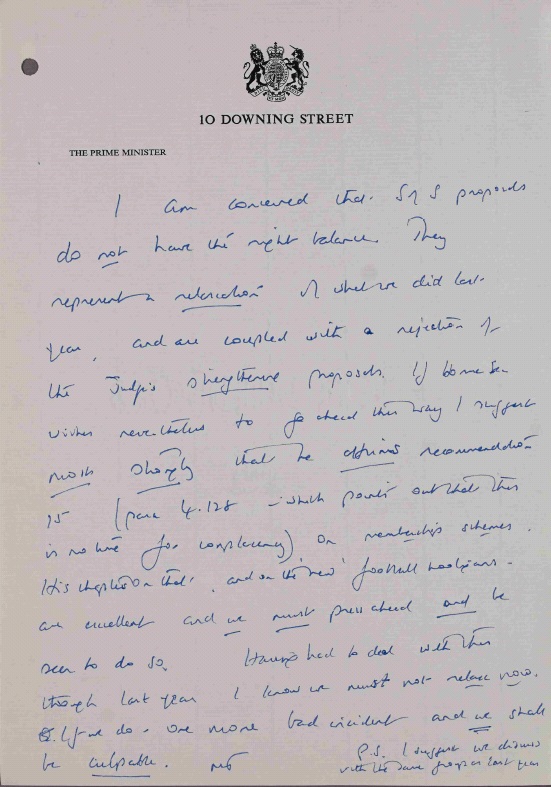 The files released today show various examples of a government still struggling to overcome a range of significant problems. We now know quite how much importance the Prime Minister, and senior Cabinet ministers around her, attached to solving the problem of football hooliganism, particularly when it painted such a negative image of Britain abroad.

However, it would take another horrific stadium disaster to complete the process of securing fan safety in grounds.