Welcome to another round of Files on Film, our film competition designed to bring diverse records in our collection to life. This post will showcase just one of ten documents you can choose to creatively explore using film.

In line with this year’s centenary the competition is themed around the First World War. The extracts from HO 45/10724/251861 illustrate the war time occurrences of ‘camp followers’ – civilians who followed travelling troops – and the creation of the Women Police Volunteers partially in response to this.

In March 1916 a complaint was received at the Home Office from the mother of a 14 year old girl, objecting that two members of the Women’s Police Service had stopped her daughter due to her crimped hair and stated she was ‘dressing herself up and walking about to attract the attention of men’ (HO 45/10724/251861).

The complaint was one of many from ‘respectable’ women and girls who were out late in the time of the Defence of the Realm Act (DORA). This legislation allowed greater Government control, this covered everything from enabling the Government to requisition buildings for the war effort to banning the flying of kites. Amongst these there were several regulations introduced under DORA which aimed to regulate the spread of venereal diseases, culminating in the June 1918 with the controversial regulation 40D.

Definition of Regulation 40D of the Defence of the Realm Act (catalogue reference: MEPO 3/2434)

This legislation was provocative, it essentially enabled women suspected of having venereal diseases (VD) (in essence this could be any woman) to be checked for these diseases at the will of the authorities. It harked back to the Contagious Diseases Acts of the 1860s which had awakened feminist campaigners in the nineteenth century. Repeated files in the Home Office correspondence demonstrate that women could be held in ‘Lock Hospitals’ (which were designed to specialise in the treatment of VD), against their will if they were found to be infected (HO 45/10724/251861).

The Women’s Freedom League objected to the regulation, and held a public meeting days after its introduction. The flyer publicising the meeting advertised it under the dramatic heading ‘The regulation undoes the work of Josephine Butler, and introduces STATE REGULATION OF VICE’ (WO 32/11403).

Throughout the war there was recognition of the detrimental affect of venereal diseases. Browsing through hospital registers in the series MH 106 it is not uncommon to see a form of VD listed as the cause of a soldier’s hospitalisation, ultimately taking these men away from the front line. Because of this, ‘camp following’ – such as by prostitutes – was seen as a threat to the health of soldiers through the potential spread of venereal diseases.

A grave menace to girlhood

However the files are not only concerned with ‘professional prostitutes’ but with ‘crowds of hysterical and excited girls’ who by engaging in sexual relations with soldiers were described as not only threatening the soldiers’ health but ‘a grave menace to girlhood’ (HO 45/10724/251861).

The First World War has often been seen as giving women freedom, providing greater opportunities for employment, higher rates of pay and ultimately more independence, with factory workers and workers on the land often leaving home and living in hostels. However these freedoms were seen to come at a cost to moral standards, encouraging drinking and sexual promiscuity. Our collections hold entire series concerning the control of liquor and the licencing of pubs in HO 190 and HO 185.

In response to these concerns about women and girls two bodies were created by women’s organisations.

In 1914 the Women’s Police Volunteers (renamed the Women’s Police Service in 1915) was created. They took on numerous roles including watching factories, looking after the safety of Belgian refugees and patrolling public spaces to control ‘camp followers’ and try to curb undesirable behaviour. This was an initiative connected to the Women’s Freedom League, a suffrage organisation who continued to campaign through the war.

Many early recruits to the Women’s Police Volunteers were drawn in through their pre-war involvement in feminist politics and the suffrage movement, such as founder Margaret Damer Dawson, a prominent philanthropist and anti-vivisection campaigner, and suffragettes Nina Boyle, Dora Meeson Coates and Mary Allen. Several of these women can be seen in the group photograph. Now these feminist freedom fighters were policing other women. It’s intriguing to think of the reasons why this might be the case.

Additionally the National Union of Working Women (NUWW) also had approximately 5,000 voluntary women patrols by this time. But as a cutting from the file shows these women were not treated equally to other police. This section of the file is annotated to state ‘These female patrols are for preventative purposes and not want to be regarded as having undertaken any police duties in respect of prostitutes. They are not in the least likely to be of use in protecting soldiers from venereal disease’ (HO 45/10724/251861). 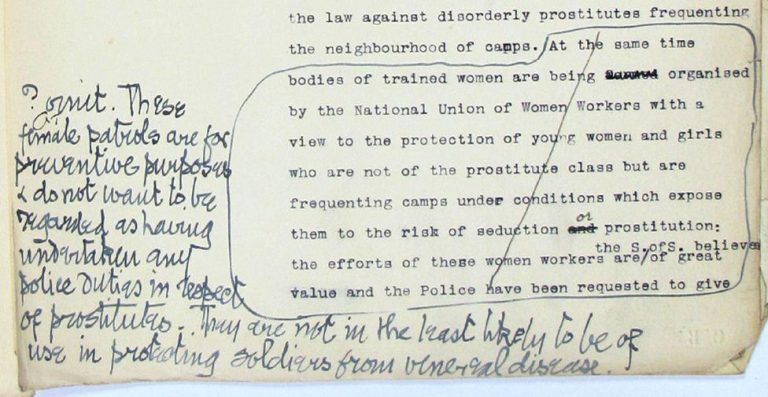 As this demonstrates, neither organisation was initially openly accepted by the authorities and both were denied full powers of arrest.

With the centenary of the First World War maybe it’s time to start thinking about the nuances and complexities of women’s experiences at this time – these well meaning ‘morality police’ are just one example.

The deadline for Files on Film submissions is midnight on Wednesday 7 January 2015 – so it’s time to start considering your entry. We are really excited to see what you create!

Look out for another blog post soon by my colleague Jenni on a different Files on Film document.