Set cookie preferences
Home > Blog > ‘Having fear of death before me’: life before the 1967 Abortion Act

‘Having fear of death before me’: life before the 1967 Abortion Act

This blog contains details that some readers may find distressing.

This year marks an important anniversary, that of the 1967 Abortion Act which was passed on 27 October 1967, coming into effect on 27 April 1968. The 1967 Abortion Act legalised abortions in certain circumstances in England, Scotland, and Wales. The act was part of a wave of progressive legislation that was seen to reflect a new era of permissiveness in the 1960s, alongside 1967 Sexual Offences Act and the 1969 Divorce Reform Act.

The National Archives collections offer a unique insight into the 1967 Abortion Act and significantly, the experiences of women before this time.  The state has long had an interest in the impact sex has on society, sometimes through the role of repression and censorship, such as the regulation of abortion. This leaves us with an abundance of material, many records of which contain these women’s personal voices and experiences.

In this blog I will highlight two cases which are in many ways reflective of the variety of the countless records that survive on this subject. A search on our catalogue under ‘procuring a miscarriage’ or ‘abortion’ in some of our criminal record series illustrates the scale of illegal abortion cases held in our collections. I will be mainly be focusing in this blog on the early 20th century, moving on to focus on the 1937 Inter-Departmental Committee for Abortion in the next blog.

The criminal records I will be referring to in this post are powerful, and often difficult to read, but show the true impact of criminalisation prior to 1967. The records illustrate the interplay of pressures women faced in making their decision such as factors relating to employment, family, relationship status, physical health and mental health.

As Barbara Brookes notes, by the very nature of this material being contained in criminal files it focuses on the problematic cases; the ones where abortions were often discovered because something went wrong, and in many cases due to the dire impact it had on the health of the woman involved. However abortions were a reality for many women prior to reform, and while illegal, unregulated abortions were risky, many women had little choice. Many women did survive abortion procedures, sometimes multiple abortions; however, before the 1967 Abortion Act, backstreet abortions were the leading cause of maternal death in England and Wales.

In the early 20th century, contraceptives were used but not widely socially accepted. Indeed these booklets from the period survive because they were seized by the Home Office as ‘indecent publications’. These seized publications now give us a fascinating insight into contraceptives in this period and the states problematic attitude towards them.

‘One’s family should be one of choice, not chance. Parenthood should no longer be the result of ignorance or accident, but voluntary; and no woman should live in continual dread of having a child or being overburdened with children.’ (HO 45/15753)

Clearly societal attitudes and the states policing of sex had a huge impact on limiting women’s options when confronted with unwanted pregnancies. 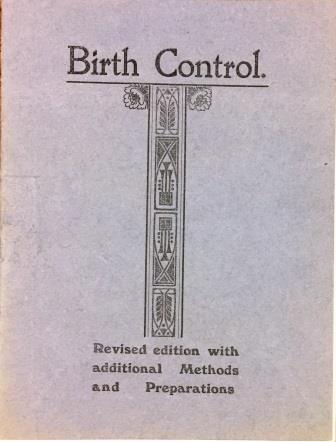 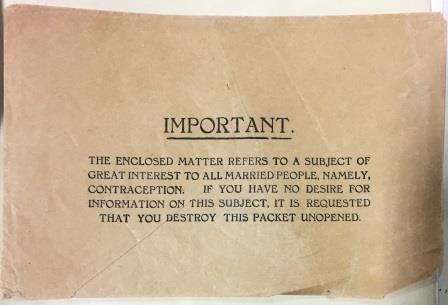 Envelope in which publications containing birth control advice were sent. This one is targeted at married couples, while another example is addressed to the ‘Master of the House’. 1931-1934. Catalogue reference: HO 45/15753 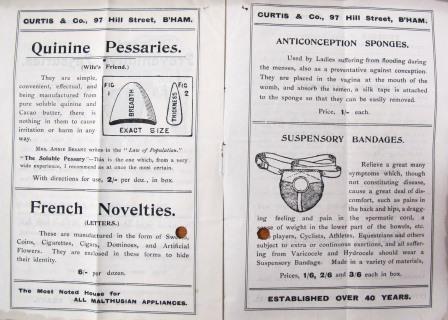 Publication advertising various contraceptives, including pessaries and sheaths. The publication was seen to advertise the sale of abortifacients. Catalogue reference: HO 45/10932/157111

‘A glass of hot milk and a hot water bottle’

The case of Dora Alice Boot is from 1909 and gives an insight into the process of procuring an illegal abortion and the fear involved [CRIM 1/113/2]. Even when women were horrifically ill they often testified. In the case of Dora she records a statement which opens

‘I, DORA ALICE BOOT, having the fear of death before me, and being without hope of recovery, make this statement: -’

In her statement Dora describes an old woman, Mrs Walters, who brought on a miscarriage for her. Dora explains that no one knew that she has arranged an abortion ‘until I confessed to my sweetheart on Saturday’. She paid £12 for the procedure and endured 24 hours of agony. By the evening of 25 March 1909, the day she wrote this statement, she was dead. 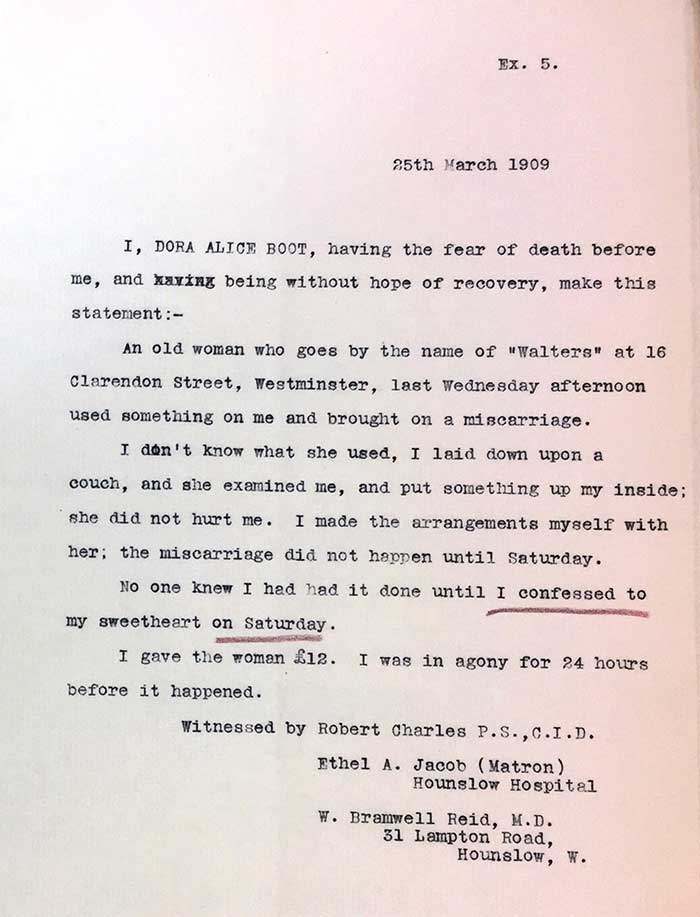 The case is also interesting for the in-depth statement from the domestic servant working for Mrs Walters during this time. Faith Lewis became employed as a cook and general domestic help, and was employed by Walters on the understanding she was a Doctor’s widow of independent means. She was not aware that Walters performed illegal abortions, being at first asked to take the girls ‘a glass of hot milk and a hot water bottle on several occasions’. However over the months that she worked there Faith increasingly had to empty the slops each morning which were placed outside on the landing, she regularly noticed ‘blood and bloodstained clothing’. Numerous girls staying in the house was a regular occurrence, and Walters also visited outdoor patients, at their own homes. On several occasions she unwittingly dealt with aborted foetuses under the instruction of her mistress. 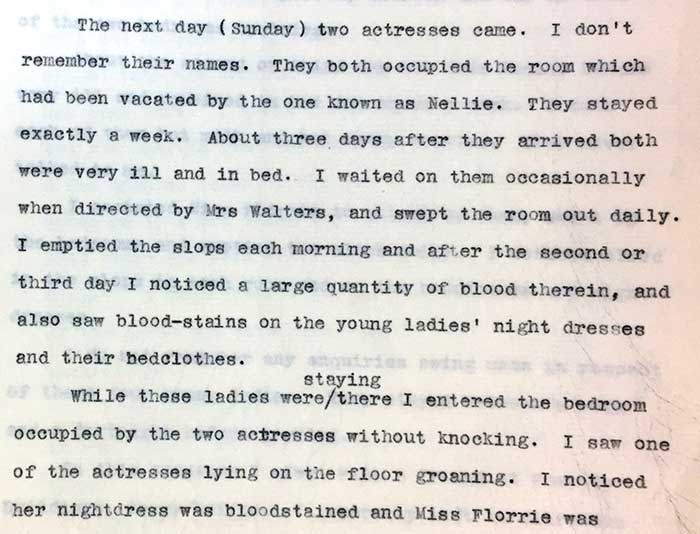 Extract from the statement of domestic servant Faith Lewis, describing some of the comings and goings in the house. Catalogue reference: CRIM 1/183/3

A decade later, on 22 Jan 1920, the testimony of Florence Zweiniger was recorded as part of a criminal abortion case [CRIM 1/183/3]. The charge: murder and procuring an abortion.

Florence’s statement on oath opens with the words, ‘The deceased girl was my daughter’.

The daughter, known by the name Bobbie Benson, was 20 years of age and worked at Gunter’s Restaurant, Berkeley Square. Her mother described how she had been ‘sleeping away from home’ at a place in Earls Court since November. Bobbie found herself pregnant.

Having failed to find someone to procure her abortion for her Bobbie was found by her mother; ‘I went into my Dining Room and found my daughter there. She had a carving knife in her hand with the point towards her breast… I took the knife away from her. I was alarmed to see what she might do.’

Together they went to find someone to help Bobbie, finding a small blouse shop in Bow, where they first met the accused Marie Simons, who was willing to offer an illegal abortion. During these meetings Florence remarked: ‘Woman always pays’. At this point in the statement it was noted that Florence was asked to look at the prisoner, to which she responded ‘I don’t want to see her again. I should kill her if I did.’ 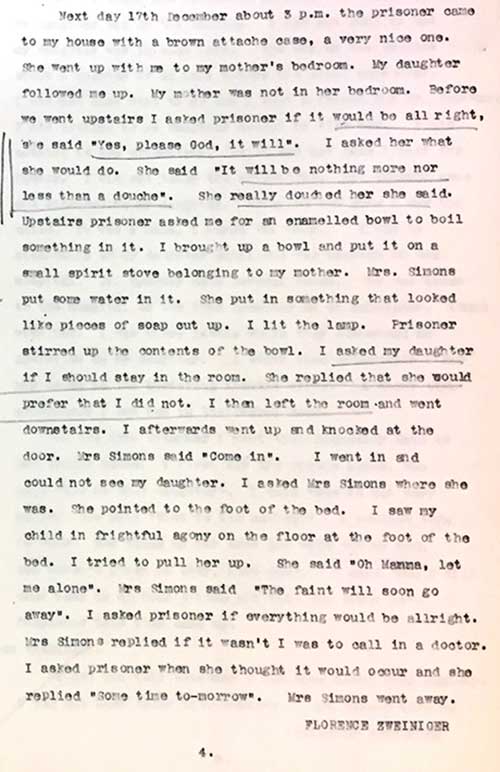 The procedure was dangerous, and as a result Bobbie ended up curled up on the floor and in pain for hours. Her mother sent a friend for the doctor, panicking that she ‘did not know what to do… I did nothing to my daughter except kiss her’.

Dr. Spurway came and attended to Bobbie, Florence describes how ‘After he had gone I saw the child. It was male, I burnt the body.’ The patient was rushed to hospital on 22 of December in an ambulance. Florence recounted;

Results of the post mortem showed the death was in part caused by the manipulation of the uterus either by an instrument or by an ejection into the uterus that set up infection or accelerated an existing infection.

In her defence Marie Simons said;

‘I did the girl a good turn as I have done myself, I thought it would give the same effect as myself.’

The verdict upheld the charge of murder against Simons.

Before legal, safe access to abortion, women were often put in extremely vulnerable positions. The testimonies of people involved in these cases are a powerful illustration of the impact of the 1967 Abortion Act.