The fates of six real-life pirates of the Caribbean

Pirates have often been dramatised in popular culture: romantic figures, taking to the high seas in search of freedom and treasure.

However, the real-life pirates of the Caribbean often had short careers, meeting with violent ends. We look at what happened to six of them.

Charles Vane was a brazen yet skilled pirate and one of the few who refused to accept the King’s pardon. In one incident – when seemingly cornered by the navy in Nassau – Vane set ablaze his newly commandeered flagship and sailed it directly at the British blockade, providing enough distraction to allow his escape.

However, his luck started to run out after he was voted out of command by his crew, in favour of ‘Calico’ Jack Rackham. Following this incident, Vane’s ship was wrecked in a storm and he was marooned on an uninhabited island.

Upon being rescued, he was identified by the captain of a passing ship who had been invited to dine with Vane’s erstwhile liberator and imprisoned. Vane stood trial in Jamaica and was hanged on 29 March 1721, in Port Royal.

From a report on the trial of Charles Vane from a pamphlet entitled ‘The Tryals of Captain John Rackam and other Pirates’ (catalogue reference: CO 137/14)

‘Calico’ Jack Rackham only briefly led Charles Vane’s crew, before accepting a pardon from Governor of the Bahamas Woodes Rogers. However, he soon returned to a life of piracy along with crew members Mary Read and Anne Bonny, who was also his lover.

In 1720, he was captured by pirate hunter John Barnet, having been caught off guard, in a drunken state. Rackham was hanged in Port Royal, while Read and Bonny successfully pleaded a stay of execution, claiming they were ‘quick with Child’. Read died in prison; there is no record of either the release or execution of Bonny.

From a report on the trial of Mary Read and Ann(e) Bonny from a pamphlet entitled ‘The Tryals of Captain John Rackam and other Pirates’ (catalogue reference: CO 137/14) 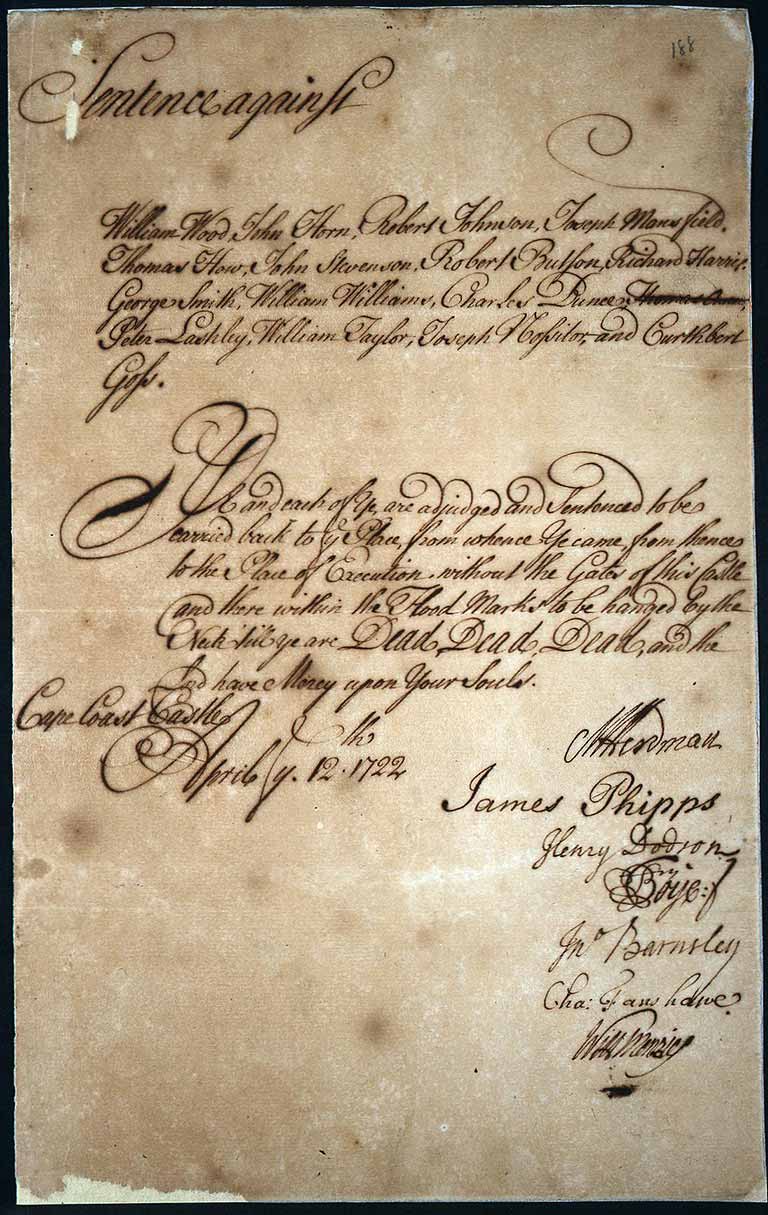 He turned to piracy after the slave ship on which he served was captured by Captain Howell Davis. Roberts – popular among both Captain and crew – was elected to replace Davis after he was killed in an ambush. During his command, Roberts was successful in capturing hundreds of vessels.

However, authorities eventually caught up with him. Roberts was killed in battle in 1722 when HMS Swallow, captained by Challoner Ogle, came across his fleet at Cape Lopez. A grapeshot tore out his throat and his body was quickly buried at sea by his crew, shortly before their capture.

A sentence to death against 15 crew members of Bartholomew Roberts reads:

‘Ye and each of ye, are adjudged and Sentenced to be carried back to the Place, from whence ye came, from thence to the Place of Execution, without the Gates of this Castle and there within the Flood Marks to be hanged by the Neck till ye are Dead, Dead, Dead, and the Lord have Mercy upon your Souls.’

Possibly the most infamous pirate to have ever set sail, Edward Teach (or Edward Thatch) – known to the world as Blackbeard – caused mayhem across the Atlantic Ocean and Caribbean Sea.

Blackbeard’s power was built on a ruthless reputation and a carefully cultivated image of fear – even tying smoking fuses under his hat to create a more imposing and ferocious physical appearance. It was this reputation that enabled him to blockade and successfully ransom the Port of Charles Town (now Charleston), at the height of his power.

However, despite accepting a royal pardon, Teach soon returned to his piratical ways. This proved to be the final straw for the Governor of Virginia Alexander Spotswood who dispatched Lieutenant Robert Maynard to apprehend Teach. A bloody battle ensued at Blackbeard’s base at Ocracoke Island, ending with his death and the defeat of his crew. His body was riddled with cuts and gunshot wounds, while his head was cut off and hung from Maynard’s sloop.

‘Thatch observing his [Maynard’s] decks clear of men presently concluded the vessel his own, and then sheers on board Lt. Maynards sloop enters himself the first man, with a rope in his hand to lash or make fast the two sloops. Mr Butler aquainting Lt. Maynard with this, turned his men upon deck, and was himself presently among them: wherein less than six minutes tyme Thatch and five or six of his men were killed; the rest of these rogues jumped in the water where they were demolished…’