Set cookie preferences
Home > Blog > ‘Expo 67 has opened and is a wow!’

On 30 April 1967, Pat Lighthill, a supervisor of the Expo 67 British Pavilion in Montreal, wrote to Robin Duke of the British Council:

‘Expo has opened and is a wow. Crowds are vast and the inside of the Pavilion on Saturday afternoon was like the underground at its worst’ (BW20/13)

And Pat was not alone in being ‘wowed’: the press reaction was ecstatic. When the Queen visited Montreal on 3 July 1967, Jonathan Aitken in the Evening Standard proclaimed ‘EXPOMANIA!’ So what was Expo 67 and why did the British contribution make such a massive impact? 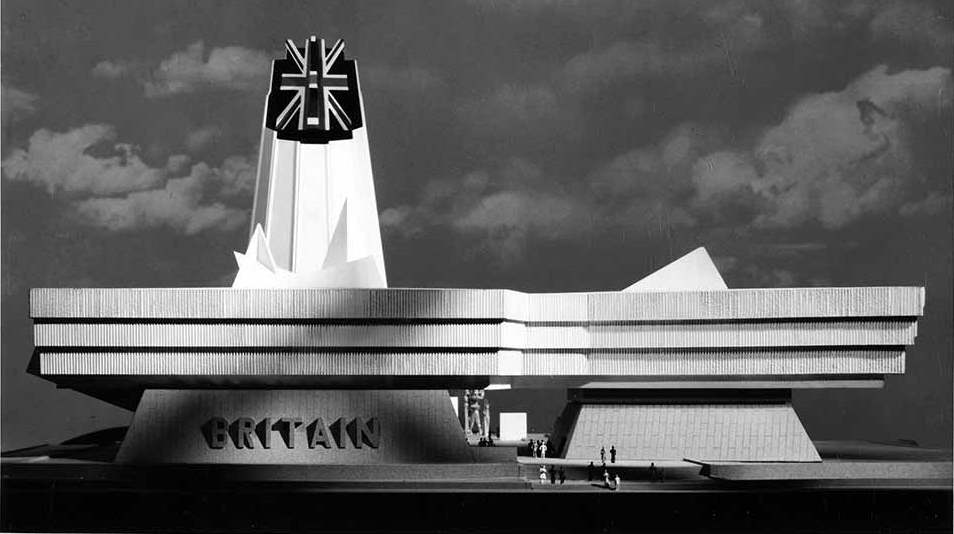 Model of the British Pavilion for Expo 67 (catalogue reference: BW 20/14)

A world (or universal) exposition (Expo) was also known as a world’s fair – a large international exhibition designed to showcase the achievements of nations. Major Expositions, held every five years, encompassed themes capturing a wide range of human experience. 1 Participants usually built their own pavilions, giving a competitive edge to these events.

British planning began several years earlier. The Central Office of Information (COI) was the driving force behind it. In March 1965 Sir Basil Spence, a Scottish architect who designed buildings in a modernist or Brutalist style, was announced as the designer of the British Pavilion. Spence’s design was a massive white pavilion and a monumental 200ft tower which displayed a three-dimensional Union Jack – all set out on a stepped concourse. The style of the architecture was futuristic and stark (you may see some similarities with The National Archives’ main building at Kew).

The unifying theme of Britain’s contribution was ‘The Challenge of Change’. It aimed to show how the British people were meeting this challenge in the modern world, as they had done many times in the past.

The Pavilion had five exhibition areas –a publicity leaflet described them: 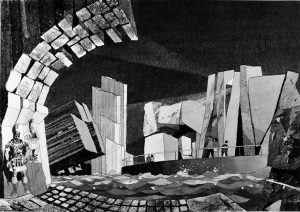 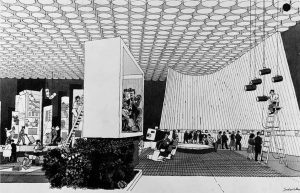 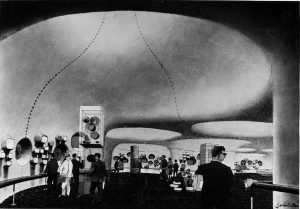 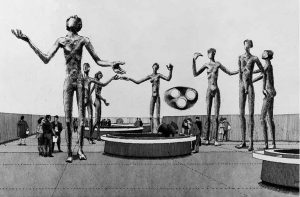 Artist’s impression of the Britain and the World section (catalogue reference: BW 20/14) 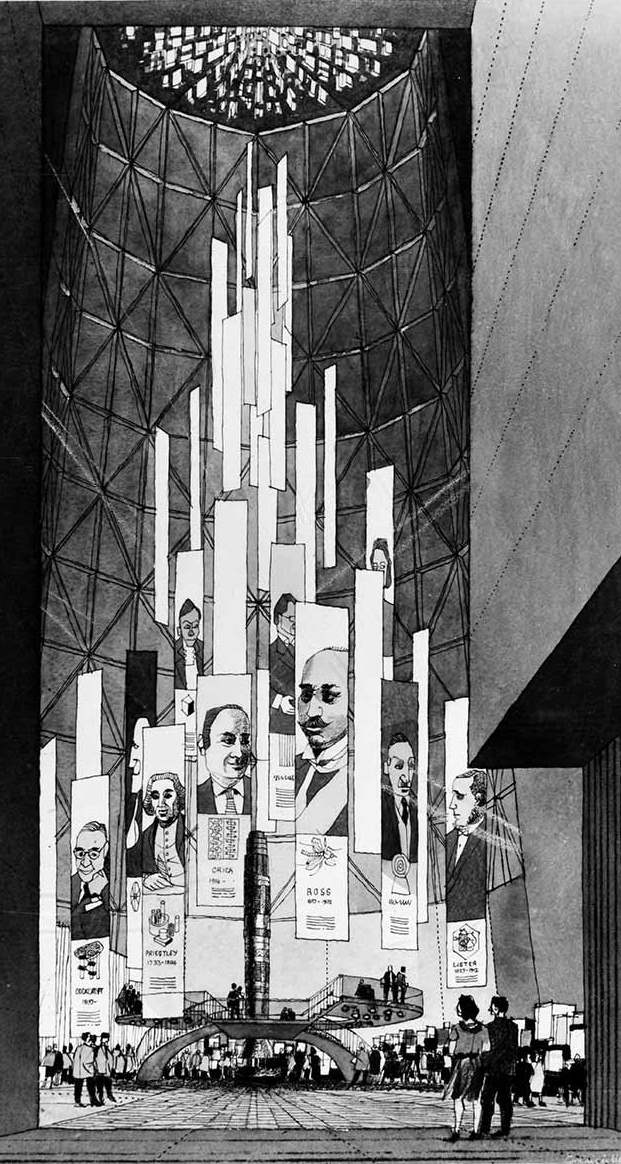 An artist’s impression of The Genius of Britain section (catalogue reference: BW 20/14)

In common with many others, I am fascinated by the music, fashion and culture of the 1960s, so the ‘Britain Today’ section is of particular interest to me.

The COI wanted its designer to present an image of Britain in 1967, to serve as a contrast to other sections and as a way of signalling possible developments of the future. The designer chosen to create this section was James Gardner, who had contributed to the Festival of Britain in 1951.

Gardner wanted to avoid clichés such as traditional images of Beefeaters, village cricket greens and thatched cottages; instead he created a series of sets which contrasted traditional and modern Britain.

It is difficult to convey the full sense of it, but to give a flavour of it, there were sculptures of the members of an old-fashioned family with associations of a country estate standing in their drawing room; a couple was shown cleaning their car (a Union Jack painted mini); and there was a section on fashion and music which featured the Beatles, the Rolling Stones and mannequins wearing clothes designed by Mary Quant.

The files include a rapturous comments extracted from the press, which show how the exhibition confounded expectations of the British being ‘straight laced’: ‘it’s the one pavilion which mixes art with fun’ 2 and ‘one of the things they [the queues of visitors] most enjoy is the way we have taken the mickey out of ourselves’. 3 Other attractions which proved highly successful were ‘The Bulldog’ pub and a Routemaster London bus which carried passengers to and from Expo.

By all accounts, Expo 67 was a major success for Britain – over 5 million visitors came to the British Pavilion. The event was symbolic of the powerful optimism of the 1960s, a feeling that everything was possible – a spirit which persisted into the late part of the decade despite economic problems and growing strife at home.

We invite you to take a trip back to the 60s at our Archives at Night event.