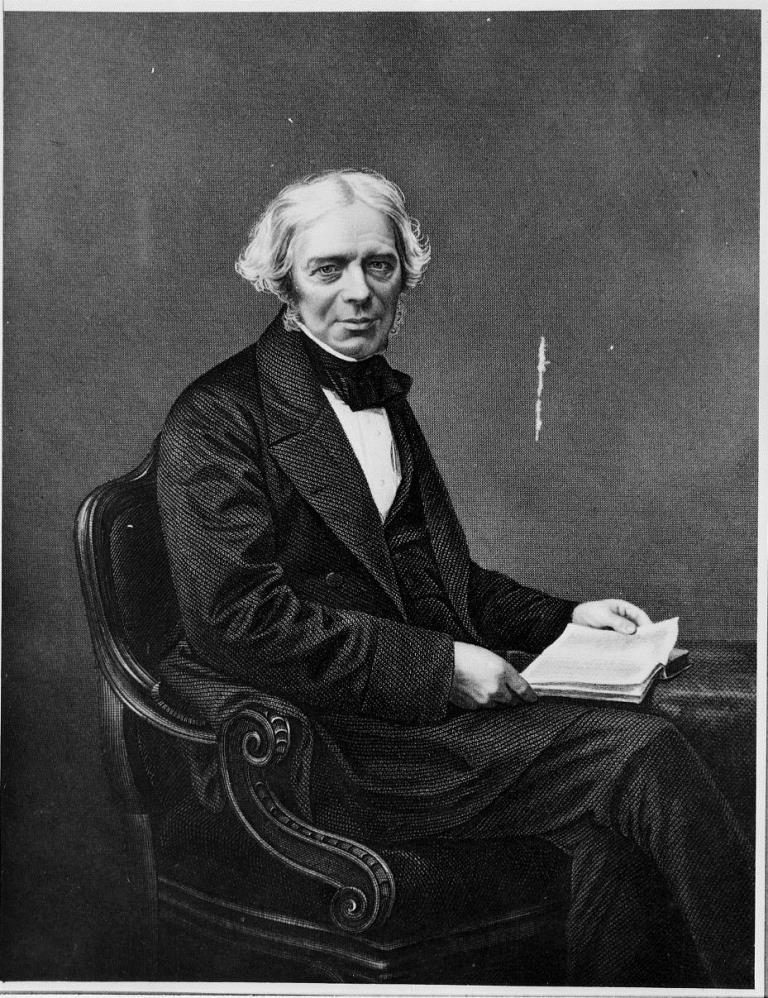 Michael Faraday (1791–1867), the pioneering physicist and chemist, died 150 years ago. During his long career he made several major discoveries, such as electro-magnetic induction. The Royal Institution hails him as ‘one of the most famous scientific figures of the 19th century’.

Michael Faraday appears in various records in our collection; they provide insights not only into his family history but also into his career.

In 1851 Faraday was recorded in the census at the age of 59 living with his wife Sarah and niece Jane. The census return shows him living at his work place, the Royal Institution of Great Britain, in Hanover Square, London. Faraday has put ‘Professor of Chemistry’ under his occupation though at the time he also held the positions of Director of the Laboratory (1825–1867) and Assistant Superintendent of the House (1852–1867).

In 1867 Faraday died aged 75 at his Grace and Favour house at Hampton Court (bestowed to him by Queen Victoria). At his death he had around £6000, the majority of which he left to his wife. Among the other bequests were £5 to Miss Savage, ‘the valued and faithful Housekeeper of the Royal Institution’ and £400 to be paid on his wife’s death to his niece Jane who was ‘an affectionate companion and support’.

As Faraday had influence and connections in numerous fields there are also letters from him in the records of the Colonial Office, the Home Office and the Meteorological Office.

A letter from 1835 to Robert Hay, Under-Secretary at the Colonial Office, relates to Faraday’s research into electric fields in fish. Faraday writes of the ‘obscure but important relation which exists between electricity and nervous energy’.

Another letter was written by Faraday and Charles Lyell, a British geologist, and relates to Faraday’s commission by the then Prime Minister Sir Robert Peel to investigate an explosion at Haswell Collieries in 1844. The explosion had killed almost 100 men and boys.

A third letter, dated 1861, is to Admiral Fitzroy, Royal Naval Officer and scientist, who captained the Beagle during Charles Darwin’s voyage. Faraday thanks Fitzroy for his letter and instrument (possibly a barometer or Storm glass, as Fitzroy took a number of these on his voyages). Faraday talks of putting ‘the instrument in the yard of the institution in a place I think sufficiently open yet where no sun shines’. 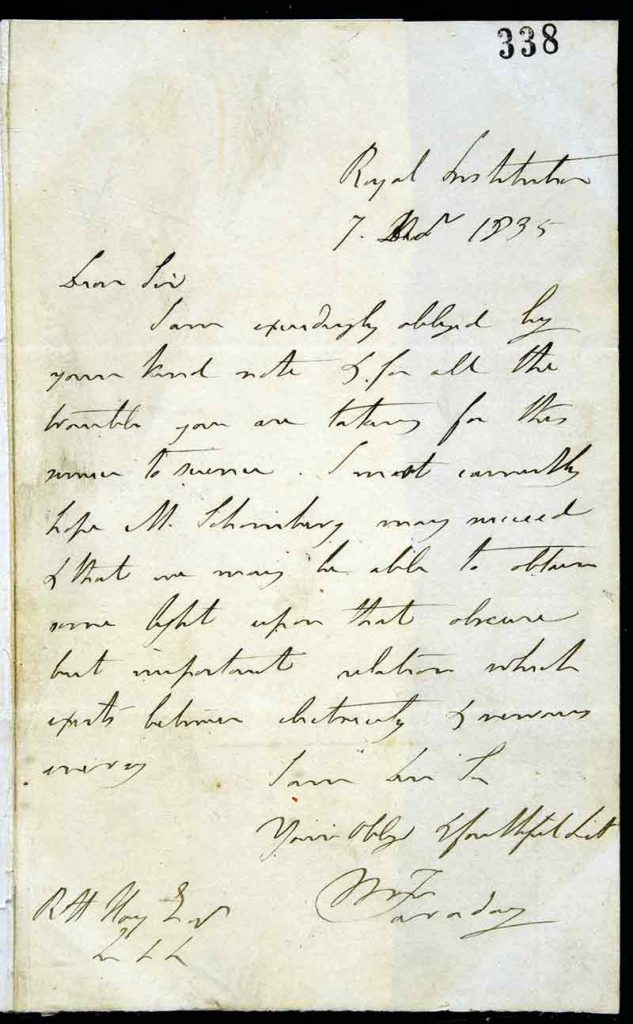 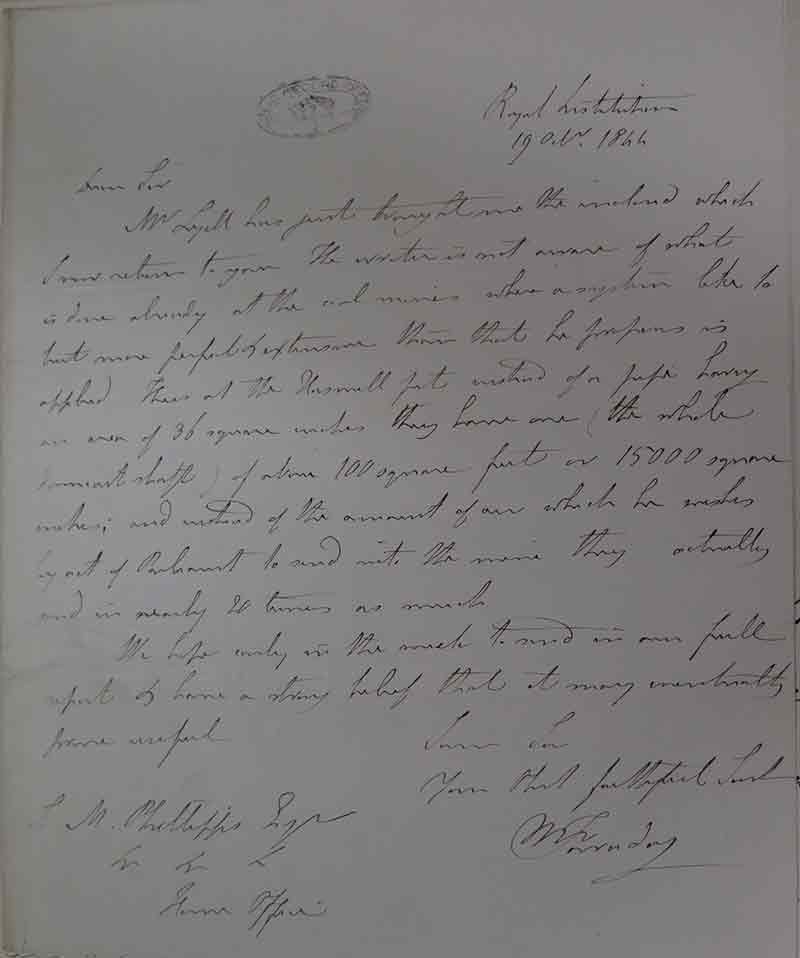 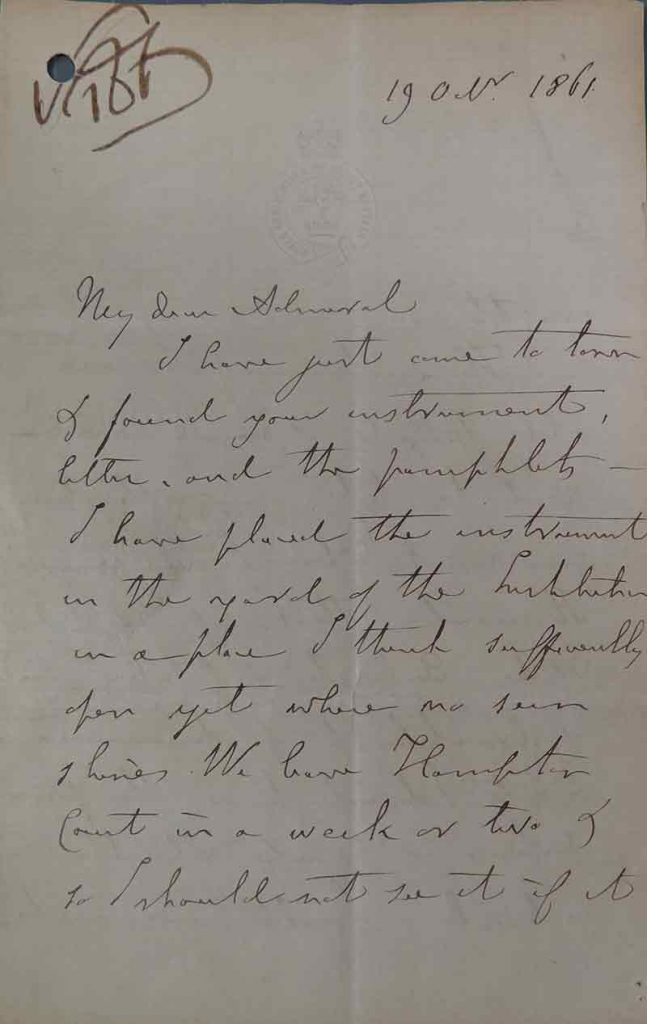 There is a display in the Keeper’s Gallery, our on-site museum, relating to Michael Faraday, until February 2018; it features some of the documents highlighted in this blog.