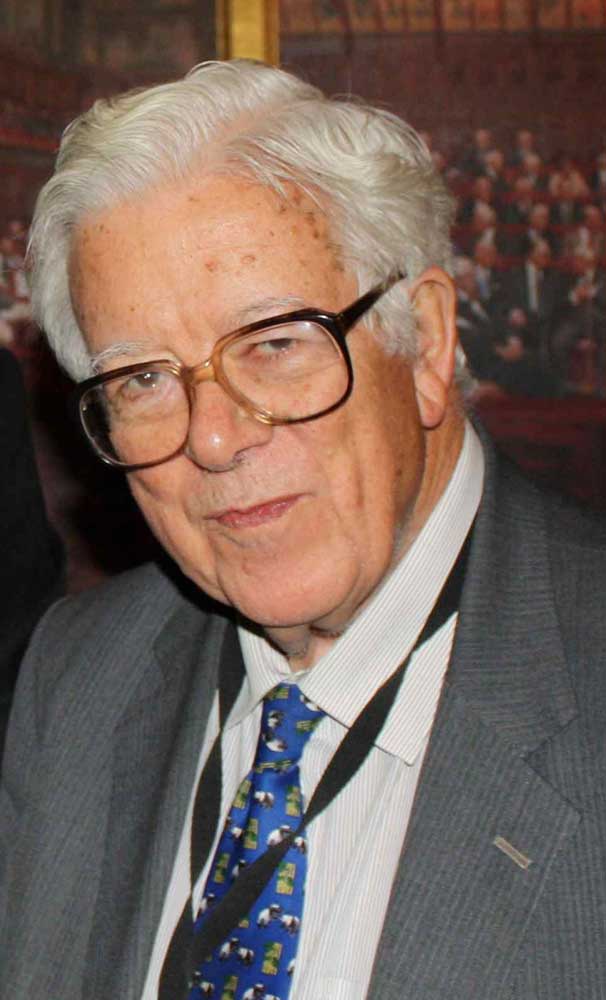 Today a new series of records has been released – T 639, the Private Office of the Chancellor of the Exchequer Geoffrey Howe’s records (1979-1983) – which gives us a new perspective on Howe’s tenure as Chancellor

The Chancellor’s Private Office consists of his private secretaries and political advisers. It is at the very heart of the Treasury, where policy and practice come together. The papers bring together policy records, and show exchanges between the Treasury and the Prime Minister’s Office and other government departments. The T 639 records also contain plenty of ‘marginalia’ – comments written in the margin in the Chancellor’s own hand – as well as the input and influence of ‘high flyers’.

In this blog, I’m going to outline the political background and highlight elements of the papers that give insight into key events, such as the 1981 Budget and the general election in 1983.

In the mid-1970s when in opposition, the Conservative Party developed new economic strategies. Key elements included rolling back the role of the state, introducing more competition, reforming trade unions, and an emphasis on reducing inflation through control of the money supply (monetarism).

Geoffrey Howe was one of the first Conservative politicians to embrace the new thinking and became a close ally of Margaret Thatcher, who made him Shadow Chancellor, and then Chancellor when the Conservatives came to power in 1979.

There were marked differences in personality between Margaret Thatcher and Geoffrey Howe: Thatcher was very forthright and, sometimes, strident; Howe was softly spoken and invariably courteous.

The March 1981 budget was very tough: it increased income tax, by freezing personal allowances, and also imposed heavy tax increases on petrol, cigarettes and alcohol. Nigel Lawson later wrote that ‘to introduce a tax-raising budget on this scale in the depth of the recession was inevitably highly controversial’. 1

Thatcher and Howe were going against the mainstream economic orthodoxy of the time. On 30 March 1981, 364 economists wrote a letter to The Times which strongly criticised the strategy behind Howe’s Budget.  From looking at the Prime Minister’s Office records, one can detect just how beleaguered Margaret Thatcher and her ministers felt at times during 1981. A Sunday Times leader of 9 February was headlined ‘Wrong, Mrs Thatcher, wrong, wrong, wrong’ and challenged a set of her economic pronouncements one by one, and the file PREM 19/423 shows that this caused concern at 10 Downing Street.

On 15 July, the Prime Minister was reported as saying ‘that almost every newspaper, with the notable exception of Daily Mail, was now attacking the Government’s economic policies.’ 2

However, by the end of 1981 a recovery was underway and inflation fell significantly by the end of 1982, paving the way for an economic boom in the mid-1980s (though unemployment remained troublingly high).

Files concerning the 1981 Budget speech (T639/77, pts 1-3) show how this special category of speech has many contributors – not just the Chancellor’s input, but contributions from ministers, civil servants, and special advisers. The drafts chart the evolution of the speech: an early draft includes comments such as ‘I am therefore determined to take the necessary action, which is bound to be tough, to maintain our success in the battle against inflation’, but PJ Cropper, (Special Adviser, Treasury) comments on 04/03/81:

‘personally I hate this harping on toughness. The measures will only be thought of as tough if they are unnecessarily harsh’. 3

In the later versions of the draft speech, it is clear that some comments about the harshness of the budget have been toned down. 4

Again, on the subject of Budget speeches, T 639/161 shows that the Chancellor was keen to aim for a shorter speech for the 1983 Budget, and this appears to have set in train some very thorough research by Treasury officials. The file contains detailed listings of the length of budget speeches made by Chancellors of the Exchequer since 1853 – even the structures of such speeches are compared. The information about the longest speech (Gladstone, 4 hrs 45 mins, 1853) and shortest speech (Disraeli, 45 mins, 1867) found its way into the introductory remarks of the Howe’s Budget speech. 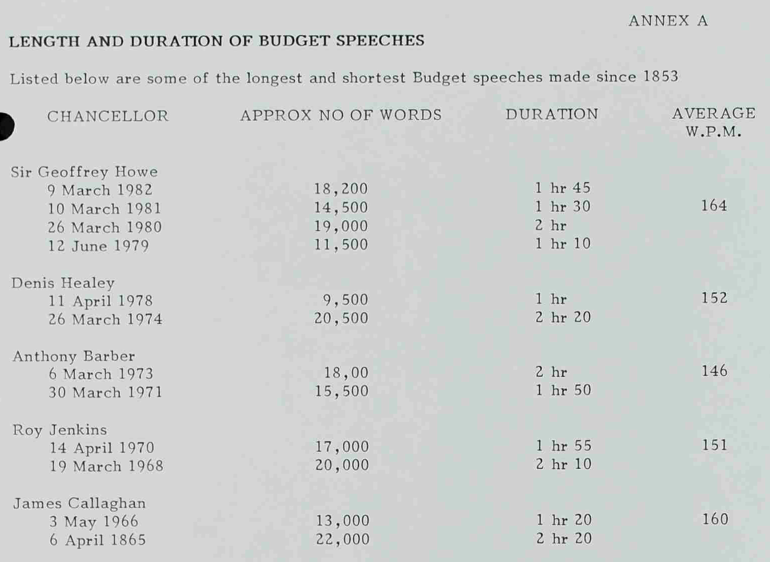 Analysis of the length of budget speeches (catalogue reference: T639/161)

In a series of files concerning policy work, public opinion and the lead up to the 1983 General Election (T 639/88-91), I was struck by the amount of attention paid to the Social Democratic Party (SDP), who had an opinion poll rating of just over 51% (when combined with Liberal support) in December 1981. In early January 1982 Adam Ridley, the Chancellor’s special adviser, stated: ‘I am convinced that it is high time we spent more time and energy on the SDP’, 5

The files contain a great deal of analysis of SDP policies, their leadership, surveys of their members’ views, and the predicted SDP timetable for 1982. Criticisms of the SDP appeared in the Chancellor’s speeches, but it is notable that Adam Ridley commented favourably on the SDP paper on ‘Attacking poverty’. 6

There are swathes of SDP policy documents – it’s almost as though the Treasury are using the SDP as a sort of ‘free policy unit’, evaluating their ideas.

This preoccupation is something that does not feature, to such an extent, in the Prime Minister’s Office records of this period. The Chancellor’s special advisers also pay a good deal of attention to opinion polling, and one can judge that they are more relaxed about the threat posed by the SDP-Liberal alliance by the time of the Falklands conflict, as their poll ratings lowered: by 19 April it is reported that they were polling 37%.

‘The curse of Frankenstein’

Another noteworthy element consists of draft scripts for an animated film (possibly intended as a Party Political Broadcast), with the rather unlikely title of ‘The Curse of Frankenstein’, produced by an advertising agency, Mike Russell Hills Associates. It told the story of post-war Britain from a Thatcherite viewpoint.

Howe commented that he found it a confused project, and on one draft he writes many annotated comments, which are interesting as they reveal his views on previous Conservative governments: ‘Moreover, I fear that many of these problems have remained relatively unabated even under Conservative Governments: certainly there was little progress in 1970-74 and there may have been less than one would have wished during the present administration’. 7

The files also show that Michael Dobbs, who was Special Adviser at the Department of Employment (and later became a best selling author), had input into the ‘Frankenstein’ project.

The Chancellor’s handwritten comments in the T 639 files are difficult to decipher in some cases, but they do reinforce the view of Howe as thoughtful, measured, and with a quiet confidence in his judgements.

Howe’s Private Office papers in T 639 are a valuable addition to the economic policy records of the 1980s held by The National Archives. Explore the digitised records.