On 5 August 1914, the Aliens Restriction Act was quickly passed by parliament the day after war was declared on Germany requiring foreign nationals (aliens) to register with the police, and where necessary they could be interned or deported. This act was chiefly aimed at German nationals and later other enemy aliens living in the United Kingdom, but the legislation and subsequent orders-in-council affected all foreign nationals in this country. 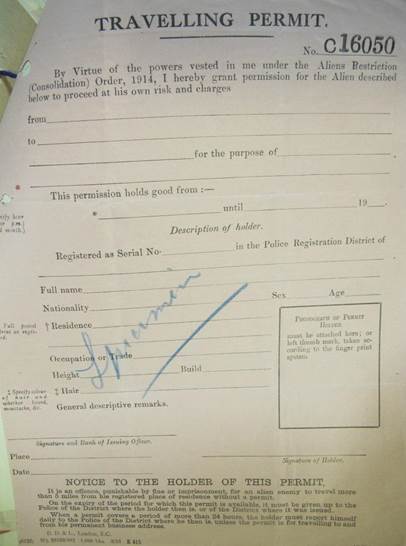 Men of military age who were categorised as enemy aliens were arrested and interned, although for the most part this was done peacefully and men reported to temporary holding camps while more permanent internment camps were set up. Few records of individual enemy aliens have survived; the records of the Prisoner of War Information Bureau were destroyed by bombing in 1940. Two of the official lists of German subjects military and civilians interned in 1915-16 survive in The National Archives, in WO 900/45 and WO 900/46.

The War Office was responsible for housing and looking after enemy alien civilians, who were treated in the same way as military prisoners of war. The Home Office was responsible for the registration of aliens, through the police forces, and for taking of enemy aliens into custody. This resulted in inter-departmental conflict between the two in the early days of the war. Criticism was unfairly directed by MPs in parliament, the press and public opinion at the Home Office and Home Secretary. It is remarkable that all four wartime Home Secretaries – three Liberals (McKenna, Simon and Samuel) and one Conservative (Cave) – were firm but fair, not pandering to the jingoistic and xenophobic anti-German feeling that was generated during the war.

After the sinking of the Lusitania on 7 May 1915, there was a serious threat to public order; anti-German riots occurred in many cities. The Prime Minster H. H. Asquith announced tougher restrictions in parliament on 12 May, which came into effect on 13 May. As a result 19,000 enemy nationals were interned, although some 24,000 men and 16,000 women remained at liberty. Those of enemy origin who had naturalised were not interned. An Aliens Advisory Committee for England and Wales was set up with two sub-committees; one dealt with internment matters, and one with repatriations. There was also a separate committee for Scotland. Their proceedings were held in private and not published and unfortunately their records have not survived. 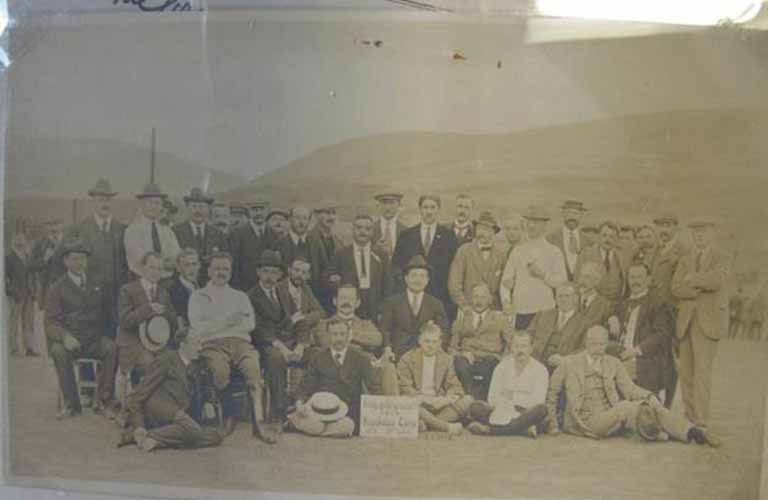 The number of internees rose during 1915: by July there were 26,173 and the number reached a peak in November 1915 of 32,440. Over 15,000 men applied for exemption, of which only 7343 were successful. Claims for exemption could be made on national or personal grounds. National grounds included occupational skills or experience that was of value to the country and the war effort. Personal grounds could include age and infirmity, length of residence in the UK, marriage to a British-born woman and a son or sons serving in the British armed forces. Length of residence was usually 35 years or more to gain exemption and a son or sons serving with the forces did not guarantee exemption. Some 6,000 men with sons serving were still interned during the war.

As the law was at this time, British-born women who had married foreign nationals (who had not naturalised) acquired their husband’s nationality. Many British born women therefore found themselves to be enemy aliens during the war. Except in a very few cases women were not interned.

Lloyd George’s coalition government of December 1916 saw a review of all cases of exemption that had previously been granted, but resulted in few further internments. In 1917 some internees were being released on parole to undertake work of national importance, mainly agricultural, but resistance to employing enemy aliens and the limitation of the type of work available meant that most had to remain in the camps.

In 1918 there was a further wave of anti-German feeling in the spring and summer with initial German successes on the Western Front and war weariness. Cases were again reviewed, further restrictions were placed on aliens and a reconstituted advisory committee met from July. By the end of October 1918 it had reviewed some 3,000 cases, but only 300 were interned and 220 recommended for repatriation. The majority of previous decisions were upheld.

With the coming of peace restrictions on aliens were not removed but continued and extended by the Aliens Restriction (Amendment) Act 1919:

Post-war restrictions on aliens remained and the pre-1914 freedom of movement without passports was never to be restored. Few aliens registration records survive locally in county record offices. The National Archives was a sample of Metropolitan Police Aliens Registration Office: Sample Record Cards in MEPO 35.