Seventy years ago, on 21 June 1948, HMT Empire Windrush docked at Tilbury, near London, with 1,027 passengers on board; the vast majority were Commonwealth immigrants from the Caribbean. Only one month later, on 30 July 1948, the British Nationality Act 1948 was given royal assent: it came into force on 1 January 1949. The Act created the new status of ‘citizen of the United Kingdom and Colonies’ (CUKC) for people born or who were naturalised in either the United Kingdom or one of its colonies. Provision was also made, in certain circumstances, for citizenship to be acquired by descent from a CUKC, or by registration.

In theory, this gave over 600 million people UK citizenship, although only a fraction of that number registered their British Nationality. The Act was eventually largely replaced by the Immigration Act 1971 which introduced the concept of patriality or right to abode and by the British Nationality Act 1981, which came into effect on 1 January 1983.

The National Archives holds the registrations for some 380,000 individuals who registered their British citizenship in the UK, the majority of them being Commonwealth immigrants who arrived in the UK between 1948 and 1971. The records provide a fascinating insight into the lives of those individuals – who they were and where they came from – and complement the Board of Trade inward passenger lists now available to search and download on ancestry.co.uk.

One of the passengers on board HMT Empire Windrush in 1948 was 22-year-old Samuel Beaver King, a carpenter from Jamaica, intent on residing in Nottingham.

His registration documents indicate that he served in the RAF during the Second World War and worked for the Post Office, having moved from Nottingham to Herne Hill in London. He gained note by organising the first Caribbean-style carnival in London, which later became the first Notting Hill Carnival in 1964. He became the first black mayor of Southwark in 1983, and in 2009 he was awarded the MBE. Sam King passed away in 2016. 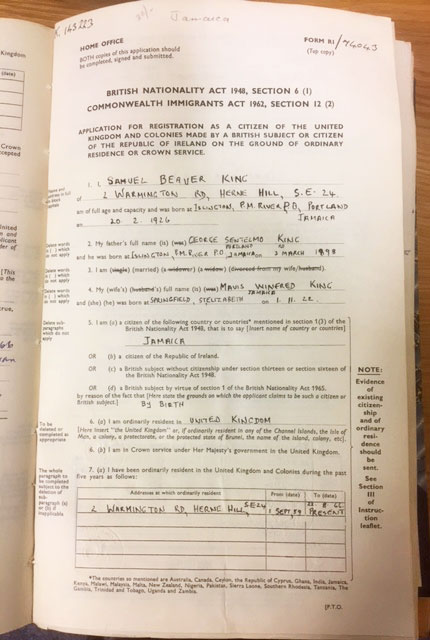 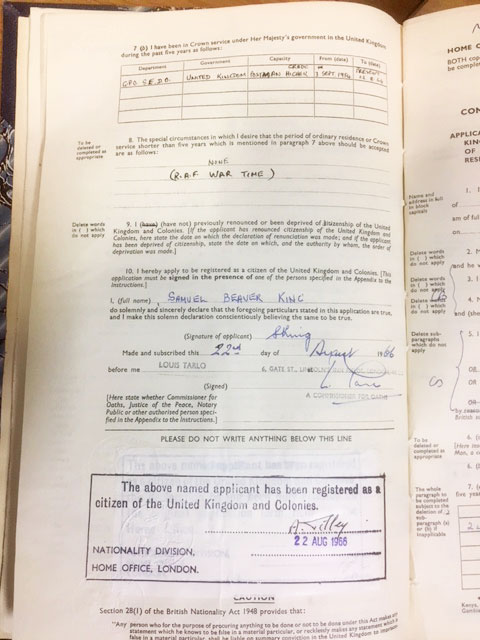 Because the registrations can contain personal information relating to living people, we only publish the names of applicants on our catalogue, Discovery, if the applicant was born over 100 years ago or is known to be deceased. People wanting copies of particular registrations are advised to apply through our Certificates of British citizenship page.

Increasingly, the records are becoming of interest to family and social historians. The registrations issued before 1973 contain information about the applicants’ fathers, such as their names, dates and places of birth. The records also include employment details if the applicant worked for HM Government, as well as UK  residential addresses in the five years prior to the registration.

The records include people from all walks of life. The actor Sidney James, who was born in Johannesburg in South Africa, registered his British citizenship in May 1961, a year after making his ‘Carry On’ debut in the film ‘Carry on Constable’.  Tanzanian-born Frederick Bulsara – who, as Freddie Mercury, would later become famous as the lead singer of the rock band Queen – registered his British citizenship in June 1969. 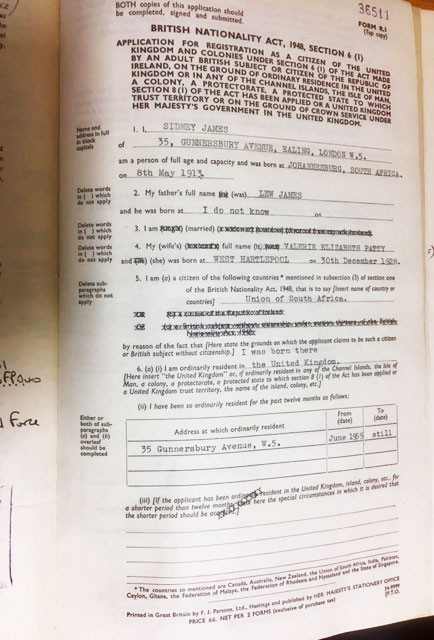 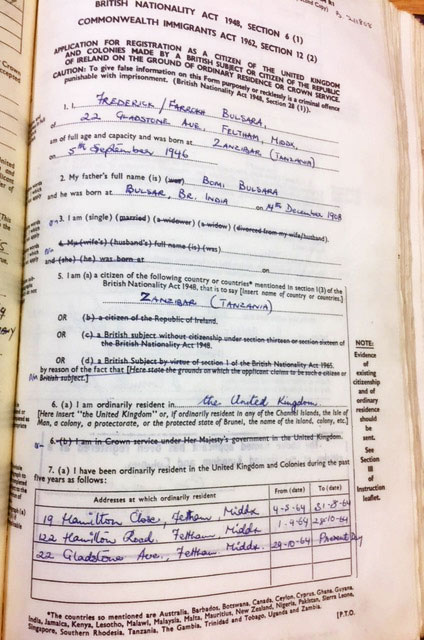 You can read more about these records in our research guide Naturalisation, registration and British citizenship.

On the Record: 20th Century Migration

There are over 900 years of immigration records available for research here at The National Archives. In our latest three-part podcast series we explore stories of migration in the 20th century.

In this series you’ll hear about major Acts that highlight shifts in policy around migration and citizenship over the past 100 years. We feature the profound and lasting impact of migration for citizens and non-citizens alike throughout Britain, its Empire, and the Commonwealth.