Emily Davison and the 1913 Epsom Derby 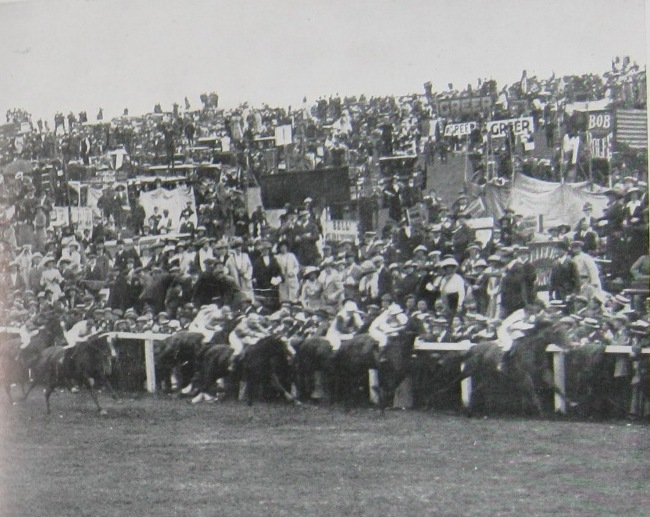 Today marks 100 years since one of the most famous events in the campaign for women’s suffrage in Britain.

4 June 1913 was the day of the Epsom Derby and at 15.10, just after the leading horses had rounded Tattenham Corner, Emily Wilding Davison, a militant suffragette, ran out from under the railings and into path of two trailing horses. Anmer, the King’s horse, struck Emily with his chest and pitched onto its head while the jockey, Herbert Jones, was thrown and rendered unconscious. The injuries Davison suffered would lead to her death four days later from a fractured skull. 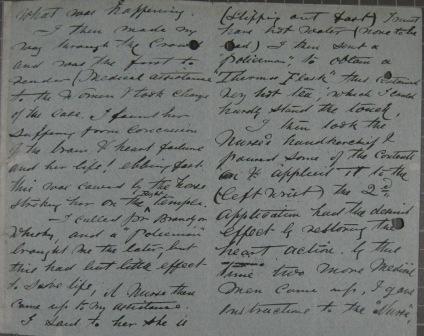 As we have seen in recent television and newspaper coverage, debate has surrounded Davison’s actions since Derby Day 1913 1. Was Emily Davison making a suffrage protest, disrupting the race by attaching a flag in the suffragette colours to the King’s horse? Were her actions part of a wider suffragette demonstration at the Derby or did she act alone? Was she trying to commit suicide? Or, was she simply trying to cross the course in the mistaken belief that all the horses had passed?

Intrigued by all these questions, I decided to take a look at a Metropolitan Police file at The National Archives (MEPO 2/1551) which contains police reports, witness statements and notes made in the hours and days following Davison’s actions.

One of the most vivid statements I found comes from Dr Vale-Jones, a local man, who was attending the Derby as a spectator. He was standing near Tattenham Corner and recounts: ‘A woman opposite me threw her arms up and jumped out into the course just as the last few horses were passing. A space between gave sufficient light to show what was happening.’ Dr Vale-Jones made his way through the crowd to offer medical assistance and his dramatic statement details the medical aid he and a nurse provided before Emily was transferred to Epsom Cottage Hospital:

‘I found her suffering from concussion of the brain and heart failure and her life! ebbing fast… I called for brandy or whisky, and a policeman brought me the latter, but this had but little effect to save life. A nurse then came up to my assistance. I said to her “she is slipping out fast, I must have hot water”.  None to be had I then sent a policeman to obtain a thermos flask that contained very hot tea, which I could hardly stand the touch. I then took the nurse’s handkerchief and poured some of the contents on and applied it to the left wrist. The second application had the desired effect of restoring the heart action.’

While Dr Vale-Jones was treating Emily, jockey Herbert Jones was taken to the ambulance station where he regained consciousness, suffering from bruises, abrasions and shock. Amner, the horse, was stopped on the course and secured. 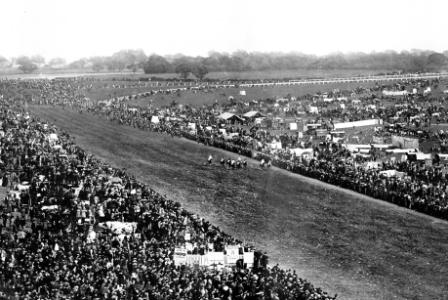 Clippings from contemporary newspaper reports included in the file claim that someone hoisted a placard emblazoned ‘Votes for Women’ just after the accident, implying Emily’s actions were part of a wider protest. Metropolitan Police reports dispute this claim, indeed they indicate that at the time Emily rushed onto the race track, no one knew who she was. Sergeant Frank Bunn and PC Samuel Eady were two of the police officers on the scene and accompanied Davison to hospital. Their statements reveal that Emily’s identity was only discovered when she got to hospital and they found a handkerchief embroidered with her name. Nor was there any sign a demonstration was underway or that Emily might be acting on behalf of the suffragettes until her jacket was removed, revealing two flags. 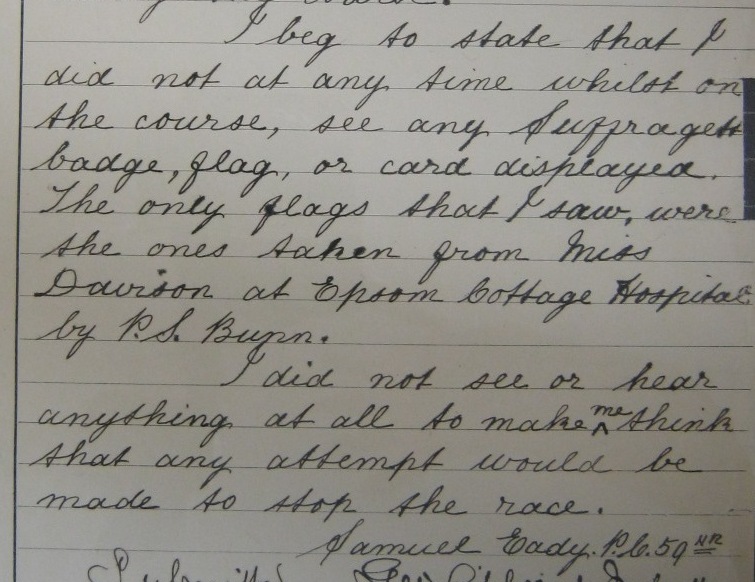 A report by Superintendent Robinson dated 5 June suggests that police officers would have noticed any signs of suffragette activity, having received instructions to keep a sharp look-out following a threat received by the Jockey Club that nails would be placed on the course to disrupt the race. 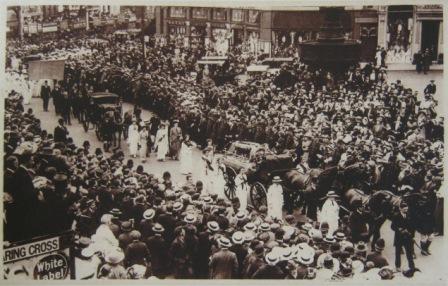 While his statement does not support the suggestion of a larger suffragette protest, Robinson’s report does imply that Emily Davison acted to deliberately disrupt the race, noting that she chose a favourable spot at Tattenham Corner where she could get through the rails and onto the track. Bunn’s discovery of two suffragette flags pinned to Emily’s jacket also indicates that she intended to make some form of protest. On her arrival at hospital, Bunn searched through Emily’s purse, where, among other items, he found a return train ticket to Victoria and a helper’s pass to a suffragette festival that evening. All these different pieces of evidence have only fuelled speculation as to whether Emily really meant to martyr herself when she ran onto the track at Epsom. Perhaps it is in relation to this question that newspaper clippings about the Derby are included in files relating to a suicide attempt Emily made in June 1912, when she threw herself from a staircase in Holloway Prison 2. Disparities between the newspaper reports and witness statements found in MEPO 2/1551 reveal how quickly contradictory stories emerged following this tragic event and might explain why we are still struggling to understand Emily’s intentions 100 years later.

Learning more about the campaign for women’s suffrage

The suffragettes and the struggle for the vote for women in history is a popular topic taught in schools up and down the country at GCSE and A level, as well as forming a part of the present National Curriculum for early secondary school pupils. Here at The National Archives, the Education and Outreach department offers a range of high quality resources and onsite teaching sessions which allow school students to work with original documents on this subject. After all, some of the most interesting documents on this topic are kept here, including the Metropolitan Police file on Emily Davison’s protest at the Derby. 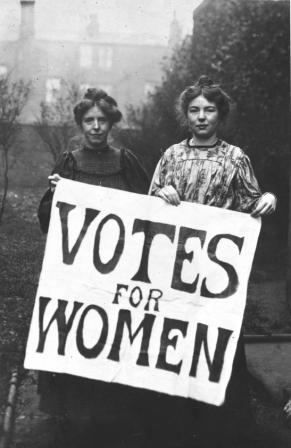 We now offer a new ‘A’ level session called Suffragettes through Government eyes: ‘A little daylight game?’, which examines the Suffragette movement from the perspective of Metropolitan Police and Home Office files held at The National Archives. Students can engage with the ideas of the Suffragettes and assess the impact of militant activities on the cause. If you are unable to visit us at The National Archives, this session will be launched as a videoconference in July 2013. Sign up to our Education Newsletter to find out more!

In addition, we have a selection of free online resources on our education website which use documents from our collections here, including a lesson where students can explore the different tactics used by the suffragettes, police and government. There are documents which reveal information about tactics such window breaking and tax avoidance and the employment of one of the first police motorcycle men employed to capture militant suffragettes in action. Not to forget the role played by veteran suffragette Lillian Lenton, mistress of disguise. There is also another online lesson called What’s the story?, designed to encourage pupils to apply their historical skills to a group of documents in order to find out about an arson attack on the tea pavilion at Kew Gardens. Students can also examine a census return for 1911 where another woman makes a different kind of protest in our lesson called Census Detective and her husband records his views in red ink at the bottom of the census document!

Further resources include Britain: 1906 to 1918, which contains several case studies on the origin of the movement for reform, the activities of the more moderate suffragists as well as the role of the suffragettes.

And finally, a section on the suffragettes in our website on the Growth of Political Rights in the 19th Century includes a police report on the Derby the incident  in 1913 involving Emily Davison along with other related sources.