I’ve previously blogged about a 20th century poetic find in our collection – here’s another I came across recently from the late 18th century, coincidentally ‘echoing’ quite a similar theme…

An interesting email was passed to me a few weeks ago enquiring about searching for evidence of oral culture of those enslaved during the transatlantic trade. I expected to find very little using a simple search, as the preservation of such culture would be rare, at least without in-depth research, particularly amongst the records of the companies and governments involved in the trade for profit. However, a chance try of “slave AND song” in Discovery returned a result which sparked my interest to take a closer look.

The box that arrived is typical of uncatalogued material, bundles of papers housed together with little further information available.

With some very careful handling and the help of a colleague who passed further than “Je suis…” at school, we leafed through the papers. They belonged to one ‘Francois Lavignolle’, listed on Discovery as an administrator on a Haitian plantation, whose papers were intercepted and filed with the High Court of Admiralty paperwork.

There, amongst the accounts papers, was a little folded booklet of songs and rhymes.

The booklet is written by ‘Master Danyian’, presumably a member of literate staff who appears to have recorded songs sung on the plantations. We usually rely on interpreting the official records in different ways to learn about those whose lives were rarely recorded in detail. This is therefore a real diamond in terms of a window into a culture so nearly lost.

My colleague, James Cronan, has translated one of my favourite songs from the booklet. According to its title, it is a subject that ‘echoes’ or returns again and again through time – see what you think!: 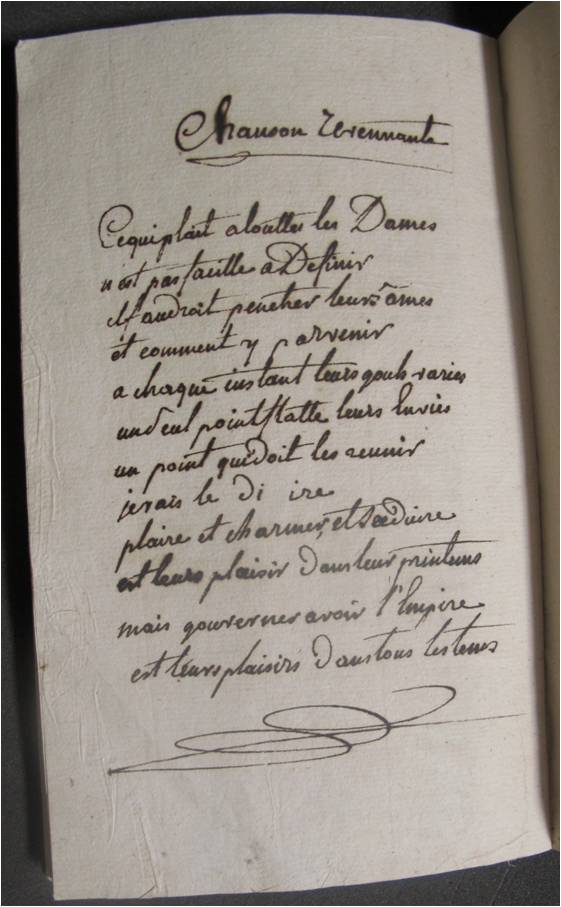 What pleases all women

Is not easy to define

You would need to penetrate their soul

But that is hard to reach

At every instance their tastes change

One single point flattens their desires

A point which ought to unite them

I’ll tell you what it is, to please, to charm and to seduce

Is their pleasure in their spring

But to govern and have control

Is their pleasure all the time.