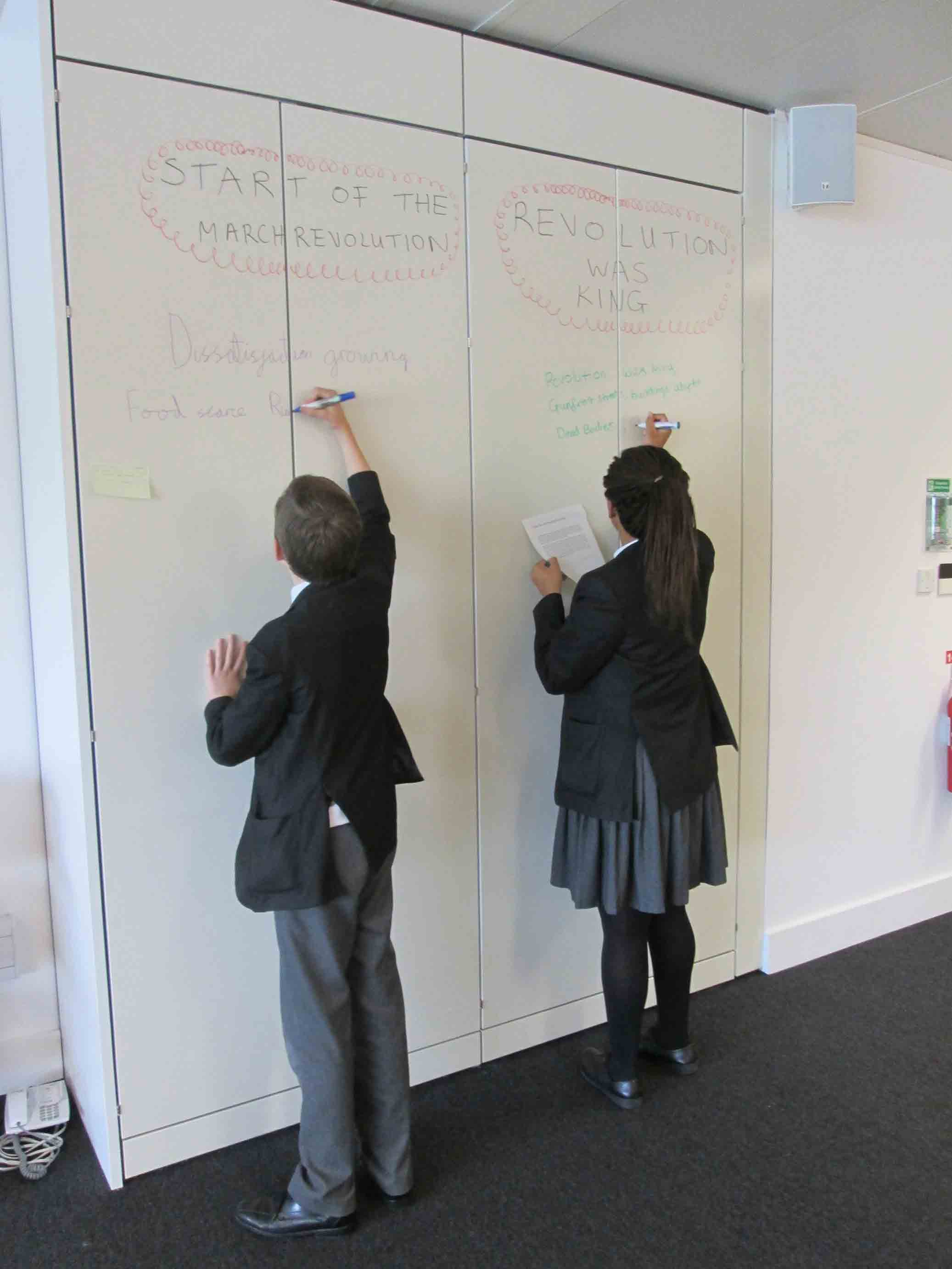 ‘Revolution!’ It is 1917, and revolution stirs in Petrograd. Actually, it is a balmy Friday afternoon in September 2014 and we are in leafy Kew, where cries of students are sounding out through the corridors here at The National Archives. We are observing some of the events of Russia’s February revolution, as imagined by a group of drama and art students of The Wren Academy, from Barnet in north London, who have just participated in an education-led workshop.

The students, aged between 14 and 16, have never visited an archive before, and today their visit is a little different from that of most school groups passing through our doors. Firstly, they are not here as part of their history curriculum. They have come to learn about the Russian revolution and its context within the First World War. They are also exploring the motivations and actions of a British armoured car squadron, stationed in Petrograd to assist the Tsarist government, and especially those of Commander Oliver Locker-Lampson, its enigmatic and rather swashbuckling leader! The students’ workshop today will help inspire artwork and a piece of theatre which will be showcased at the Victoria and Albert museum (V&A), later this year.

This is a new outreach project, supported by the Friends of The National Archives and developed in conjunction with the V&A’s learning department and with students and teachers of Wren Academy. Part of our role in outreach is to use our collections imaginatively to inspire new audiences. A creative approach, working with artists and performers, allows us to engage groups from all walks of life, bringing new perspectives and interpretations on the histories we hold.

This project is inspired by a fascinating report that Commander Locker-Lampson wrote hurriedly to the Admiralty on 19 March 1917, held in one of our Foreign Office files (FO 371/2996). It is a description of events at the military Hotel Astoria in Petrograd. ‘Many were killed in the hall, and thoroughly roused, the revolutionaries mounted the stairs, the soldiers asking for revenge, the mob scenting loot in the carpeted corridors and luxurious flats of the hotel.’ During the course of that evening, the squadron rescue two women in fear of their lives, one of whom, Princess Eugenia Tumanishvili, has been shot in the neck.

These narrated events alone are exciting enough for dramatization, but there is a development of further interest beyond one historical account. Eugenia, aged about 18 at the time of rescue, later marries and flees Russia for Shanghai, giving birth on a train in Siberia. Her baby daughter, Tamara Toumanova, becomes at the age of 13 one of the ‘baby ballerinas’ or the ‘Black Pearl’ of the Ballets Russes. She enjoyed a career of well over 30 years after settling in the United States and being discovered by choreographer George Balanchine. Tamara danced in a number of films, including Alfred Hitchcock’s Torn curtain and with Gene Kelly in Invitation to the dance. After her death in 1996, she was buried in Los Angeles’ Hollywood Forever cemetery, alongside her mother. 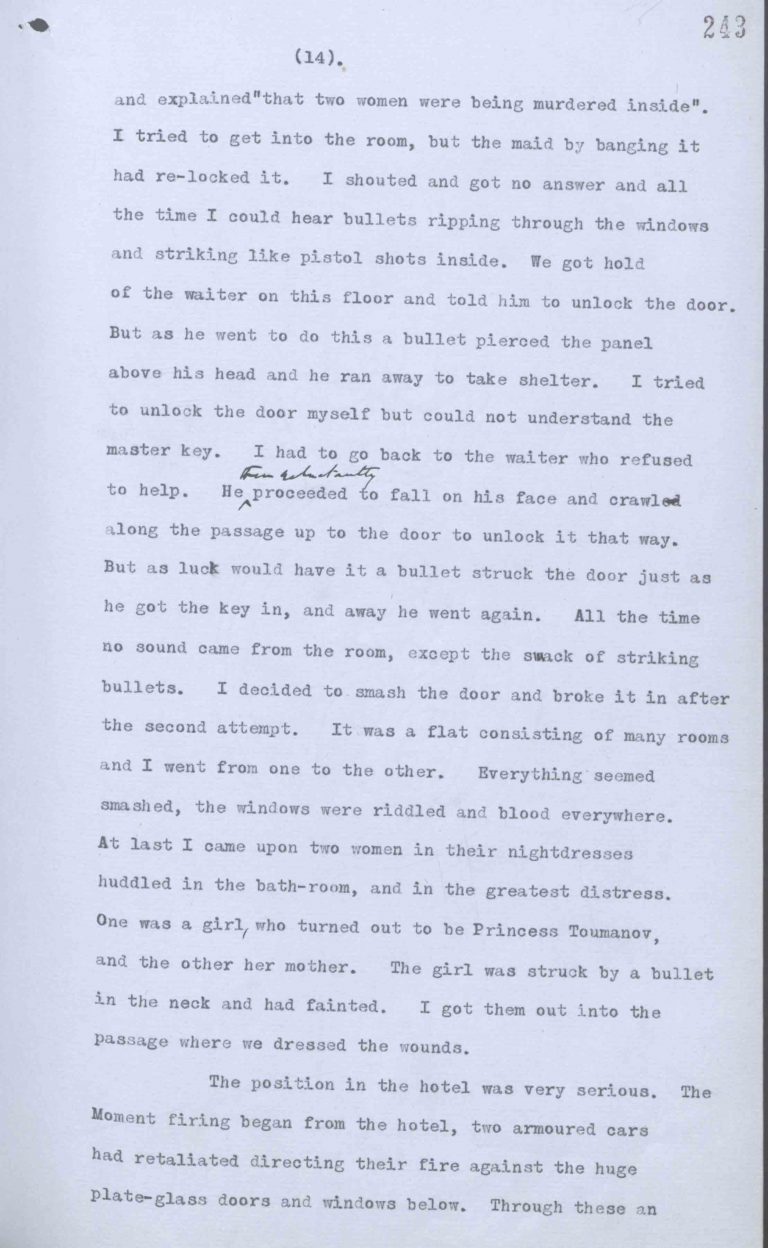 To return to our project, Locker-Lampson’s one historical account, surprising in the unusual informality of its language, has provided an important and exciting insight into the wide theatre of the First World War and some of the causes of the Russian revolution. It has fuelled the imaginations and creativity of a talented and enquiring group of young people, intrigued by the mysterious Rasputin, inspired by the deeds of the Armoured Car Squadron and the warrior-like Locker-Lampson. From this report at least, this squadron seems to embody ideals of courage, gallantry and leadership.

From here, the students are taking their research forward and, with the leadership of teachers from the Wren Academy, they are building their ideas into art and performance. This work will complement the V&A’s exhibition Russian avant-garde theatre: war, revolution and design 1913 – 1933. If you are interested in learning more about Tamara Toumanova, the V&A also holds a large collection of material relating to the ‘Ballet Russes’.

If you’d like to know more about this project, or other outreach projects that we run, email us at outreach@nationalarchives.gov.uk or write to us in the comments section below.