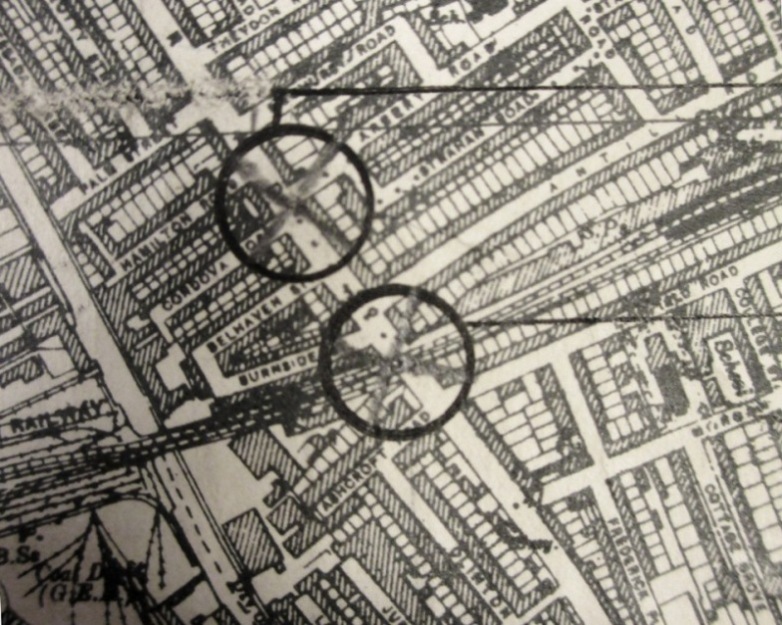 The bombing of British towns and cities during the Second World War was far from uniform. The intensity of the raids, the places targeted and the types of bombs that were used all varied considerably.

One of the most significant changes in the pattern of bombing occurred 70 years ago today, on Tuesday 13 June 1944. In the early hours of the morning, the southeast of England experienced its first V1 raid. This was to be the first of many.

V1 is an abbreviation for the official German name for these devices: Vergeltungswaffe 1 (meaning ‘retaliation weapon 1’). In the British government’s records of the time, the usual term is ‘flying bomb’. Unofficial nicknames included ‘fly’ and ‘doodlebug. 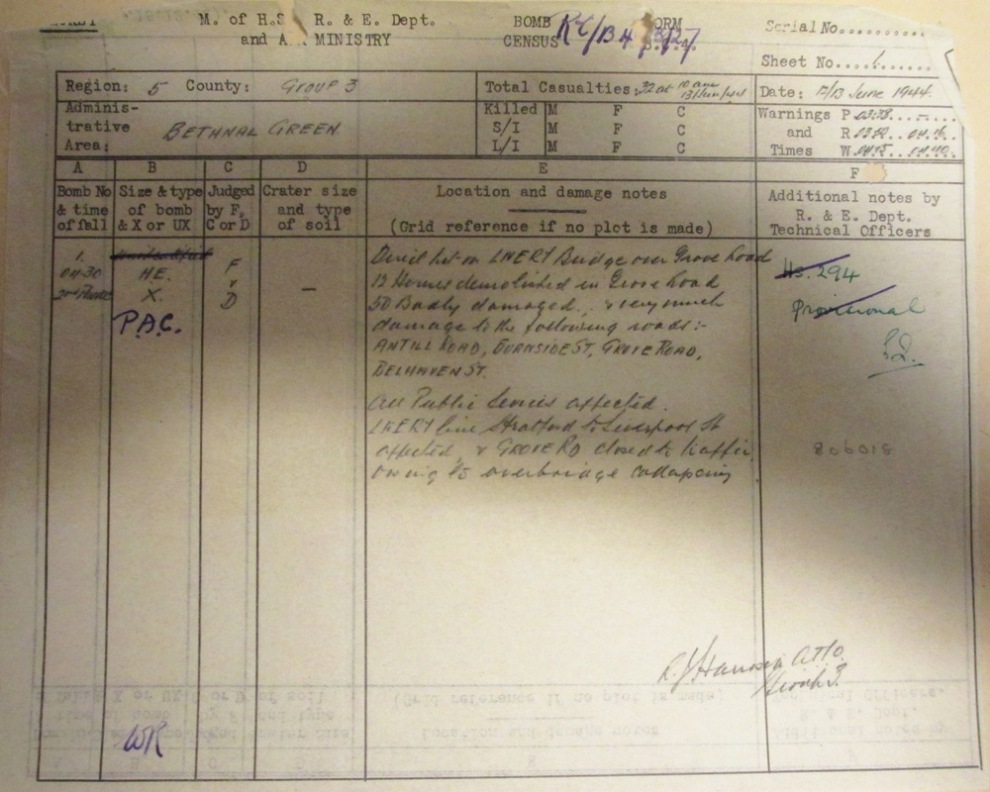 The ‘BC4’ form used by the Ministry of Home Security to record the Grove Road incident. Click on the image to enlarge it. Catalogue reference: HO 198/78, Bethnal Green 12/13 June 1944.

In British records of 13 June, and for the next few days, V1s are referred to as ‘pilotless aircraft’ (or ‘P.A.C.’s). 1 This reflects the fact that – unlike those used in earlier air raids – these bombs were not designed to be dropped from aircraft with human pilots. Instead, they could be launched from mainland Europe, without risking deaths or injuries to members of the German Luftwaffe.

The Ministry of Home Security recorded the fall of four V1s during this first raid. 2 Three of these (in Kent and Sussex) had a relatively slight impact. The fourth, however, struck a railway bridge over Grove Road, in Bethnal Green, to the east of central London, causing terrible damage. At least six people were killed and many others injured. 3

The Grove Road bombing was immediately recognised as a new kind of air raid and this fact was highlighted in the reports that were prepared for government ministers and senior officials. 4

Anxious to learn whatever it could about the effects of the V1s, the Ministry of Home Security investigated this incident far more fully than most bombings. The images below come from a file about the findings of this investigation. 5

Air-raid damage files like this one are usually illustrated with diagrams, maps and photographs. This plan shows the damage caused to the bridge itself.

A report describes the London and North Eastern Railway Company’s approach to restoring the damage that had been caused to its bridge. This railway line was an important transport link. 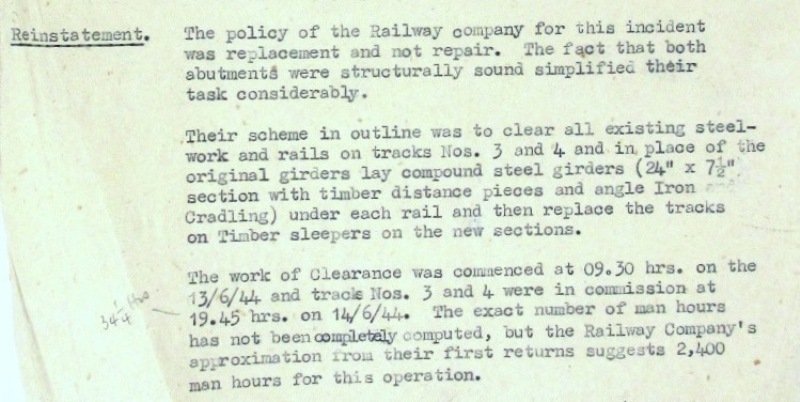 Much of the file consists of typewritten text that outlines the effects of the bomb and the clearance work required in great detail. Catalogue reference: HO 192/492, briefing no 1563, p 2.

This is one of more than 60 photographs illustrating the effects of the bomb on the bridge and the surrounding buildings. 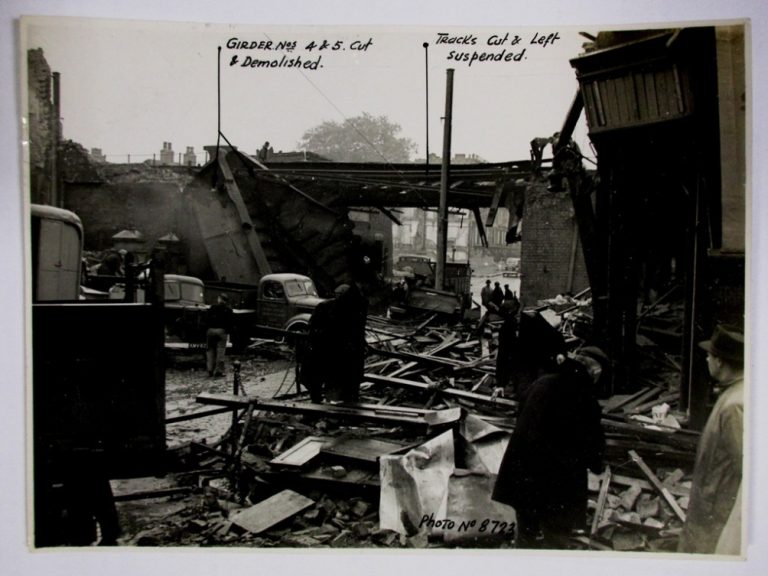 Points of particular interest to the Ministry of Home Security are labelled on this photograph. Catalogue reference: HO 192/492, photograph numbered 8723 in envelope at the back.

The colouring on this street map records the impact of the blast and debris on nearby buildings. Red indicates the most damaged and green the least. The numbered arrows refer to the angles from which photographs were taken.

This street map was specially copied before being annotated and coloured in by hand. Catalogue reference: HO 192/492, map in envelope at the back.

The file also includes some eyewitness accounts. This one mentions the difference in sound between the doodlebug and the types of bombs used during the Blitz of 1940-1941.

The use of V1s – supplemented from September 1944 onwards by V2s (also known as long-range rockets) – continued until March 1945, but they did not ultimately have the effect that the Germans had hoped. Even before the first deployment of the V weapons, Germany had already begun to lose the war. 6

Air raids during the Second World War are not always an easy or straightforward topic to research. Please see an earlier post on our blog for some guidance on where to start. 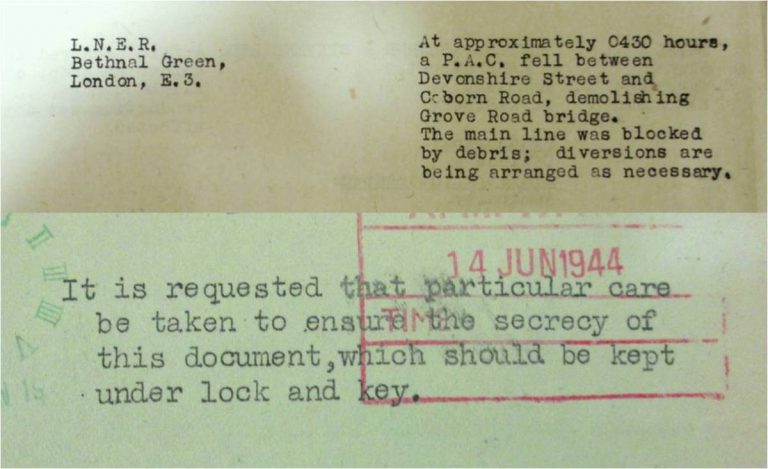