Documenting LGBT history across the UK

We’re now well into LGBT history month, celebrated by The National Archives and many other heritage organisations and communities across the country. It seems like a good moment to reflect on how LGBT archives appear in the historical record, without which LGBT history month couldn’t exist.

Older records can be really problematic for studying LGBT history, and seem almost to conspire to hide histories rather than to reveal. Where a community was of necessity trying to avoid the eye of the authorities, there’s relatively little in the official records, and when it does exist, it’s often a negative portrayal. Jenni’s blog earlier in the month outlined what The National Archives is trying to do about that, revealing hidden histories and bringing together information on LGBT records so that it is easier to find. 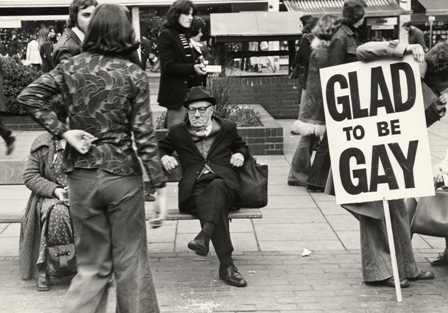 We are not alone in aiming to improve the representation of LGBT communities in heritage, of course, as the 10th annual LGBT History, Archives and Culture Conference showed this past Saturday. Outside the government record, more positive portrayals of LGBT life can readily be found – but  the community is often under-represented in their local archive contexts. Groups that have had every reason to feel outside the mainstream have understandably often shied away from depositing their records with formal archives like those run by local authorities. That is changing, and for the first time we are hoping that in 2012 our annual survey of archive collecting – Accessions to Repositories – will show enough LGBT material coming into publicly accessible UK archives that we can create a themed LGBT history digest to assist future researchers. It’s early days for this year’s survey, but we’ve already seen important acquisitions like the records of Herefordshire and Worcestershire Lesbian and Gay Switchboard arriving at Worcestershire Archives and Archaeology, and papers relating to the Pride in Our Past project adding to the Plymouth LGBT Archive at Plymouth and West Devon Record Office.

There are also hugely important dedicated LGBT archives: including the Hall Carpenter, maintained in partnership with LSE; the Lesbian and Gay Newsmedia Archive at Bishopsgate Institute; and the Lesbian Archive at Glasgow Women’s Library. Many other LGBT groups continue to maintain and where possible offer research access to their own records. These dedicated, community-owned archives preserve much that would otherwise have already been lost.

One factor that hinders preserving LGBT history for the future is that classic institutional archives – committee minutes, accounts, official publications – don’t give a rich picture of people’s experiences and personal histories. The Voluntary Action History Society rightly say in their own blog for this month that much of what makes the LGBT community into a community comes from voluntary action, instead of official structures. That doesn’t necessarily lead to a lot of traditional paperwork. The records that are most readily collected may tell us the least, especially about capturing the experience of daily life which is the essence of community history. Oral history has therefore been a crucial part of developing LGBT history resources. Projects like Mapping My Journey, which is a Heritage Lottery funded project to collect memories of the trans community, are a key way of documenting such otherwise silent experiences, and letting authentic voices speak to history.

There’s no perfect single answer to documenting the lives of complex, diverse cultural communities, of course. But it’s good to see more and more archives are doing their bit to uncover hidden histories with LGBT source guides – like these at Surrey Heritage, London Metropolitan Archives, Manchester Archives and Lancashire Archives. Glamorgan Archives has also created a YouTube video where their head of service Susan Edwards explains the importance of LGBT History Month Cymru to the archives. I hope this time next year there will be much more to report from archive services around the country.