Set cookie preferences
Home > Blog > Do you take this man…and his nationality?

Do you take this man…and his nationality?

Before the First World War moving between countries could be a surprisingly casual affair. There were such things as passports, but they were not compulsory, and even for those people who held one, the surviving records are disappointingly sparse. We receive lots of enquiries from people whose ancestors migrated into or out of the United Kingdom, and we often have to disappoint them because there is no record of their arrival or departure.

Some people who came and settled here went to the trouble and expense of becoming naturalised, and we have some very good records for them. Unfortunately many others did not, because they had no good reason to do so, and there was no barrier to their staying and settling without being naturalised in this period. When the subject of nationality came up in the census, some people claimed they were naturalised, but we have no record that they were. The likely explanation is that many simply misunderstood the question, but there is no way of knowing for certain. Interestingly, in the 1911 census most seem to have told the truth, because this year there was an extra question; they were asked for the year in which they became naturalised. This made it clear that there must be some kind of official process, and a request for such specific information introduces the subtle suggestion that someone might actually check.

The whole question of nationality and citizenship is unlikely to have been uppermost in the minds of very many people at all, whether they were born here or not. But then the British Nationality and Status of Aliens Act, 1914 will have forced some of them to sit up and take notice, particularly in the light of war with Germany and her allies. For a long time there had been close ties between Britain and Germany, and many Germans had settled here. They now found themselves in a very uncomfortable position, including those with German-sounding names, even if their families had been settled here for generations. It is well-known that the Royal Family chose to change their name from Saxe-Coburg to the more patriotic-sounding Windsor at this time.

The act set out in detail who was British and who was not, so someone who came from Germany but was not naturalised might now risk being interned as an enemy alien. Aliens could still apply for naturalisation, but they had to fulfil a number of conditions, and there was no guarantee of success, since the act contained the ominous sentence ‘The grant of a certificate of naturalisation to any such alien shall be at the absolute discretion of the Secretary of State, and he may, with or without assigning a reason, give or withhold the certificate as he thinks most conducive to the public good, and no appeal shall lie from his decision’

Another group affected by this act consisted of women who been married to foreign men, but were now widowed or divorced. They had acquired their husband’s nationality on marriage, and retained even after the marriage ended. I came across an example of this while I was filling in the gaps in a friend’s family tree. Mary Jane Freimuller, a widow, and her daughters were living with her sister and brother-in-law at the time of the 1911 census, and they are all listed as ‘British subject’. When the British Nationality and Status of Aliens Act came into force, she will have discovered that her nationality was actually German, although her daughters were British. She married a German sailor, Leonard Freimuller, in 1894, but they had only been married for 5 years when he died. 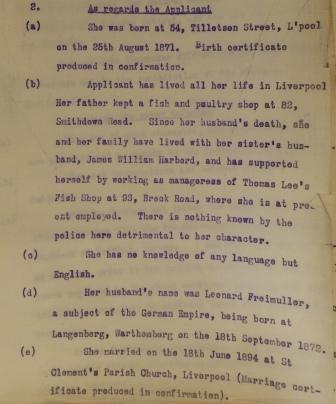 Like many other women in her position, she had to apply for naturalisation to reclaim her status as a British national, and not an alien. Her file contains just the same kind of detail that you would find in any other application, including statements from people who knew her well, attesting to her good character, and details of her life and background. It even includes the name of the fried fish shop of which she was manageress at the time of her application in 1915.

The whole process seems to have gone smoothly in this case, and took only a few weeks, but the act made it clear that while there was likely to be no barrier in cases such as this, it was not automatic, and widows and divorced women whose husbands had been foreigners still had to apply for re-admission to British nationality. When her application was approved it was also noted that her two daughters were British subjects, under the terms of the act. The file also includes a note that she had paid the fee of 5 shillings by postal order.

You can find a number of similar cases by using the Advanced Search in Discovery using the exact phrase ‘re-admission’ and including keywords like Germany or Austria, restricting the search to series HO 144. Many of results are for women, and many of them have British-sounding forenames with German surnames. Some are also known by another surname, which may turn out to be either her maiden name, or an anglicised version of the German surname.

Neither Mary Jane nor her two daughters seem to have felt the need to change their surname at that time, although all three of them eventually married and acquired British surnames that way. Mary Jane herself was the first to do so in 1921, when she married Edward James Hughes, the lodger who lived in the same house in 1911.

Incidental details about people’s lives, such as those I found in this file are always very welcome to family historians, but best of all was something I had never expected to discover. It included the date and exact place of birth of Leonard Freimuller – 18 September 1872 in Langenberg, Warthenberg. Since he had not become naturalised himself, and never appeared in a British census I thought his origins would remain a mystery. I was wrong.

I would like to thank my fellow Family History Specialist, Mark Pearsall, for his patience in dealing with my incessant questions about nationality and citizenship.