‘Dividing the bear’s skin while the bear is still alive’

100 years ago, on 16 May 1916, Britain and France signed a secret agreement carving up the Ottoman Empire. Named after its creators, Mark Sykes (MP for Hull Central and attached to the Directorate of Military Operations) and François Georges-Picot (a French diplomat), the Sykes-Picot Agreement was never popular; it is still perceived today as a tangible manifestation of Anglo-French imperialist perfidy and the source of all troubles in the Middle East.

Anticipating the defeat of the Ottoman Empire, and anxious to secure their foothold in the region, Britain and France started negotiating in 1915 to divide it up between themselves, ‘on the hypothesis that France and Britain [were] desirous of assisting in the creation of an Arab State or Confederation of Arab States.’

The first meeting, held on 23 November to ‘examine French and British desiderata in the Asiatic dominions of Turkey’ (CAB 42/11/9), wasn’t overwhelmingly positive. Picot, it seems, wasn’t very popular; ‘M. Picot is well known as being very extreme in his ideas,’ Clayton, the Director of British Military Intelligence in Cairo, wrote a few weeks after the meeting, ‘and completely saturated with the vision of a great French possession in the Eastern Mediterranean’ (FO 141/734/1). 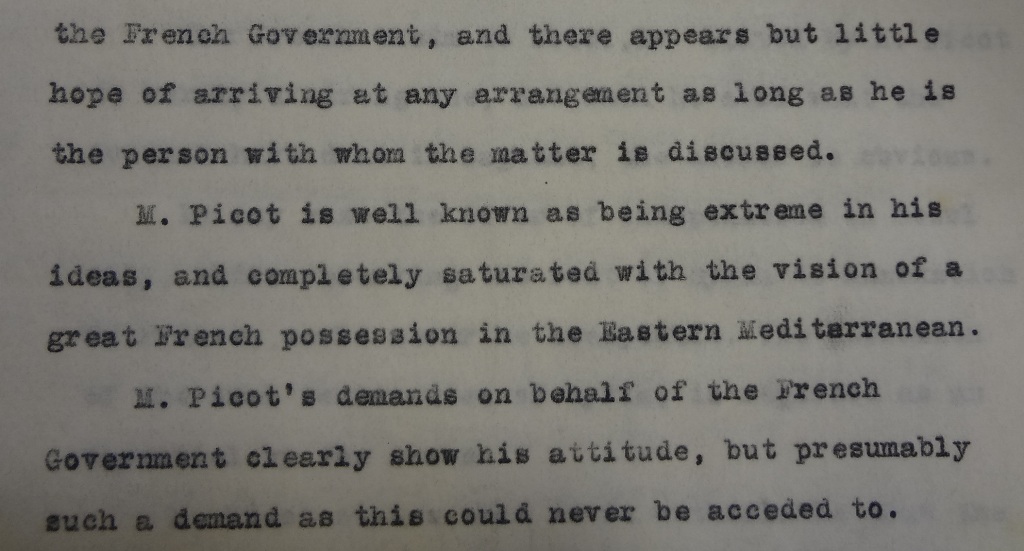 Picot was admittedly rather uncompromising. Informed of ongoing negotiations between the High Commissioner in Egypt and the Sharif of Mecca about Arab nationalist aspirations, the French diplomat explained that France would ‘never consent to offer independence to the Arabs’, that Syria was ‘very near the heart of the French’ and that he had very little faith in the Arab nationalist movement Britain was trying to trigger. He also demanded the whole of Syria and Palestine for France. The negotiations, unsurprisingly, reached a deadlock at this point and Picot went back to Paris to lay the matter before his government.

As Anglo-French rivalry is never very far, Clayton brought Fashoda back into the picture. He dismissed Picot as ‘one of the Anglophobe school of 1898’ (FO 882/12) and his arguments as ‘sentimental trash’ (FO 882/2).

A second meeting was held on 21 December 1915. Picot arrived in London with scaled-down French demands. The British, however, suddenly announced they wanted the future Arab State to encompass Lebanon. Once again, the meeting broke up with no agreement. Sykes and Picot then met privately to discuss unresolved issues. Clayton thought it was ‘hopeless to attempt to arrive at any reasonable agreement with the French so long as Picot [was] their representative’ (FO 882/2), but a deal was finally reached on 3 February 1916 (CAB 42/11/9).

The finalisation of the agreement was ‘contingent on the consent of Russia’, who had interests in the region, and on the cooperation of the Arabs, who had to implement the revolt they were promising. Sykes and Picot therefore proceeded to Petrograd to share the draft with the Foreign Minister, Sazonov. Russia having agreed (for a price, as it obtained large portions of Ottoman territory in the bargain, including Constantinople and the Straits) on 26 April 1916 (FO 371/2768), the final terms were sent by Paul Cambon, the French Ambassador in London, to the Secretary of State for Foreign Affairs, Edward Grey, on 9 May 1916, and ratified in Grey’s reply on 16 May 1916 (FO 371/2777). 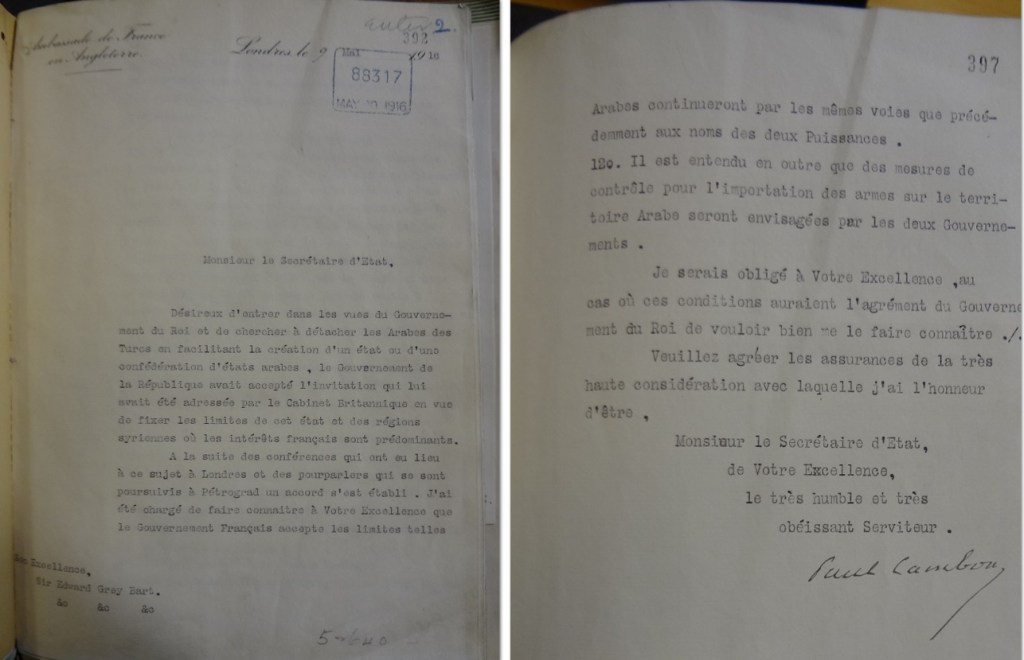 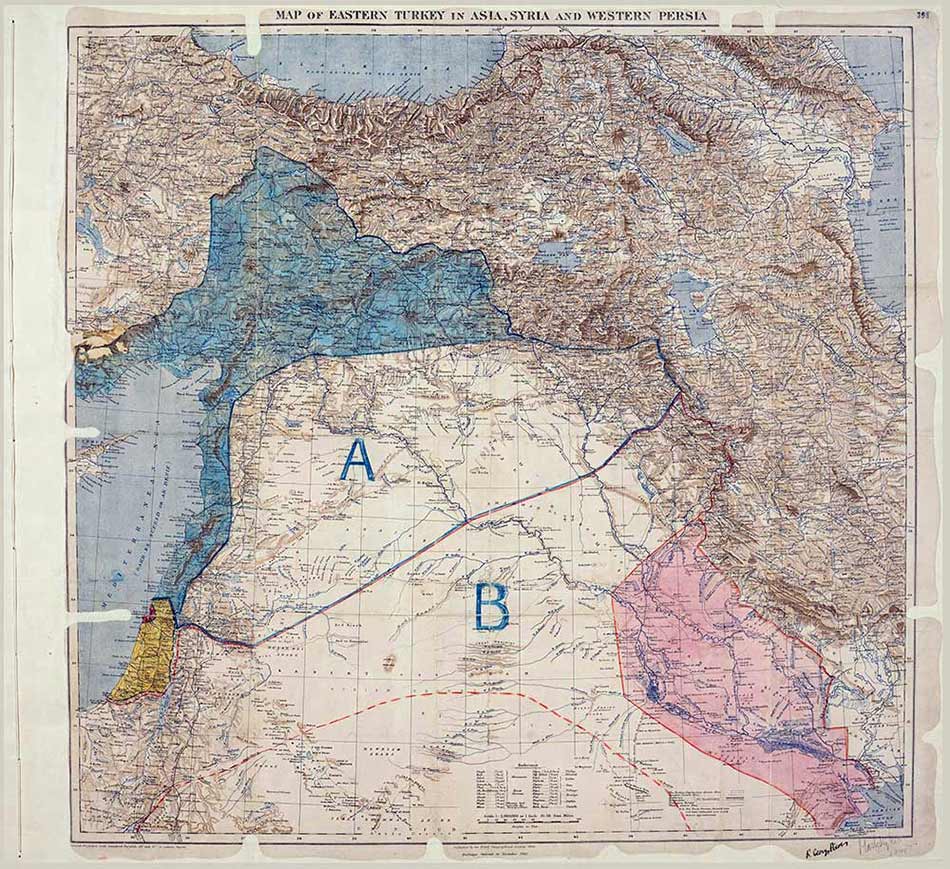 The agreement was to remain secret. The High Commissioner in Egypt wrote to the Foreign Office that while he felt confident noting in the agreement clashed with the promises made to Sharif Hussein to create an independent Arab State, he thought that ‘the moment [had] not yet arrived when we [could] safely [divulge the details of that arrangement] without some risk of misinterpretation by Arabs’ (FO 141/734/1). Hussein was eventually briefed in the spring of 1917 (FO 882/16), along with the Italians, who promptly demanded (and obtained) Western Anatolia (FO 93/48/60). So when the Bolsheviks, who had just deposed Tsar Nicholas II, found a copy of the agreement in the archives and leaked it to the press, it was probably not the massive shock they had hoped for.

Although the French government considered the Sykes-Picot Agreement as ‘definitive’ and ‘final’ (CAB 17/176), the British had second thoughts very early on. Before it was even concluded, on 3 May 1916, Hogarth, the Head of the Arab Bureau, wrote: ‘I hope (…) this agreement is regarded by our Government as a purely opportunist measure with the mental reservation that it cannot but need considerable revision sooner or later’ (FO 882/14).

In Cairo, Clayton agreed; he thought the agreement may be a ‘useful guide’ but noted that the situation in the Middle East was very unstable and that ‘anything more than an informal and general understanding would be dangerous’ (FO 371/2774).

Similarly, Hall, the Director of Naval Intelligence, thought that it was rather like ‘dividing the bear’s skin while the bear is still alive’ (CAB 42/11/9).

In April 1917, the War Cabinet suggested that the Agreement should be modified so as to give Britain ‘definite and exclusive control over Palestine’ (CAB 23/2/44).

On 3 October 1918, the minutes of the War Cabinet recorded that:

‘the Prime Minister said he had been refreshing his memory about the Sykes Picot Agreement and had come to the conclusion that it was quite inapplicable to the present circumstances and was altogether a most undesirable agreement from a British point of view. Having been concluded more than 2 years ago, it entirely overlooked the fact that our position in Turkey had been won by very large British forces, whereas our Allies had contributed but little to the result’ (CAB 23/14/35).

The Agreement, drawing lines in the sand of the not quite moribund sick man of Europe, is largely perceived today as the source of all Middle Eastern dissent. 100 years on, it is probably time to move beyond the popular myth of Sykes-Picot, that no-so-secret agreement which did not shape the modern Middle East. The French did try to make it the basis of the Peace negotiations (CAB 23/12/7), but Sykes-Picot was never implemented. Let’s remember that it wasn’t an internationally binding treaty, but only an agreement which was deemed suitable at the time. Mark Sykes and François Georges-Picot did not determine borders in the regions, merely zones of influence; the borders themselves were fixed by the 1920 Treaty of Sèvres and the 1923 Treaty of Lausanne. They were quite different from what the Agreement had suggested – Mosul ended up in the British sphere of influence, Palestine became a British Mandate, Italy didn’t get Anatolia, Russia (who had withdrawn after the revolution) didn’t get Constantinople, Turkey was much larger than it had been intended, and the Confederation of Arab States never materialised.

So, a century on and as the Middle East is in turmoil, let’s make sure we don’t blame it on Sykes-Picot. A piece of old-fashioned wartime diplomacy, Sykes-Picot was, as Hogarth put it, ‘a purely opportunist measure’.