Distress in the cotton districts 1863 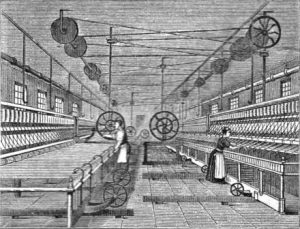 Spinning mules from Chambers’ ‘Information for the People’ 1856

A century and a half ago, the American Civil War was well under way, and its devastating consequences for that country are well-known. But the conflict had serious repercussions on this side of the Atlantic, too. The cotton industry in north west England was dependent on supplies of raw cotton from the southern states, and when this supply was interrupted there was real hardship in some places.

This led to the fear of civil disturbances in some towns, including Hyde in Cheshire, where the authorities were sufficiently concerned to swear in a number of special constables to keep the peace. This document (Ref HO 45/7523) comes from the treasure trove that is Home Office Registered Papers 1839-1979, series containing more than 26,000 boxes and files.

I Joseph Little of Hyde in the County of Cheshire, Deputy chief constable, upon my oath, do say that I have reasonable grounds for apprehending and do apprehend that there will be this day a tumult and riot in Hyde aforesaid; and upon my oath aforesaid I further say that great numbers of people are tumultuously assembled in the public streets of Hyde and at other places and have done much damage to private property and have endeavoured to induce the rest of the inhabitants to join in the tumult by intimidation and violent means that I apprehend such offences will continue to be repeated and that the inhabitants of Hyde and neighbourhood labour under grat fear on that account; that the ordinary constables appointed for preserving the peace in Hyde aforesaid and in Godley, Newton, Werneth and Matley Townships wityhin the division of Hyde in the said County are not sufficient of efficient in number for the detection and discovery of the offender or offenders, for the preservation of the peace or for the protection of the inhabitantsand the security of the property in Hyde aforesaid.

Sworn before us four of Her Majesty’s Justices of the Peace for the said County of Chester acting in and for the division of Hyde aforesaid this twenty third day of March 1863. Joseph Little

The document goes on to give the names of the special constables that were sworn in. In some cases it has been possible to identify the individuals in the 1861 census, so I have added their occupations where I am reasonably certain I have identified the right man. I hasten to point out that this is not the result of lengthy and painstaking research, and falls well short of the Genealogical Proof Standard! I thought it was worth doing, however, just to illustrate the possibilities for building up a picture of a community from a variety of sources. 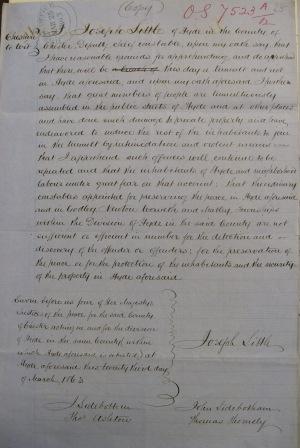