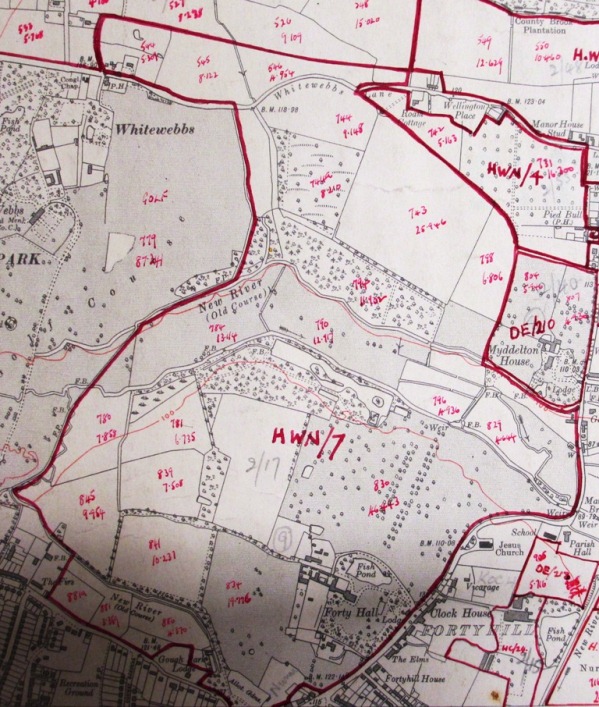 One of my new year’s resolutions is to research a few topics that I have wanted to investigate for a while but haven’t got round to exploring before. Today’s blog post is a step towards that goal.

Many months ago, I ended a post about a house called Forty Hall by saying that I hoped to write more about the property and some of the people who had lived there. Knowing that the site includes a farm, I decided to see what I could learn from the records of the National Farm Survey of 1941-1943.

During the Second World War, food supplies from overseas were inevitably very limited. Farming and food production within the UK took on a renewed importance. Government information campaigns encouraging the public to make practical contributions to boosting food supplies used slogans such as ‘Dig for Victory’.

It was in this context that the National Farm Survey was carried out. The survey collected detailed data about the use of land in England and Wales for agriculture and animal husbandry. It covered all farms and market gardens larger than five acres (just over two hectares), a total of about 300,000 agricultural properties.

The information from the survey was originally used to plan for food production once the war had ended. From the outset, it was also intended to be preserved permanently as a public record, comparable in scope to the famous Domesday Book. Today, the records remain a useful and interesting source for researching the people, places and landscape of mid 20th-century England and Wales. 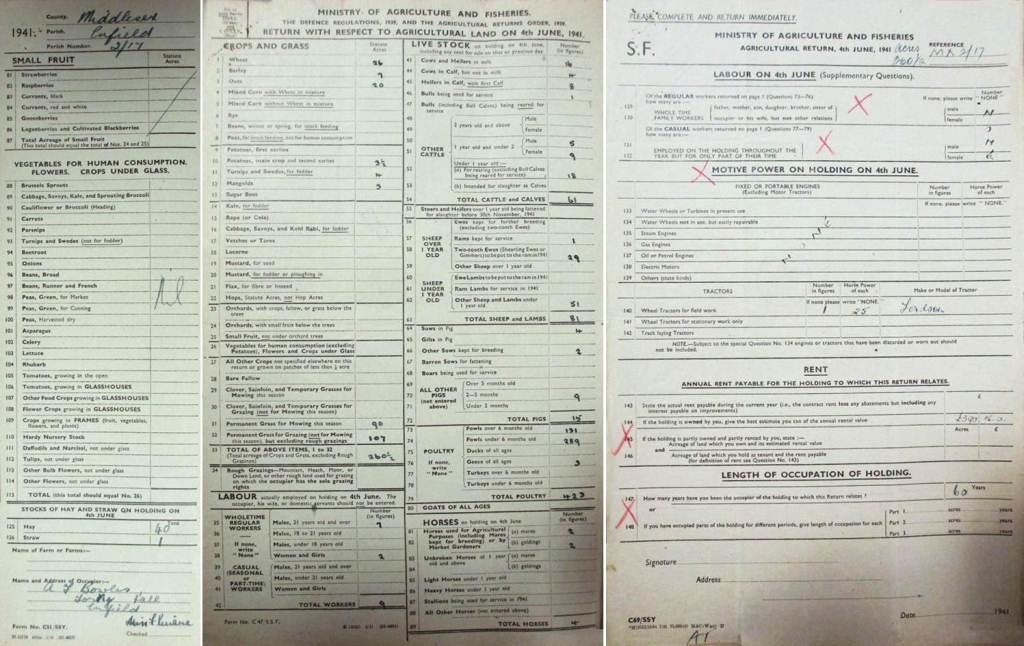 The bundles of forms normally contain four separate forms for each farm. Three of them are ‘census’ forms completed by the farmer in June 1941. The fourth, called the primary farm record, was completed later by an inspector who visited the farm.

Each farm was assigned a number. This was marked on the relevant part of the map and on each of the forms to serve as a cross-reference between related records. 1

Searching for the records

The simplest way to find the catalogue reference for a portfolio of National Farm Survey maps is to look at the dedicated index map, which is available in our Map and Large Document Reading Room. This shows not just the relevant Ordnance Survey map sheet numbers but enough information to construct the full catalogue reference. These references begin with MAF 73, followed by a county number and then a portfolio number.

My example, Forty Hall, is in Enfield in the historic county of Middlesex. The index showed me that the portfolio number for the maps covering the relevant part of Enfield is 2. The county number for Middlesex, which is marked in the bottom right-hand corner of the index map, is 27. My catalogue reference was therefore MAF 73/27/2. 2

Finding the catalogue reference for the forms is simpler because the records are grouped together into civil parishes and listed in Discovery, our catalogue, by parish name. A quick search for “maf 32” AND enfield found me the reference MAF 32/952/2. The number 2 at the end of the reference reflects the fact Enfield was numbered as parish 2 within Middlesex. 3

The number 2/17 is marked quite faintly. Many National Farm Survey maps are clearer and easier to read than this example.

Looking at the records

When my portfolio of maps arrived in the reading room, I quickly found the Forty Hall estate, which is shown on sheet Middlesex II SE. National Farm Survey maps do not all look the same and sometimes the farm numbers are not marked very clearly. On this map, I spotted the number that I needed marked in pencil as 2/17. 4 The 2 is the parish number and 17 is the farm number.

The four forms relating to each farm are not filed next to one another. Instead, each bundle of forms contains four sequences in numerical order, one for each type of form. I looked through the sequences for Enfield to find the forms numbered 17, carefully keeping the loose papers in the right order.

My (rather stereotyped) mental image of a wartime farm was one of land girls ploughing up the pasture to grow vegetables. I was interested to learn that Forty Hall Farm had been quite different from this picture.

The livestock listed include 420 fowls and three geese.

Only two of the farm’s nine workers were women. The workers had four horses to help with the labour and one tractor.

The land was not naturally good for farming – a quarter of it was considered to be of poor quality – but there were no infestations of pests. The state of the buildings, roads, fences and ditches was good. The arable land was fairly well kept and adequately fertilised but the pasture was in poor condition. 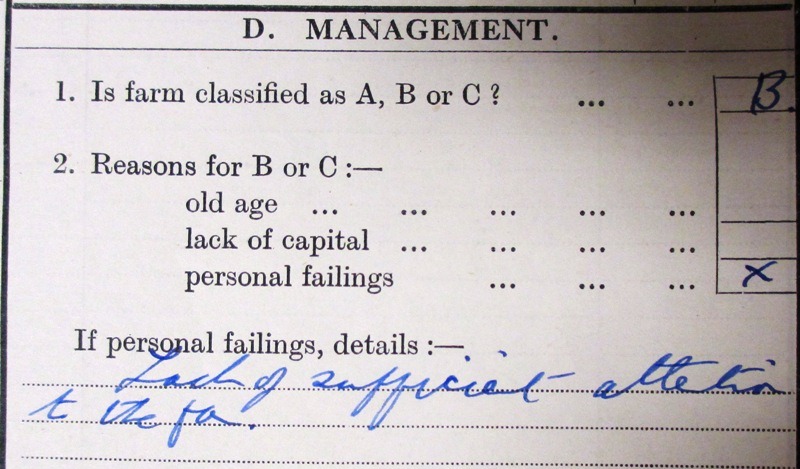 Mr Parker Bowles was awarded a B grade.

The three census forms were addressed to Sir H F Bowles. I already knew that this was Sir Henry Ferryman Bowles, the then owner of Forty Hall. However, the primary farm record, dated July 1942 by the visiting inspector, gives the farmer’s name as Mr Derek Parker Bowles, Sir Henry’s grandson.

A rather controversial aspect of the survey was that the visiting inspector graded the farmer according to how well he or she was managing the farm. Mr Parker Bowles was graded B (meaning adequate). He did not merit the top grade of A because of ‘lack of sufficient attention to the farm’.

There is space on the primary farm record to note any other occupation of a farmer who did not treat managing the farm as a full-time job. I was struck by the fact that Mr Parker Bowles worked at the Ministry of Information, which was responsible for promoting the Dig for Victory campaign. Evidently he had not been practising what his employer preached. Perhaps he felt that his contribution to the war effort was made more effectively in the office than in the farmyard.