Around this time 100 years ago, Military Service Tribunals across the country were beginning to hear applications and appeals from those seeking exemption from compulsory military service in the army.

At The National Archives, we are fortunate to hold the papers of the Middlesex County Appeal Tribunal, one of the two tribunal record sets officially retained by the Government after the end of hostilities.

Having worked on our project to make our collection of case papers available online for free, I am intrigued by how the Tribunals worked, and the very difficult, sensitive cases brought before them. One question that stands out is, how fair were the Tribunals? 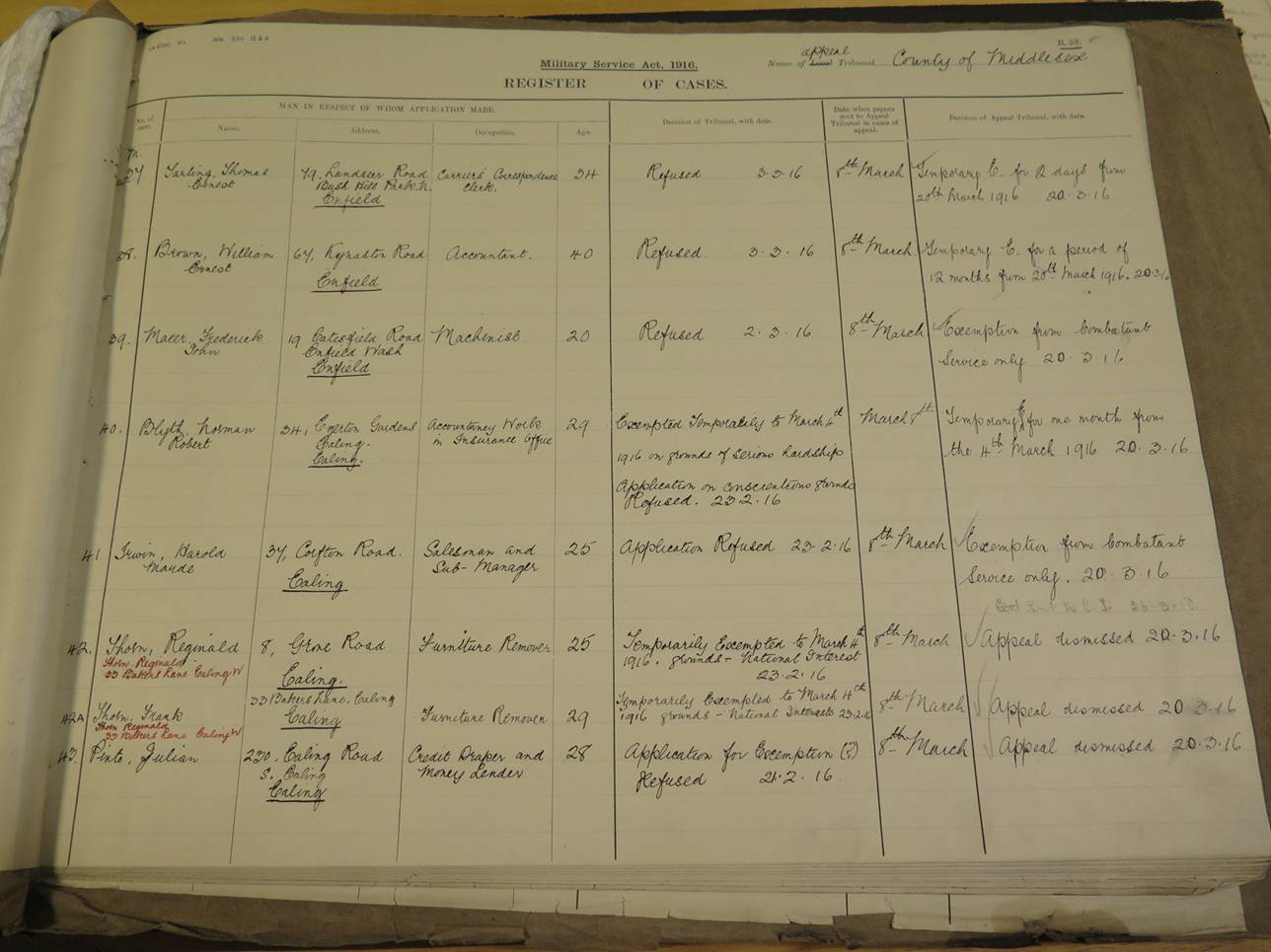 Using the Registers of Appeals (MH 47/7 and MH 47/71) you can quickly obtain an overview of how many cases were heard each day and whether there are any patterns. Appeal cases were those men (and the Military Representative) appealing against the decision of Local Tribunals, the first level of tribunal within the exemption system set up by the Local Government Board.

For example, 20 March 1916 was one of the earliest meetings of the Middlesex Appeal Tribunal. On this day, they heard 32 cases. Of these:

While a snapshot of just one day of cases before the Middlesex Appeal Tribunal will not provide us with definitive answers about how fair the Tribunal system was, the mini-case study of 20 March 1916 does highlight both a fairly even mix of dismissals and exemptions.

When analysing the case papers of some of these appeals, the diverse and sensitive personal circumstances brought before the Tribunal system is evident. It is also clear that receiving an exemption status was not always a guarantee of long-term protection from conscription.

One of the applicants who successfully received an exemption after their initial application dismissed was Thomas Earnest Tarling of Bush Hill Park (MH 47/8/22). However, the Appeal Tribunal only granted an exemption of two days in length, despite Tarling’s need to move his father into smaller accommodation and sell off family belongings to raise money to support his medical needs.

Register entry for Thomas Tarling, who obtained an exemption for two days in length from conscription (catalogue reference: MH 47/7)

While selling off furniture and downsizing accommodation seems a very small ask compared to those families who had lost loved ones during the conflict, it is a reminder that for some across the country, looking after their family and household was of more immediate importance than answering the patriotic call for King and Country. 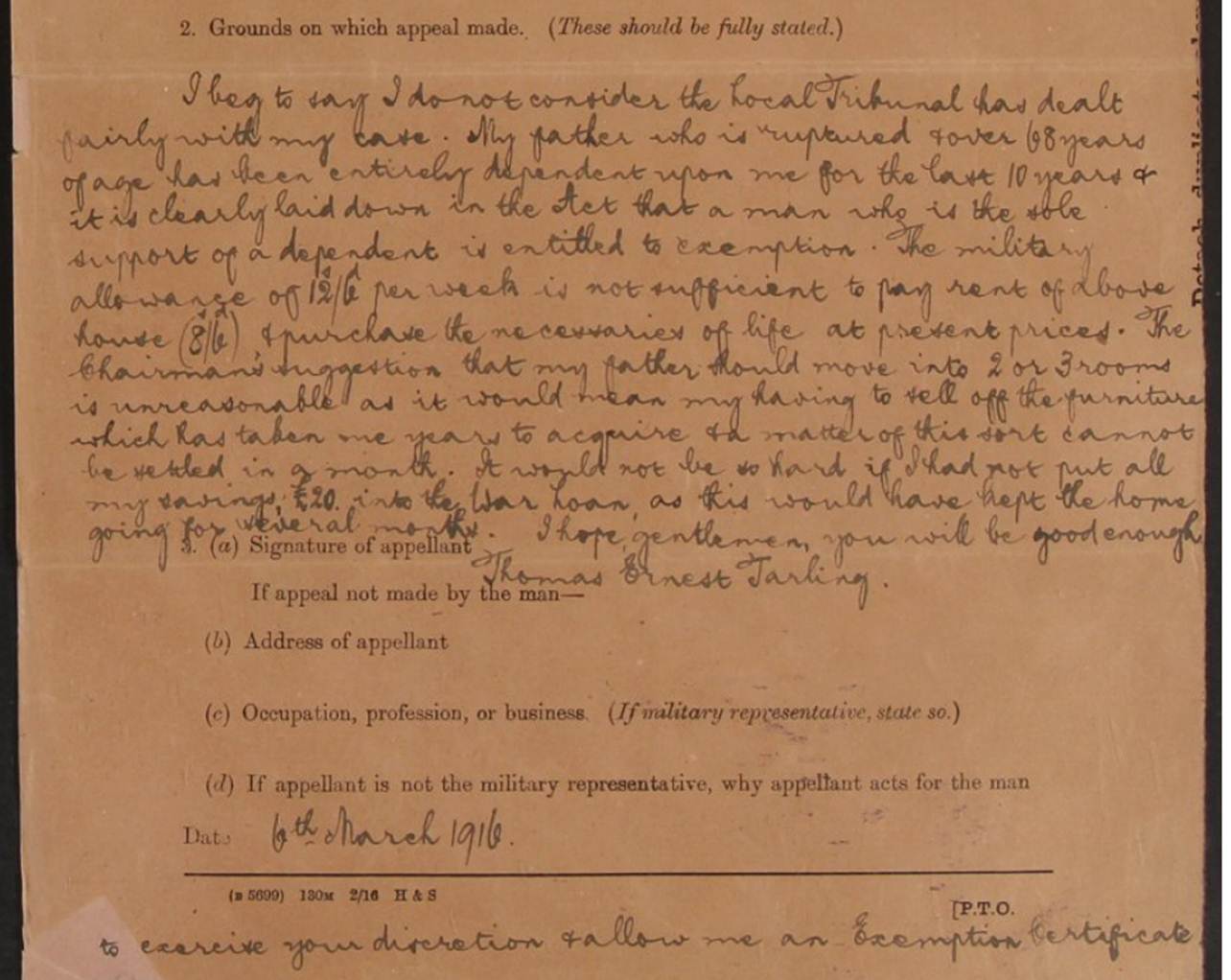 Case paper of Thomas Tarling showing the impact of Army service upon his father and domestic position (catalogue reference: MH 47/8/22)

A final example I wish to analyse comes in two parts. Case Paper M42 is of Reginald Thorn and M42A is of Frank Thorn, brothers from Ealing.

Both cases were raised for application and subsequent appeal by their employer, who was also their father, Reginald Thorn (Senior). Both cases were based on ground A of the Military Service Act exemption process, and argued that the applicants’ current work of furniture removal should be deemed as of more national importance than joining the army.

The Ealing Local Tribunal had provided the eldest son, Frank, with an exemption on 23 February 1916 until 4 March, to allow some time to find a replacement to support the family business. This short exemption was still longer than the limited one offered to Thomas Tarling. Reginald Thorn, the middle son, had received no local tribunal exemption. 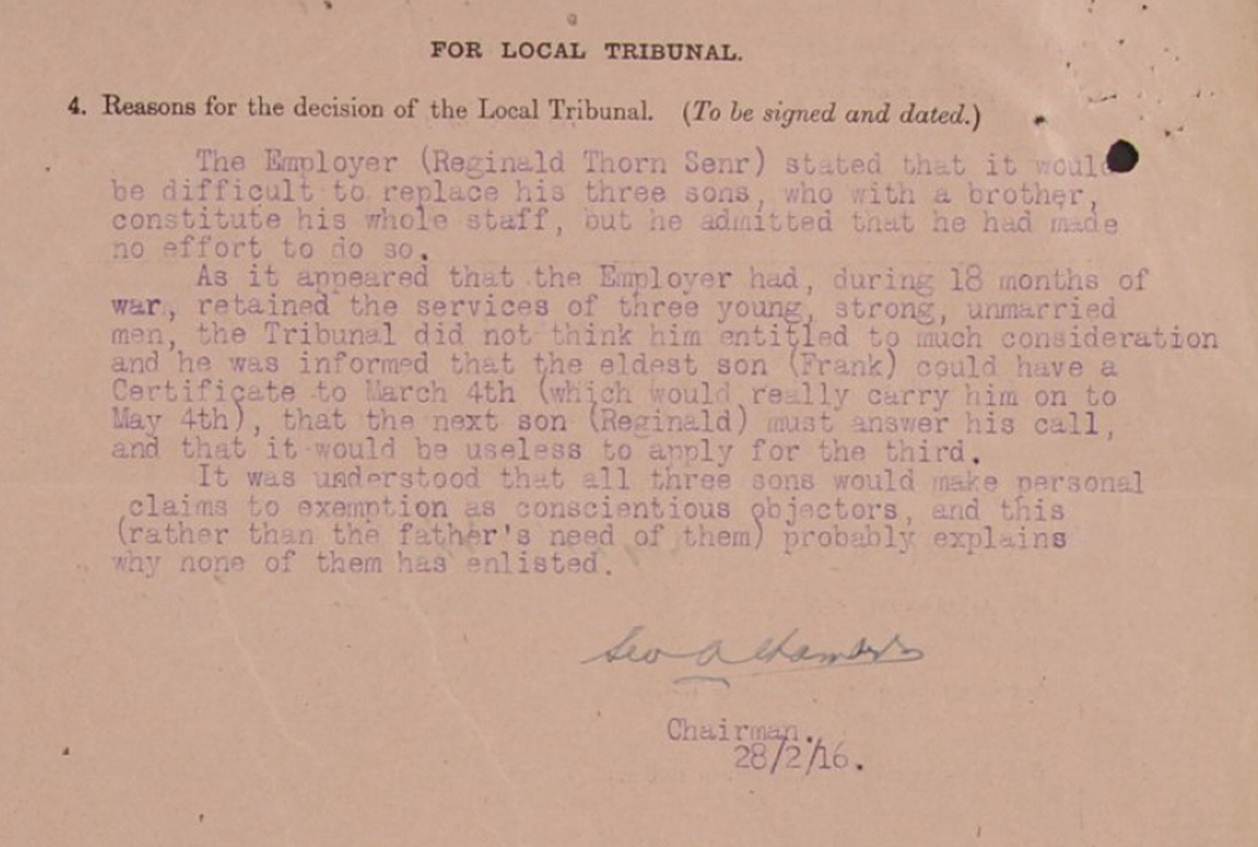 Case paper of Reginald Thorn showing the views of the Local Tribunal chairman upon the cases brought by the family (catalogue reference: MH 47/8/24)

Both cases were dismissed by the County Appeal Tribunal and no further exemption was offered. Importantly in this family case, the Ealing Tribunal chairman considered that the father of the Thorn boys should not be ‘entitled to much consideration’ as he had retained the services of ‘three young, strong, unmarried men’ for 18 months of warfare.

Subsequently, each son raised their own personal applications for exemption to the Ealing Local Tribunal, based upon a conscientious objection to warfare (ground F). The service records for Frank, Reginald and Bertie all survive on the Ancestry website, revealing all three were posted to the Non-Combatant Corps having received an exemption from Combatant Service from the Ealing Local Tribunal.

While the decisions of Military Service Tribunals can certainly appear as harsh, such as the Tarling example, the unprecedented nature of the First World War made it a very difficult and unique period throughout the country. Military service, be it voluntary or conscripted, would cause tremendous upheaval for families and their security. Likewise, the shared or contrasting experiences of loss, sacrifice and survival would strain local community relations for many years to come.

To search and view the Middlesex Appeal papers, please see our online research guide – they are free to download from Discovery, our online catalogue. Our guide also now includes a link to a list of surviving local tribunal records, compiled by the Federation of Family History Societies as part of our project.