Death of a Prince

On 27 October 1914 at Zonnebeke in the Ypres Salient, Prince Maurice of Battenberg, grandson of Queen Victoria, first cousin of King George V and the German Emperor Wilhelm II was killed in action whilst serving with the 1st Battalion, the King’s Royal Rifle Corps.

He was born at Balmoral on 3 October 1891, the youngest grandchild of Queen Victoria and son of her youngest child, Princess Beatrice and her husband Prince Henry of Battenberg. He was named Maurice Victor Donald. Maurice after his great-grandfather, Count Maurice von Hauke, Victor after his grandmother the Queen, and Donald as he was born in Scotland. He was a king’s cadet at the Royal Military College, Sandhurst from 1910 to 1911. He was commissioned as a 2nd lieutenant in the King’s Royal Rife Corps in March 1911 and served with ‘C’ Company, 1st Battalion.

The battalion went to France with the British Expeditionary Force as part of the 6th Infantry Brigade, 2nd Division landing at Rouen on 13 August. By 15 August they were in Belgium and first came under fire just north-east of Givry on 23 August. They took part in the retreat from Mons and the battle of the Aisne in September. Then came the first battle of Ypres and the battles of Langemark and Gheluvelt. It was between these battles that Maurice was killed in action. The war diary of the 1st battalion for 27 October records: ‘During the advance eastwards from the ridge the battalion came under terrific shell fire as well as rifle fire… Poor [Prince] Maurice was killed outright just on top of the ridge’ (WO 95/1358/3). 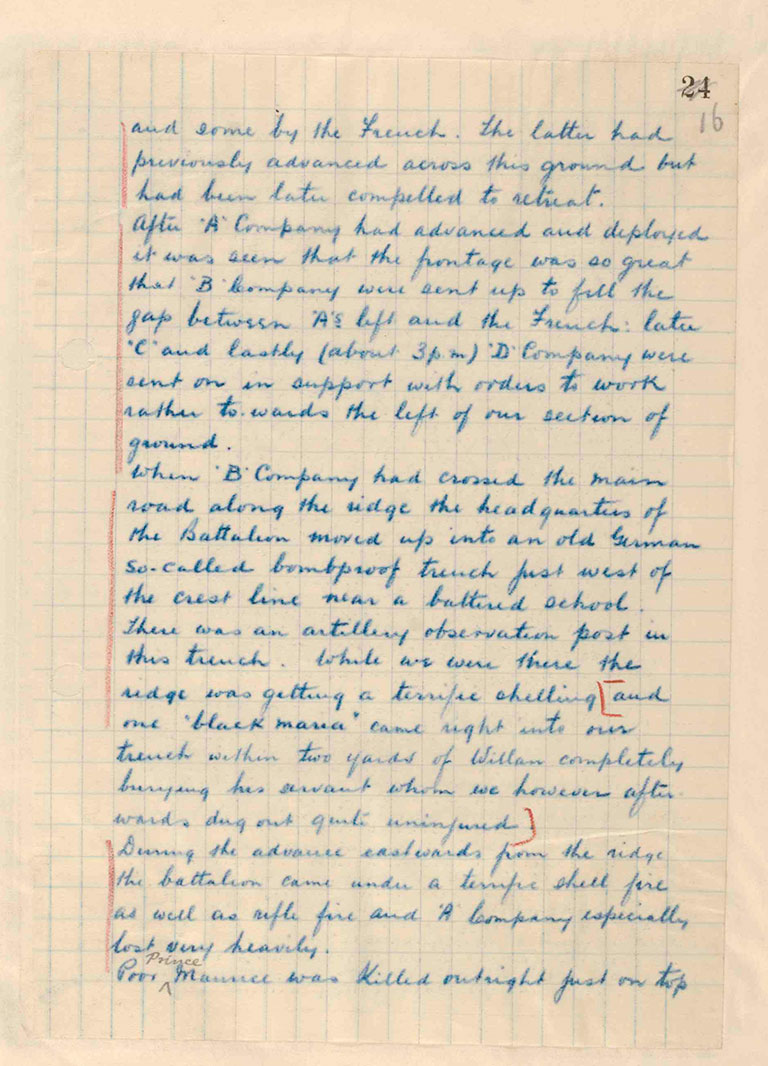 The news of the prince’s death was passed up the line of communication to Brigadier-General Fanshawe,  the officer commanding the 6th Infantry Brigade and from him to Major-General CC Munro, commander of the 2nd Division. Munro interviewed the Brigadier at 11.30 that night before informing Lieutenant-General Douglas Haig the commanding officer of the 1st Army Corps that the prince ‘was killed by a shell whilst gallantly leading his company forward to attack across a ridge, east of Zonnebeke’ (WO 339/7854). Haig informed GHQ at 7.00 am the following morning, stating: ‘By the death of H.H. Prince Maurice of Battenberg the Army loses a most gallant and valuable officer. In peace and war he has done his duty to King and Country’. Sir John French forwarded the report ‘with deep regret’ to the War Office later that morning (WO 339/7854).

The battalion war diary for 31 October records: ‘Denison, Gough, the Sgt Major, Sgt O’Leary and a few others went down to poor Maurice’s funeral in Ypres’. This later became the Ypres Town Commonwealth War Graves Cemetery. In his fourth despatch of 20 November, Field Marshal Sir John French regretted ‘the heavy causalities which we have suffered; but the nature of the fighting has been very desperate, and we have been assailed by vastly superior numbers. I have every reason to know that throughout the course of the battle we have placed at least three times as many of the enemy hors de combat in dead, wounded and prisoners.’ This was published in the London Gazette, 2nd Supplement, 27 November 1914.

The news of the death of her favourite son was devastating to Princess Beatrice who had lost her husband on active service in 1896. The press also recalled the father and son as both giving their lives for England. Princess Beatrice went through the same emotional loss that all mothers who lost sons suffered, but declined Lord Kitchener’s offer to have the body returned to England for burial.

In September 1920 the Ypres League was founded as an association for those servicemen who had survived the battles around the town during the course of the war, and to remember those who had fallen. The King, the Prince of Wales and Princess Beatrice were its patrons. For many years she would lay the wreath of the Ypres League at the Cenotaph. She died peacefully in her sleep on 26 October 1944, one day before the 30th anniversary of her son’s death on the 27 October 1914. 1