‘Death by hanging’: the Nuremberg Trials

These two German words pronounced somewhat defiantly, and almost flippantly, by 21 Nazi leaders, echoed through a very silent room of the Nuremberg Court on 21 November 1945, the second day of what the world would come to know as the Nuremberg Trials. 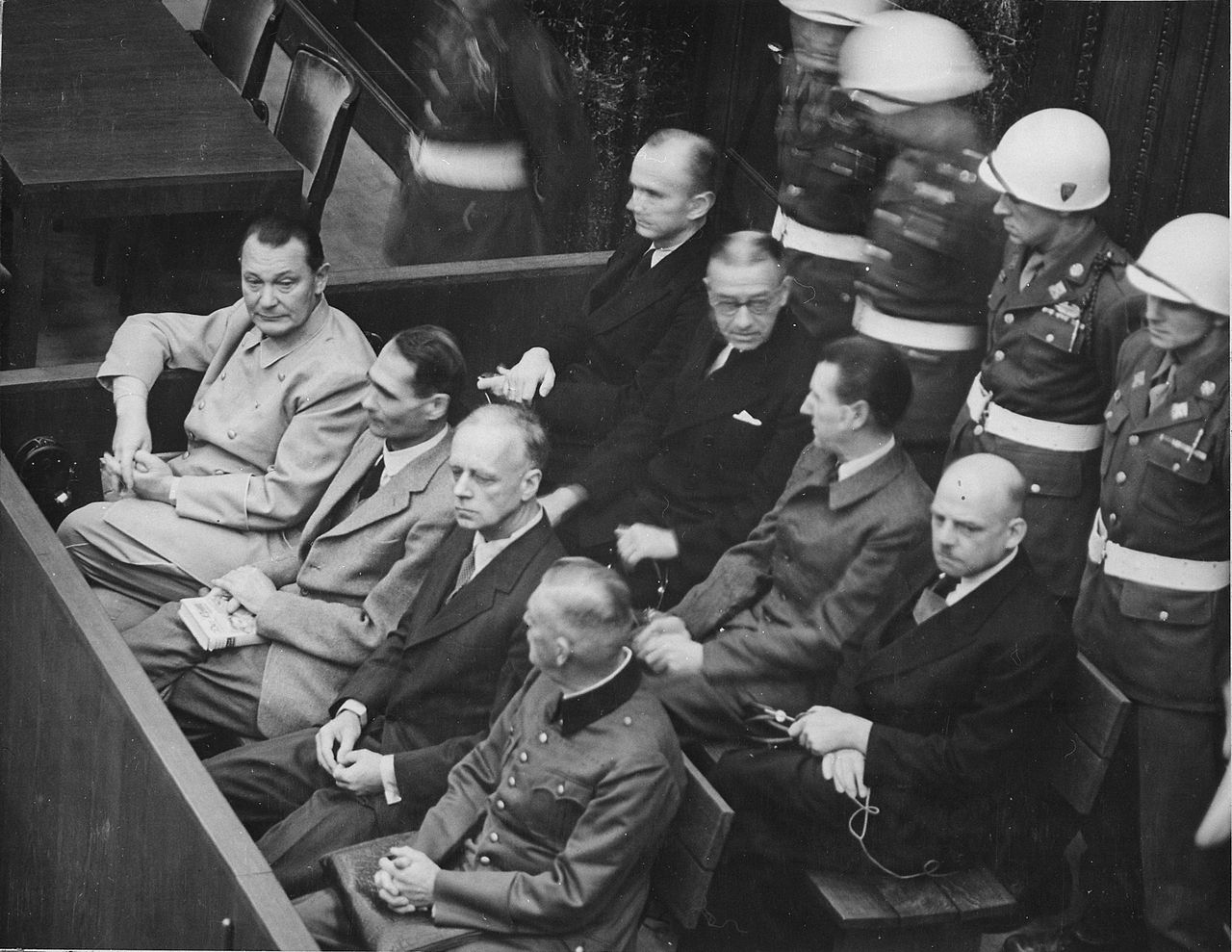 Defendants in the dock at Nuremberg (image from Wikicommons)

Establishing the International Military Tribunal had not been an easy task. The London Charter of 8 August 1945 (FO 93/1/266) had defined its principles and procedures but, in practice, it was a judicial nightmare. There was no precedent for such an international tribunal combining different legal traditions. These crimes were of such atrocity and on such a scale that they went beyond the scope of any existing legal system. How could they be judged? Who should be judged? Britain, France, the United States and the Soviet Union all had their own list. After difficult negotiations, they settled on 24 men (FO 371/51402).

In the meantime, the British delegation was going through a crisis of its own. On 25 October 1945, Sinclair, the British prosecutor’s secretary, wrote to the Chief of Staff of the Control Commission to discuss ‘a matter that has been causing us here a bad headache’. Although the Court had been largely spared, Nuremberg was a ruined city and there was ‘no source of outside entertainment’. Yet the outcome of the negotiations also depended on the delegation’s capacity to display lavish hospitality. At the beginning of November, the prosecutor himself wrote to the Chancellor of the Exchequer, reiterating the request for ‘sufficient tobacco and liquor to smooth the way of these negotiations with our Allied colleagues’. In the end, spirits were provided by the Government Hospitality Fund, and Sinclair was able to write, just after the opening of the trials, that he was ‘hoping that soon a more frequent resort to the cup that cheers may serve to illume the sojourn of colleagues in a strange land’ (TS 26/171).

Letter from Sinclair to the Chief of Staff of the Control Commission (catalogue reference: TS 26/171)

All being well on the liquor front, and the Allies having come to an agreement, the trial could begin. There were only 21 men sitting in the dock, as Robert Ley had committed suicide in prison, Martin Bormann was never found, and Gustav Krupp von Bohlen und Halbach was deemed to ill to stand trial. They were:

All these men had held senior positions and now stood before eight judges, two for each victorious nation, in what had been the Holy City of Nazism. The trial opened on 20 November 1945, presided over by British judge Lord Justice Lawrence, and was going to last four months and hold 403 open sessions in four languages (German, English, French and Russian) with simultaneous translation (FO 371/57435-57517). The defendants were indicted on four counts: ‘common plan or conspiracy to commit, or which involved the commission of Crimes against Peace, War Crimes, and Crimes against humanity’, Crimes against Peace, War Crimes and Crimes against Humanity – all of which had been defined by Article 6 of the London Charter. 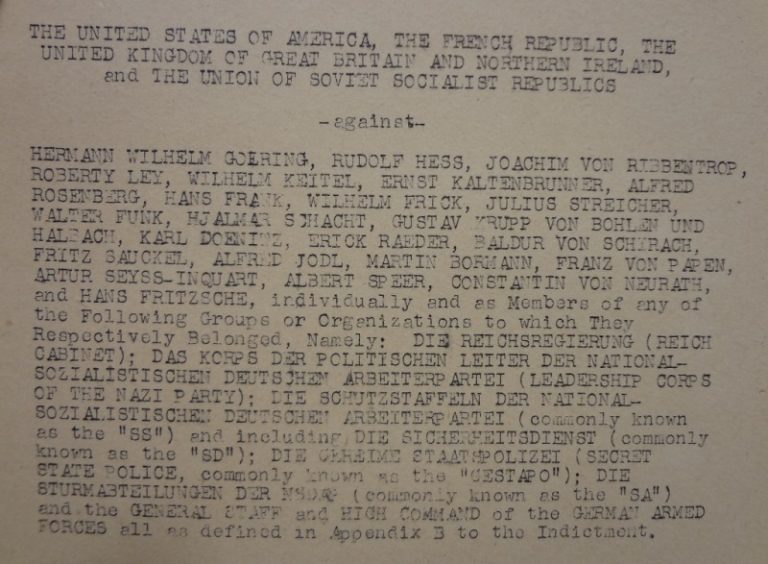 Robert Jackson, the chief American prosecutor, was afraid the trial might be hampered by lack of evidence. The judges and their staff, however, were absolutely swamped with evidence. Witnesses gave oral evidence, which had a substantial impact, and the Tribunal received thousands of letters from the German public, volunteering information and submitting pictures and press cuttings. One of them insisted that it should be forbidden to use the title ‘Führer’ when referring to Hitler (FO 1019/55).

He also included a picture showing the entrance of a Hitler Youth camp – the inscription reads: ‘We were born to die for Germany’ (FO 1019/55). 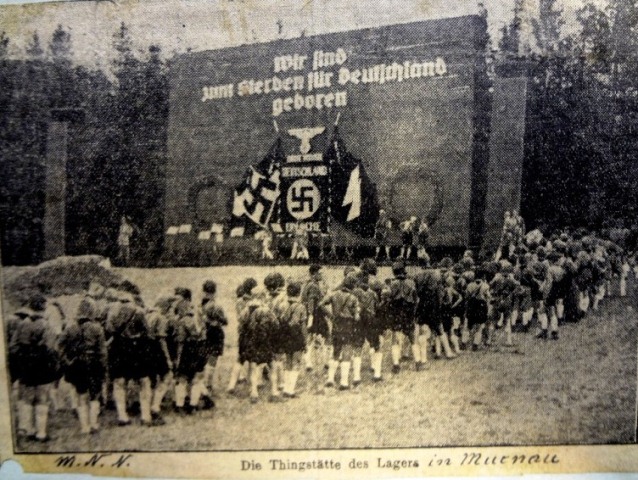 The entrance of a Hitler Youth Camp (catalogue reference: FO 1019/55)

An anonymous sender provided photographs of excellent (technical) quality, with captions in strikingly poor German, depicting ‘the victims and work of destruction by the SS’. Most of them are extremely shocking, others merely highly unpleasant and disturbing. One shows a very pale, bespectacled, black-clad woman standing threateningly in front of a cupboard. The inscription above her reads ‘everyone in this room must act and speak courteously’ (although English doesn’t really do justice to the chilling tone of command of the German phrase), and the poster on the wall advertises rules for parents. The caption on the back of the photograph states: ‘I am not guilty’ (FO 1019/55). 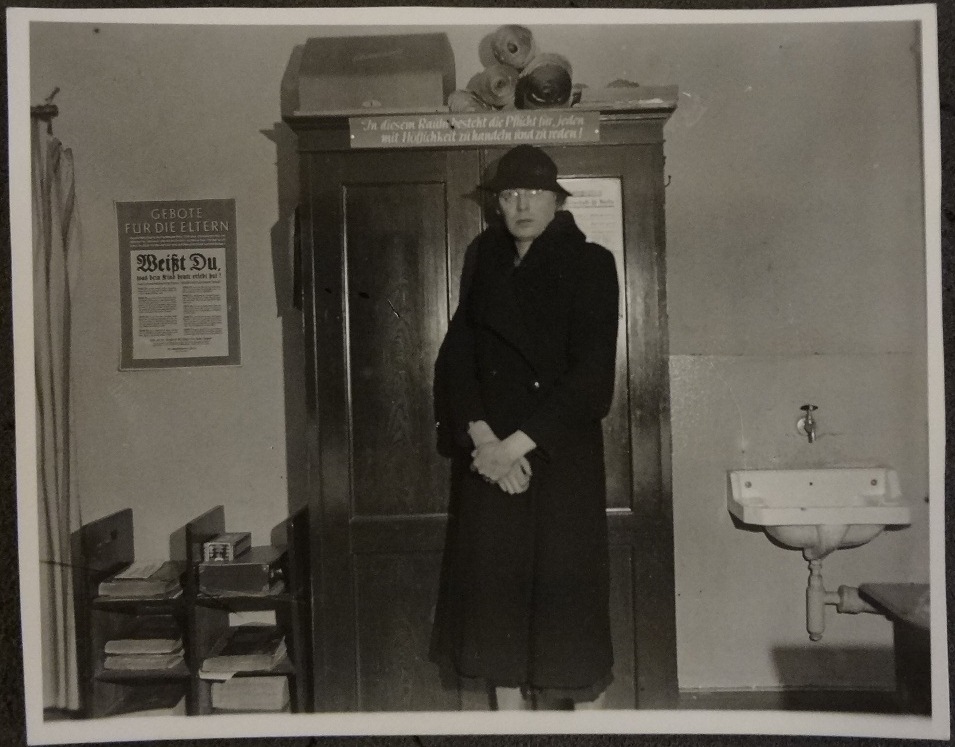 The final statements made by the defendants on 31 August 1946 show how dangerous these men still were, and how necessary a public trial was. Goering denied having anything to do with murder, Hess claimed to have acted out of his ‘ardent love for [his] people,’ and Seyss-Inquart reasserted his loyalty to Hitler (FO 371/57517). 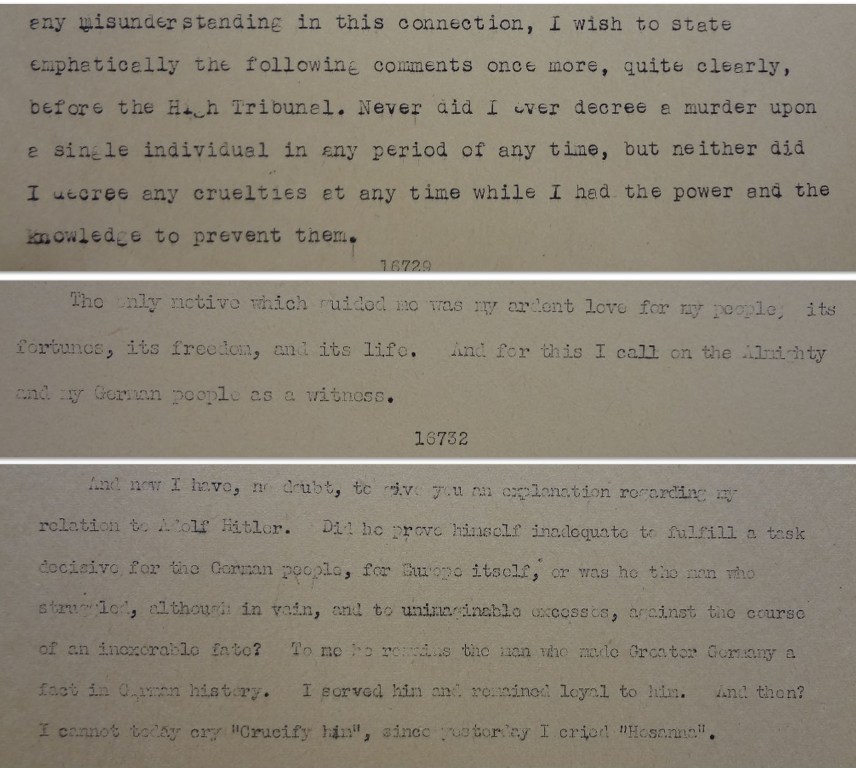 The sentences were finally read in the afternoon of 1 October 1946: ‘Defendant Hermann Wilhelm Goering, on the Counts of the Indictment on which you have been convicted, the International Military Tribunal sentences you to death by hanging’. The other sentences were:

Despite the ‘dissenting opinion’ of Soviet judge Nikitchenko regarding Schacht, von Papen and Fritzsche, the three of them were acquitted. Martin Bormann, judged in abstentia, was sentenced to death by hanging (FO 371/57517). 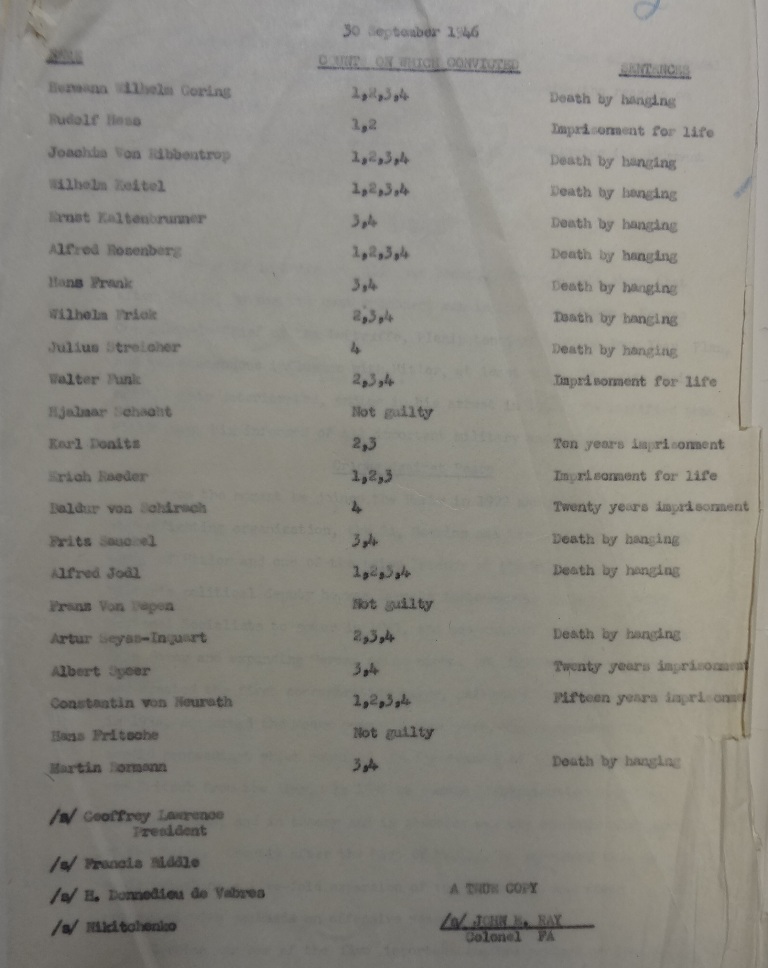 The executions of those defendants condemned to death were an additional problem. The Americans wanted to carry them out in Berlin, but it was deemed preferable to remain in Nuremberg for security reasons, but also because it was imperative that their bodies ‘shouldn’t become objects of cult at a later date’ (FO 945/346).

All were executed on 16 October 1946 in the gymnasium of the prison, except Goering who committed suicide in his prison cell the day before. The Daily Express correspondent reported from Nuremberg: ‘I fear that in the bomb-blasted gymanasium of the Nuremberg prison a new legend of heroic militant Teutonism may have been born’ and quoted their last words. ‘Consider,’ he wrote, ‘the theme of “God save Germany and make her great once more”, which was the gist of all the hanged men’s last words. And, above all, consider Goering’s final defiance’(TS 26/172). To prevent this legend from growing, the bodies were incinerated in Munich and the ashes scattered over the river Isar.

This trial which opened 70 years ago was only the first and best known of the Nuremberg Trials. It was followed by 12 others, lasting until December 1949. It was at the time, and still is today, criticised for being the ‘victors’ justice administered over the losers’ and its moral legitimacy had been questioned – some had pointed out that the Soviets had committed Crimes against Humanity at Katyn and Crimes against Peace when they had signed a non-aggression pact with Germany (FO 371/56474).

However imperfect the Tribunal may have been, it led to the definition of international law, and of the very new notion of crime against humanity. It established the principle of individual responsibility. It was a civilised alternative to mob justice. Germany, its former allies and its former enemies could take the first step on the long road to reconciliation and recovery.

‘The wrongs which we seek to condemn and punish have been so calculated, so malignant, and so devastating that civilisation cannot tolerate their being ignored because it cannot survive their being repeated.’