Death, the doctor and the detective writer

Recently, while researching documents to use as part of a document display, I chanced upon a file relating to a murder which had occurred in the 1930s, very close to my childhood home. Idle curiosity led me to order the document and have a look at it.

There among the neatly-typed police reports and statements I was greatly surprised to find a letter penned by one of the greats of twentieth century detective fiction – Dorothy L Sayers – who had found herself drawn into the case by a bizarre and unexpected telephone call.

At a quarter past five on the evening of 15 December 1937, Sayers received a call at her London home from Dr John Dancy. A complete stranger to her, he explained that his wife had recently been murdered and asked if she would like to come and visit the scene of the crime. His motive was apparently purely altruistic – offering an author of detective fiction the opportunity to view a real crime scene first-hand and to learn details of the investigation procedure that could be of use to her in her novels.

At the time, Sayers was one of the best-known authors of crime fiction, a genre hugely popular in the early decades of the twentieth century. She was evidently baffled by the bizarre telephone call; and after putting the doctor off with a polite deferral, she made contact with her acquaintance Sir Norman Kendal. As Assistant Commissioner (Crime) he held one of the highest ranks within the Metropolitan Police, and she asked for his advice on how to proceed. 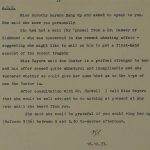 Memorandum to Sir Norman Kendal reporting that Sayers wished to speak to him, MEPO 3/1724 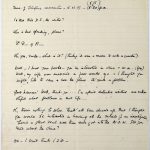 A page from Sayers’ memorandum of her conversation with Dr Dancy, Catalogue reference MEPO 3/1724 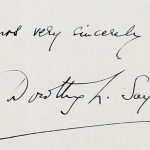 Sayers and Sir Norman were both members of The Detection Club, an association whose membership principally consisted of writers of crime and detective fiction. Sayers was a founding member and later served as club president for several years, while Sir Norman had been a member since 1935.

The club’s theatrical initiation rite, in which new members swore an oath with one hand placed on a skull (affectionately known as Eric) exhorted new members to create in their books crimes that did not rely on ‘…Divine Revelation, Feminine Intuition, Mumbo-Jumbo, Jiggery-Pokery, Coincidence or Act of God…’ in order to be solved.

Sayers, a former advertising copywriter, is said to have written the oath herself. Members collaborated on round-robin crime stories in which each wrote a chapter, and which were produced both in print and for BBC radio broadcasts. They also shared their thoughts and theories on real-life crimes and murders – presumably Sir Norman would have had much to contribute to these conversations.

The phone call from Dr Dancy obviously perturbed Sayers enough for her to seek Sir Norman’s advice. She sent him a letter enclosing a six-page handwritten memo (she apologises for it not being typed due to her not having a typewriter in town) recounting to the best of her ability the entire 15-minute conversation she had with the doctor.

The crime itself was a particularly bloody one. In the early hours of 23 November, Dr Naomi Dancy had been murdered at her home in Richmond, shot at close range through each eye as she slept. The killer – her brother Maurice Tribe – had then attempted to shoot Naomi’s husband Dr John Dancy. Afterwards he locked himself in the lavatory and cut his own throat. The verdict of the inquest had been one of murder and suicide, with the surviving doctor considered extremely lucky to have escaped becoming an additional victim.

Maurice, a chronic alcoholic who had been terribly injured in the war, had been brought to the Dancy’s house to recover from a recent drinking binge. While there he had apparently discovered he had been left out of new insurance policies the couple had drawn up – this was said to have prompted his murderous frenzy. 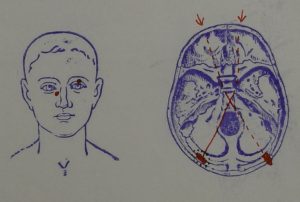 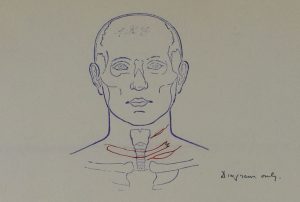 Illustration from the post mortem of Maurice Tribe showing injuries to throat, MEPO 3/1724

Despite his promising start Maurice, like so many of his generation, had been terribly and irrevocably damaged by the Great War. A severe head wound in 1916 led to his losing an eye and left him with shrapnel embedded near the brain that could not be safely removed. He had married and separated in the intervening years, as the trauma of his injuries led him to rely more and more heavily on alcohol and drugs.

By the age of 43 his health was ravaged and he was losing the sight in his remaining eye. Statements from Tribe’s estranged wife and her sister agreed that he was deeply troubled and enaged in frequent bouts of heavy drinking – he still owned his service pistol and had spoken frequently of ending his own life. After the crime, bottles of methylated spirits and cocaine hydrochlor (a powerful anaesthetic) were found in his room.

A touching tribute was published in The Daily Telegraph the week after his death by a friend who acknowledged the change in him over the years since his injury;

‘In character of habit, in violence of speech and conduct he showed persistent deterioration. Who that has not been wounded to the edge of the brain can judge him?’

It would seem there was little doubt among those who knew him that he had indeed committed this terrible crime.

A moment of rage or premeditated plan?

The investigating police officers, too, seem to have had very few doubts that the crime was a clear-cut case of a damaged man who snapped.

The Doctor’s own explanation to Sayers is, however, far from clear – instead of the straightforward motive put forward by the police he claimed that Maurice had instead long planned the murders of both his sister and brother-in-law, as well as his own death, in order to benefit from an insurance policy (he does not elaborate on who was to cash in on this).

Dancy went into copious detail during his call to Sayers, rattling off the reasons for the crime as well as evidence demonstrating that he himself was innocent. However, his convoluted explanation seemed to raise suspicions in Sayers rather than allay them, prompting her to contact Sir Norman. 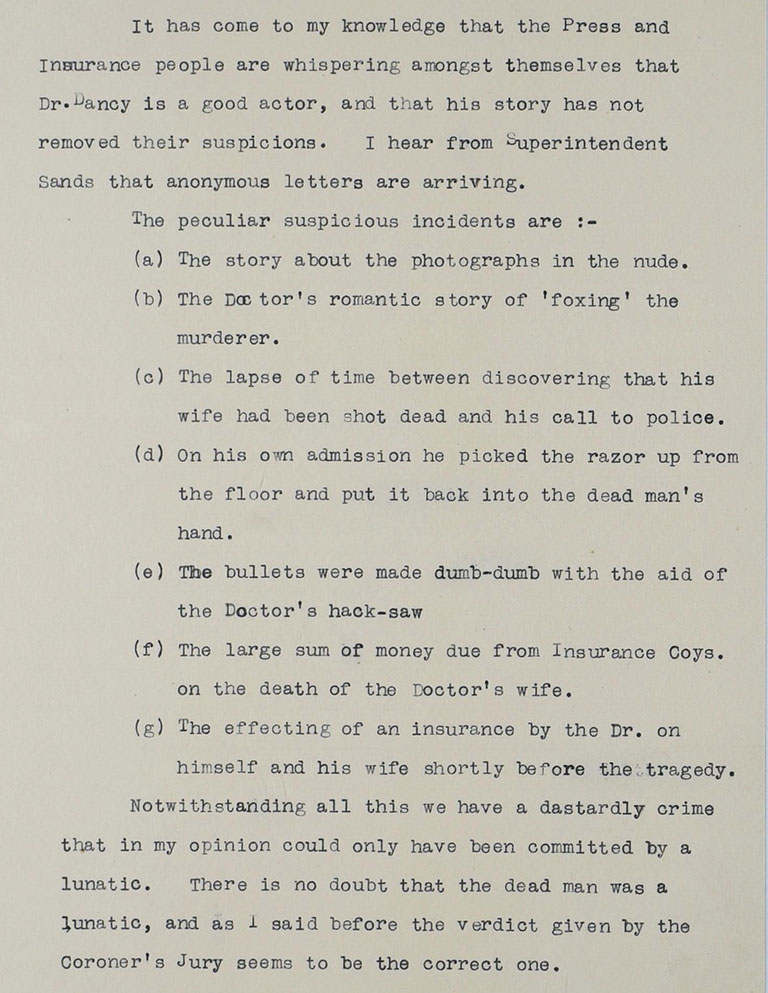 Sayers was not the only one whose suspicions were aroused – the file contains two anonymous letters received by the police asking them to investigate Dr John Dancy in the deaths. One of them states:

‘Believe me I am not the only person over here who thinks he murdered his wife & brother-in-law himself.’

Seemingly suspicious details do indeed jump out from the statements provided. The doctor washed the hands of the dead man before the ambulance arrived, and the cut-throat razor was purchased by him (Maurice could not use it due to his missing eye). There were many other small but intriguing details; however, ultimately none of these seem to have provided anything tangible enough for the police to treat as credible.

Strangely, one of the ‘suspicious incidents’ listed by the police is the presence of photographs of nude women found in Maurice’s room: Dr Dancy admitted that he had procured these for him. However, the reason why these would indicate guilt is unclear – perhaps they were just meant to show a moral deficiency on the part of one or both men.

Also found in Maurice’s room was a copy of a detective thriller that Dr Dancy refers to as ‘trashy stuff’ – a tad ironic, considering his overtures towards Sayers only weeks later.

It is certainly bizarre to think that, barely three weeks after the horrific murder of his wife of many year, Dr Dancy would be cheerfully extending an invitation to a crime writer to come and have a poke around the scene of the crime. Strange indeed, but not necessarily indicative of anything more sinister than a lack of appropriate social mores. His attempts to persuade a reluctant Sayers – ‘I’ll just give you a few more details now, to whet your appetite’ – come across as odd and rather distasteful considering the circumstances. However, it is possible that Dr Dancy, aware of the suspicions being levelled against him, contacted Sayers in a misguided attempt to show that he had nothing to hide, and was willing to let an expert in to examine the scene in order to prove his innocence. 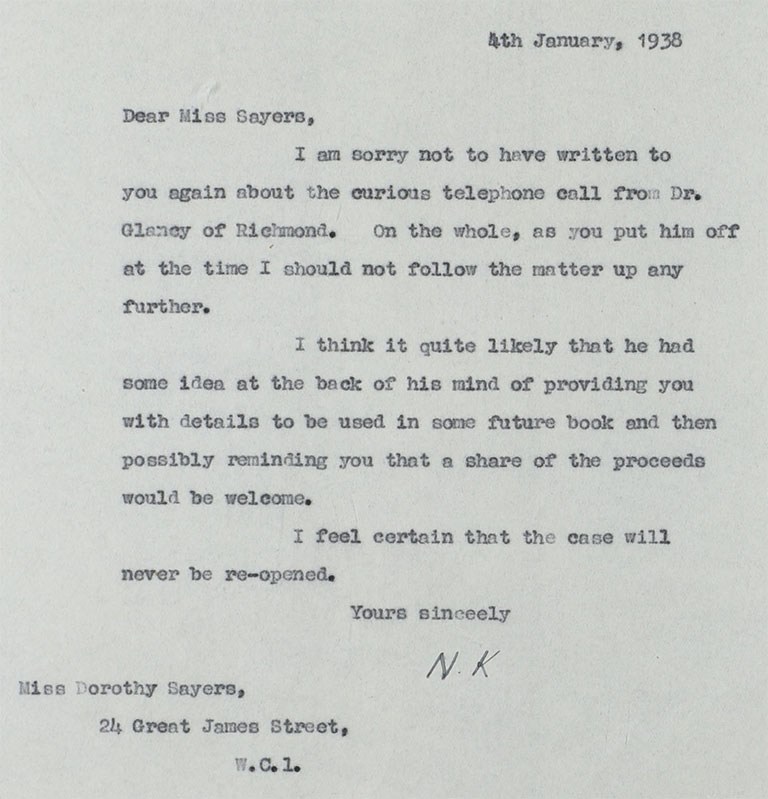 ‘ I feel certain that the case will never be re-opened.’ Sir Norman Kendal’s response to Sayers, MEPO 3/1724

Ultimately the police felt they had made the right decision, and Sir Norman’s (eventual) advice to Sayers was to leave the whole thing as it stood, as he felt the doctor’s reasons for contacting the famous writer were likely mercenary in nature.

As far as the police were concerned the case was closed: despite the suspicions surrounding the case, they were confident that the correct conclusion had been drawn. We do not know how well Dr Dancy’s reputation recovered from the case as it is acknowledged that, even with strong proof to the contrary, ‘it is possible that unfair rumours against the surviving doctor will persist notwithstanding’.