It’s been a long time in the planning but we are now less than one month away from the opening of By me William Shakespeare: A life in writing – an exhibition of some of our star Shakespeare documents.

The National Archives holds the largest collection of documentary evidence for Shakespeare’s life, including his last will and testament. We wanted to mark the 400th anniversary of Shakespeare’s death on 23 April with something a little different from our usual offerings. 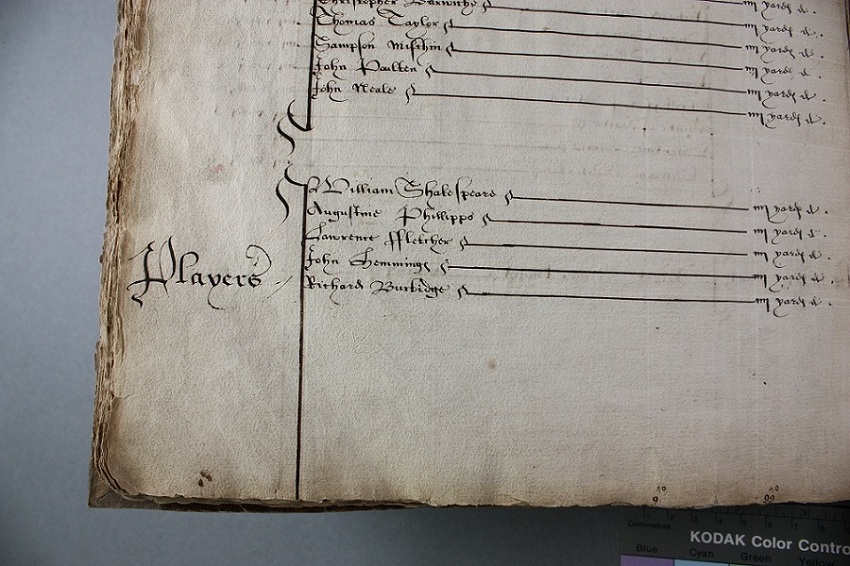 Master of the Wardrobe recording the issue of red cloth to Shakespeare (catalogue reference: LC 2/4/5)

Working with the Cultural Institute and the London Shakespeare Centre at King’s College London, we began to look at how we could bring our documents to life for an audience that may not be familiar with early modern material. In the early stages of development we invited Professor Gordon McMullan, Dr Lucy Munro and Dr Hannah Crawforth from the London Shakespeare Centre to view the documents. Despite being familiar with the contents from published sources, their reaction to seeing the documents convinced us that displaying the ‘real things’ could inspire fresh insights into a supposedly familiar story. In turn the academics brought an expertise in Elizabethan and Jacobean theatre that helped us to situate the documents in their wider theatrical and cultural context.

Viewing the documents sparked long conversations about the possible stories we could tell. We hold over 120 documents that contain evidence for Shakespeare’s life, found in many different record series, so in theory we had a great number of documents to choose from. However many of the documents are too large to display, some are too fragile, and plenty are very hard to read. With the help of the fantastic Collection Care team here at The National Archives we managed to whittle down our selection to a more manageable nine documents. These unique records fix Shakespeare in a time and place in early modern London, and it was the Shakespeare’s relationship to London that became the driving narrative for our exhibition.

The documents link to specific locations through the stories they tell: the dismantling of the Theatre in Shoreditch and the building of the Globe on Bankside; the performances for the royal court at Whitehall; Shakespeare’s life as a lodger in Silver Street. But we also started to think about where they were written –  in the law courts in Westminster, the court in Whitehall, and perhaps even the Tower of London. The documents were then housed in record offices across London – including the Chapter House at Westminster Abbey, Holbein Gate, and Doctors’ Commons – as it wasn’t until the mid-19th century that the central government records were gathered together in the Public Record Office (the predecessor of The National Archives). We liked the layers of connections to London that the documents offered, especially as the location chosen for their display, Somerset House, embodies just this palimpsest-like effect. The current building was built to house government offices (indeed it was where Shakespeare’s will was kept for a period); in its previous incarnation it had been known as Denmark House as it was the main residence of Queen Anna who had commissioned Inigo Jones to redesign what had been a Tudor Palace. 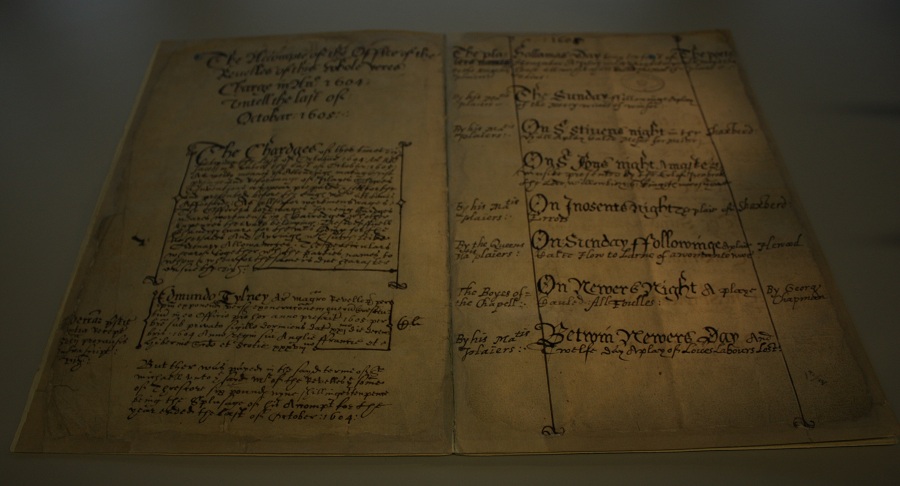 Thinking about locations helped us in the final element to our curation – an animation produced by 59 Productions, based on the stories told by the documents. For us this is another way to try and experiment with the interpretation of complex and sometimes obscure archival stories, and I’m very excited to see how this visualisation supplements and develops the more traditional interpretative curation of the exhibition.

Finally, a quick word about the will. Although written in Stratford-upon-Avon, the will was brought to London to be proved at the Prerogative Court of Canterbury in Doctors’ Commons near St Paul’s Cathedral, and it has been kept in London ever since. You will be able to read more about the will in future posts. But it is worth mentioning that of all the documents it is the will that seems so remarkably different when viewed in person rather than in a transcribed or digital format. The fragility of the paper, the progressively shaky signatures and the numerous crossings-outs give it a material instability that raises so many questions about Shakespeare’s last wishes.