When Steve Burgess and Juliette Johnstone from our events and exhibitions team first approached me about curating an exhibition on the Cold War, I was flattered – but I also felt daunted by the challenge. The Cold War – the 46-year struggle (1945-1991) for global supremacy by the superpowers – is such a massive topic with so many potential avenues to explore. How could we ‘narrow it down’, given the limitations of our available space?

Through a process of reflecting and discussion with colleagues, various themes began to emerge: these included Britain and the Bomb, wargaming, civil defence, espionage, and protest. I embarked on the research, starting with the documents I knew about already and investigating new sources. I started background reading in earnest, and organised a series of document displays for colleagues across The National Archives, to obtain their reactions to the documents.

An exhibition project is very much a team effort. Over time, we came to the view that the exhibition should focus on the impact of the Cold War on Britain. I became particularly fascinated by Security Service files detailing the exploits of infamous spies and traitors. 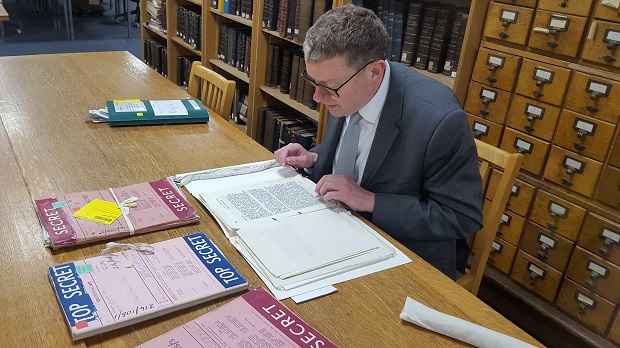 Mark Dunton researching a file about the spy Guy Burgess

As with all projects, there were various phases. Following a competition process, external designers Simon Leach Design were appointed. Juliette and I agreed the selection of the documents for the showcases. We also asked our record copying team to scan many documents for us.

Meetings began with the designers, and the layout and theming of the exhibition gradually took shape, going through many modifications. We came to the view that one half of the exhibition should be themed as a government bunker, and the other half should reflect the impact of the Cold War on the home. We began working together on the graphic designs such as the maps of Europe, the destructive power of nuclear weapons detonations and the Regional Seats of Government (the most famous of the Government bunker systems).

The process was an eye-opener for me, I had never been involved in such an ambitious project before.

By December 2018, we had a first draft of the text for the labels in the document showcases and the panels on the walls. This text went through many refinements: it was seen by several pairs of ‘eagle-eyes’ and checked many times for factual accuracy, spelling and grammar.

In the new year, the time came for the documents to be inspected by Collection Care, (who conserve the documents we hold), to make sure that they were in sufficiently good condition to display. They also needed to begin addressing the issue of how they should be displayed – whether they should be on mounting boards, for example. A lot of precise and dedicated work was carried out by expert conservators, including very careful arrangements about the light exposure for the documents. 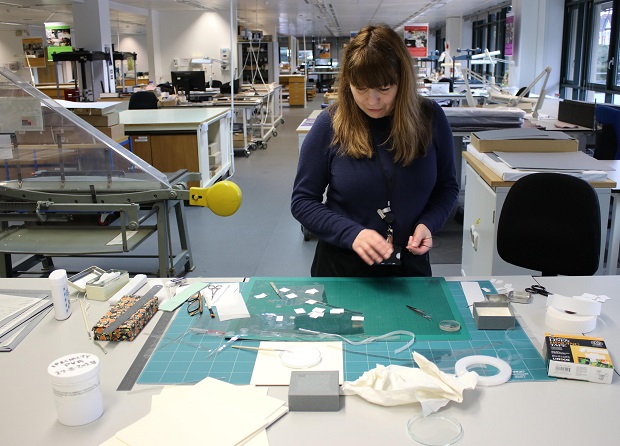 Attention also turned to the audio-visual features. I was interviewed by Digital Drama for our exhibition film, which gives an overview of the Cold War. It is very well shot and edited, with some well-chosen Pathé news clips. I still can’t quite believe that I am in a line-up which also includes Dame Stella Rimington, the former Director-General of MI5, and Dominic Sandbrook, the television presenter and historian. I also worked closely with na films, who produced a gripping audio-visual experience – the dramatisation of the WINTEX-CIMEX war exercise document from 1983.

We’ve broken new ground with this exhibition, as we are showcasing several items of popular culture alongside the documents. We wanted to make visitors reflect on just how much the Cold War affected popular culture – whether pop music, literature, films, games and toys. Staff donated items, which you can see in our 1980s living room cabinet, including pop records, Ian Fleming and Le Carré novels, and ‘Action Man’.

At times, it felt as if the process of checking text and designs would never end, but of course, it did. Then it was time for the installation process, carried out by the events and exhibitions team and outside consultants. It was wonderful to see the exhibition take shape, such as the 1980s-themed cupboard under the stairs (an inner refuge as proposed in the government’s advice to the householder, ‘Protect and Survive’). 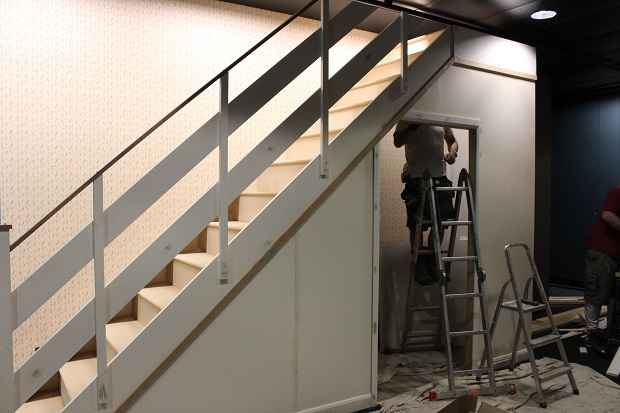 The ‘inner refuge’ under the stairs under construction

We opened on schedule on 4 April, the 70th anniversary of the birth of NATO. We are so pleased with reaction to the exhibition, in the media and from the public. It has already prompted many people to contribute their memories of, and reflections on, the Cold War on our witness wall (using 1980s-style typewriters to do so, if they wish!). We are delighted that people are joining in. 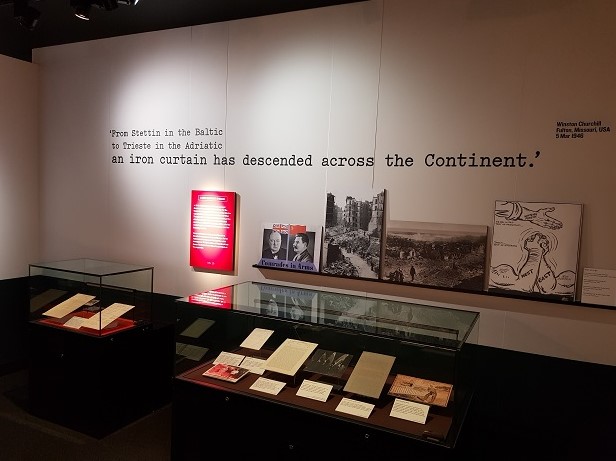 Document showcases in the section entitled ‘A new conflict emerges’

The warm reception for our Cold War exhibition shows the growing interest in contemporary history. This is a history that many people can still remember, but it is ‘proper history’ nonetheless: just as worthy of exploration as the Tudors and Stuarts. We hope that the exhibition and our Cold War season will lead to a better appreciation of how the Cold War affected Britain.