April marked a key turning point at The National Archives. For the first time ever the Digital Transfer Project team, alongside Digital Preservation, transferred born-digital video recordings for permanent preservation and display on Discovery, our catalogue. Born-digital records are those natively created in a digital format, such as emails, documents and spreadsheets. 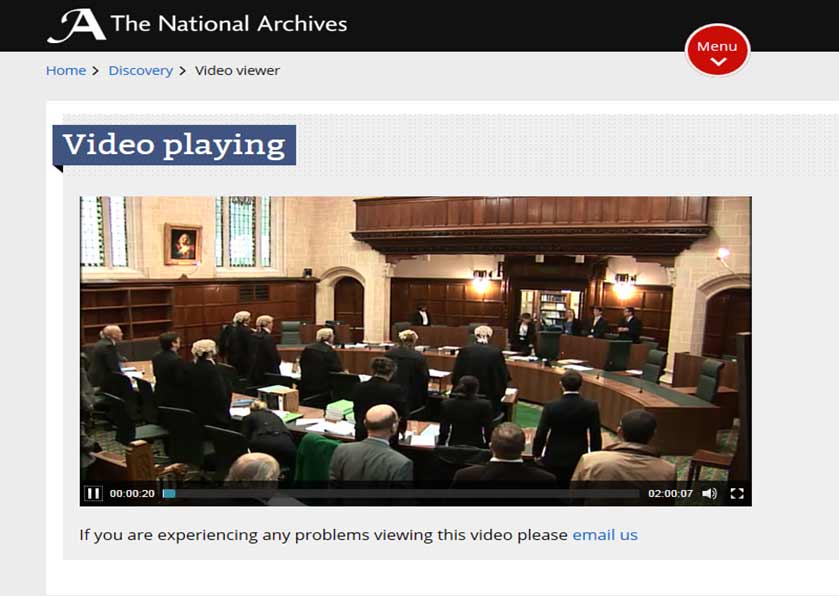 Screenshot of Supreme Court video in our catalogue

This transfer demonstrates our commitment to receiving contemporaneous digital material (in this case just seven years old) from government departments, as we mark the shift to being both a paper and born-digital archive.

As well as this being an exciting new born-digital records release, the UK Supreme Court records pave the way for us to showcase born-digital government records on a new platform on Discovery via our streaming service. These records are free to view anywhere in the world. Corresponding paper records relating to the hearings will be transferred to The National Archives in due course.

About the Supreme Court

The UK Supreme Court was created in October 2009; it replaced the Appellate Committee of the House of Lords as the highest court in the UK. The court hears appeals on arguable points of law of the greatest public importance for the whole of the UK in civil cases, and for England, Wales and Northern Ireland in criminal cases. It also hears high-level cases on devolution matters under the Scotland Act 1998, the Northern Ireland Act 1998 and the Government of Wales Act 2006; this jurisdiction was transferred to the UK Supreme Court from the Judicial Committee of the Privy Council.

The Supreme Court was created to achieve the complete separation of the UK’s senior judges from the upper house of Parliament. This separation emphasised the importance of the then Law Lords (now UK Supreme Court Justices) and increased transparency at the top of the judicial system.

The transfer of UK Supreme Court video recordings to The National Archives is a legacy of that transparency – taking members of the public inside the courtroom and offering an immediate view of court proceedings. The addition of these video recordings to our catalogue via our streaming service is a major evolution for The National Archives in how we present our collections to our readers, allowing them to explore records on a new platform, opening up a new dimension for how the historical narrative of the UK can be framed and considered.

Select proceedings at the Supreme Court are recorded and broadcast online; these make up the official record of court proceedings.

The video recordings preserved in this series (UKSC 1) by The National Archives capture the first year of proceedings of the Supreme Court. Footage of current and recent court cases is available direct through the UK Supreme Court website.

Each video in this series contains events recorded during a single morning or afternoon session of the UK Supreme Court and gives a unique insight into the daily drama, intricacies and structure of Supreme Court proceedings, including:

Individual appeal hearings, swearing-in ceremonies, costs hearings and the Court’s official opening ceremony will comprise a single session on a single recording, whereas hand-downs can have up to five individual sessions on one recording.

We’ve added thorough descriptions to each video, including an account of the judgement and reasons for judgement, in order to give a comprehensive overview. We hope it will make it easier and quicker to scan the records: you’ll be able to view the arguments put forward in each case, as well as relevant legislation and regulations, without needing to sift through hours of video.

At The National Archives we are at the forefront of digital records management and digital preservation, leaving behind the digital dark age and moving toward the digital enlightenment. This transfer of UK Supreme Court proceedings as born-digital video recordings highlights our ambition to deliver primary sources to researchers in a user-friendly digital format, and represents the first step toward presenting historical records on a new platform on Discovery via our streaming service.

If you want to find out more about the UK Supreme Court transfer or about digital transfer in general then get in touch with us at DigitalRecordsTransfer@nationalarchives.gov.uk