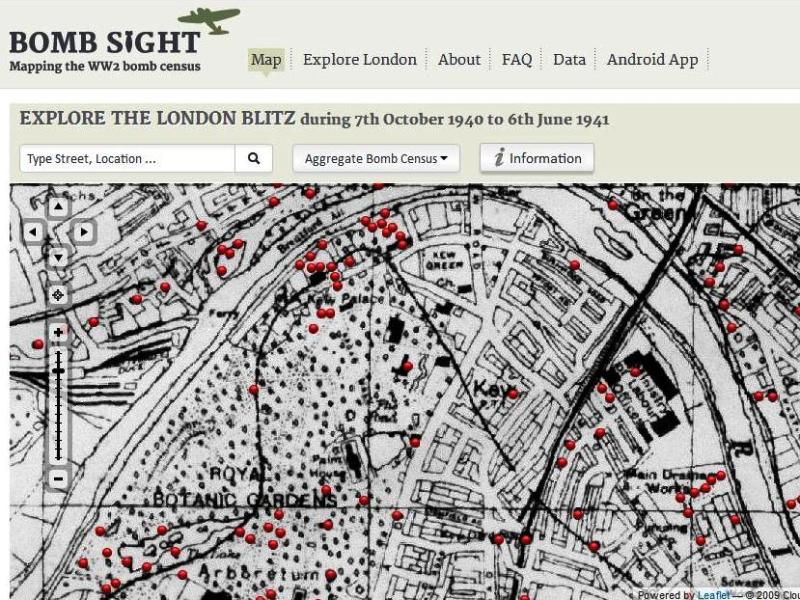 Kew and environs, as seen on BombSight.org

The title of today’s blog post comes from the first stanza of the poem Slough, by John Betjeman.

Come, friendly bombs, and fall on Slough!
It isn’t fit for humans now,
There isn’t grass to graze a cow.
Swarm over, Death!

In reality, of course, air raids during the Second World War would have seemed anything but friendly to those on the receiving end. 1

Many of you will already have heard about the new Bomb Sight website, developed by the University of Portsmouth, with funding from JISC. Bomb Sight is based partly on selected Bomb Census maps held here at The National Archives and allows users to identify where bombs fell during the London Blitz, between 7 October 1940 and 6 June 1941. We are delighted that interest in the website, both from the media and the public at large, has been much greater than the project team had anticipated.

The project leader, Dr Kate Jones, will be telling us more about the development of the site in a future post on this blog. 2 In today’s post, I want to focus on how you can go beyond the data available on Bomb Sight. For instance, you may be interested in bombing that took place after 6 June 1941 or in air raids on places outside London, or you may just want to find out more detail about a specific raid or bomb.

Second World War bombing is not an easy or straightforward topic to research. Finding out as much as you possibly can about a single bombing incident often involves looking at many different sources. Here is an outline of some of the most useful ones.

Although detailed information about specific bombs is not often available online, there are many different websites that include relevant material. These are some of my favourites:

As well as commemorating those who died on active service, the Commonwealth War Graves Commission has recorded the names of civilians who were killed during bombing raids.

Many books have been written about air raids and other aspects of life on the home front during the Second World War. David Blomfield and Christopher May’s Kew at War and Peter Doyle’s The Blitz are just two examples.

A facsimile edition of the London County Council bomb damage maps 4, edited by Ann Saunders, was published in 2005. Although this is now out of print, copies are available in many libraries, including our own reference library.

Newspaper reports at the time often mentioned specific raids or individual bombs and their effects, although details can be rather vague. In particular, newspapers tended not to mention the names and precise locations of buildings that were destroyed or severely damaged. This was to prevent the enemy from finding out too much about the impact of the bombing.

The largest collection of British newspapers is held at the British Library’s newspaper library. Many local archives and local studies libraries have excellent collections of local newspapers from the Second World War period. 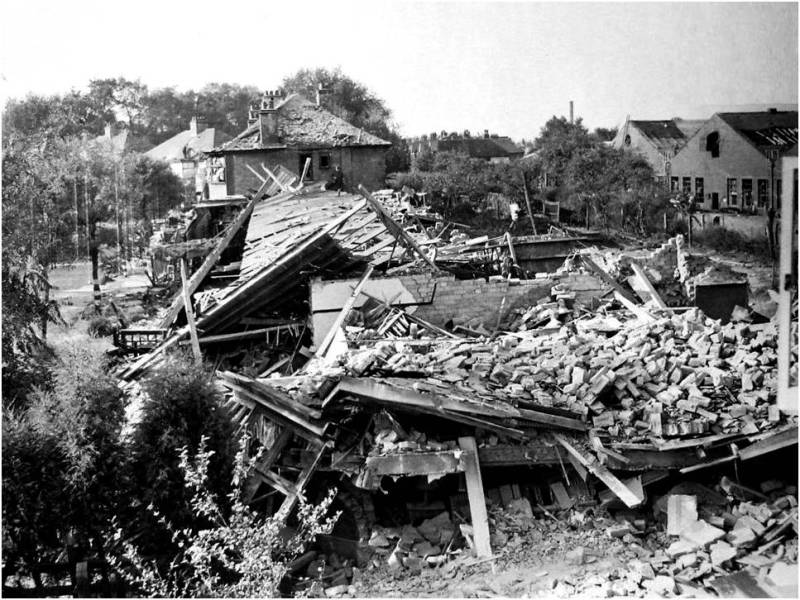 Some Ministry of Home Security files include photographs, like this one of bomb damage to houses in Kew in 1944. (Document reference: HO 192/862)

The National Archives holds bombing records created during the war by the Ministry of Home Security. As well as the Bomb Census maps (in record series HO 193), these include forms listing individual bombs (in HO 198) and files about selected incidents (in HO 192). Other relevant records include the reports on ‘key points’ such as utilities and some factories (in HO 201) and high-level reports (in HO 202 and HO 203).

For more information, take a look at our research guide about the Bomb Census. 5 Many of these records are fragile, so if you visit us to look at any of them, please handle them very carefully.

Sometimes, you can also find information relevant to bombing incidents in records of other government departments. Examples include:

Many other archives also hold relevant records. These vary quite a lot: in some cases, they can be more detailed than those held here at The National Archives but in other cases they are less informative. They may include ARP wardens’ logs or incident registers, as well as maps and photographs. Seemingly dry records such as local council minutes can be surprisingly informative, if you have the time to read through them.

Finally, some archives even hold more personal records, such as diaries of individuals who lived through air raids. These can offer a different, more intimate, perspective on events from the ‘official’ records of government departments and other organisations. 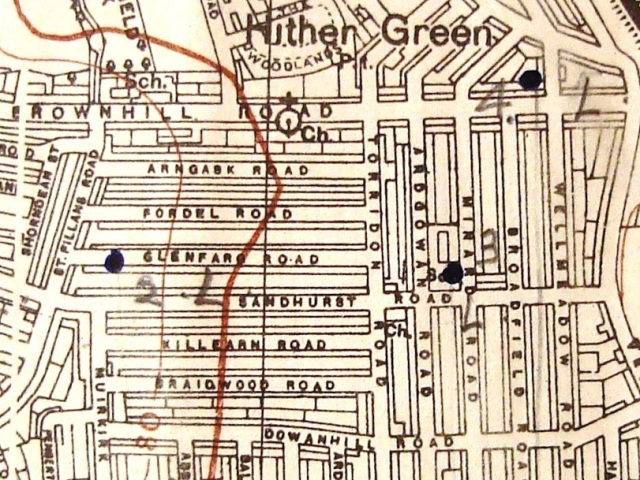