Records for over 12,000 servicemen from the Household Cavalry (file series ref: WO 400) spanning over 120 years from 1799-1920  have been made available online to view and download.The records contain details of servicemen (non-commissioned officers and other ranks) who were part of the Household Cavalry during the Battle of Waterloo, the Boer War and the First World War. They include their original handwritten enrolment form, a statement of names and addresses for next of kin and in some cases, a conduct sheet and casualty sheet, providing details of servicemen who fought in some of the British Empire’s biggest battles and wars.

People across the globe can now find personal details about troopers in the Household Cavalry such as their age when they joined, length of service, height, profession, pension and even any distinguishing marks they may have had. These details provide fascinating insights into the men that served in the Household Cavalry over the course of 200 years and are a fantastic resource for military and family historians to find out more about soldiers on horseback.

Love letters from the Front 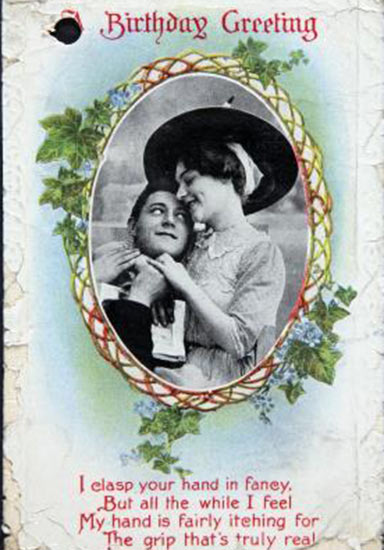 In rare cases, a record may contain personal correspondence and details of personal effects. This was the case for William Crawford (WO 400/289/2867) a 24 year old man from Inverkip, Scotland. He joined the Household Battalion and left Southampton for France on 23 October 1917 to fight in the First World War. He went into the field on 7 November 1917 and spent only a couple of months before he was wounded on 29 January 1918. He died of his wounds a few days later on 5 February 1918. His record lists only his uncle as next of kin and includes a letter from his uncle describing how at the age of 5 or 6, William was deserted by his father and his mother had died some time prior to that event. In the letter William’s uncle states that he “was the only father and friend he [William] really ever had” and asked for his medals and awards, along with his personal effects, to be presented to the King in memory of him. William’s personal effects were sent to the War Office and included correspondence from a woman named Hetty who had sent William a number of letters and a birthday card (images available here and podcast: Voices of the Armistice: with love from Hetty).

The records show the incredible lengths of service some of the Household Cavalry served with some serving in a number of battles and wars. Noah Phipps joined the First Life Guards in 1814. He served in Spain and at Battle of Waterloo and was discharged in 1841 “being completely worn out”. It is noted that he was an excellent soldier and received a pension on discharge from service.

Sergeant Major Thomas Playford joined the second Life Guards in 1810 age of 18. He served in Spain (Battle of Vitoria), France and in the Battle of Waterloo for a total of 25 years and was discharged from service in 1834. 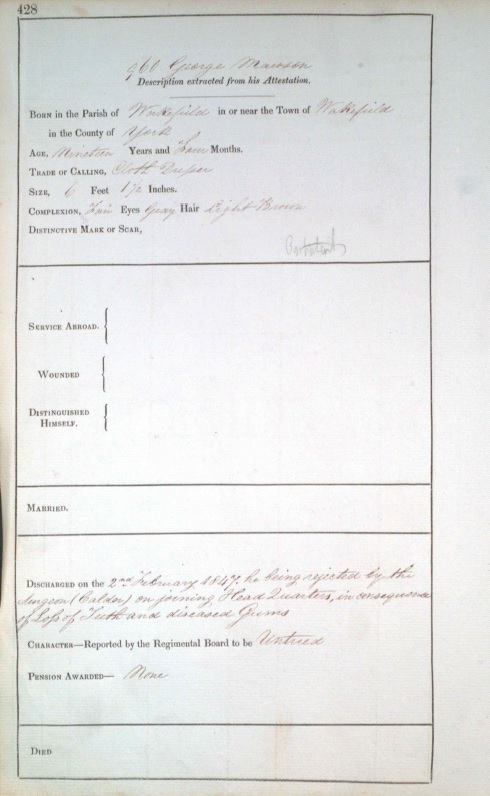 The files also contain the records for those that applied but didn’t make the grade. Such as George Mawson who was a cloth draper from Wakefield. He applied to join the 2nd Life Guards on 28 January 1847 age 19. Rejected by the surgeon for “loss of teeth and diseased gums.” (WO 400/74/960 – George Mawson)Service records also contain details about conduct during their service. Philip Milbourne who was a Labourer from Newcastle upon Tyne joined the Second Life Guards in 1839 at the age of 20 and served 5 years. During his service, he was punished with 40 days imprisonment with hard labour for breaking out of the barracks on Christmas Eve 1841 and returning at 10pm in a “state of intoxication” (WO 400/74/655 – Philip Milbourne).

Timeline of Major Battles involving the Household Cavalry from 1799-1920:

With original handwritten enrolment forms, statement of names and addresses for next of kin and in some cases, a conduct sheet and casualty sheet, providing details of servicemen who fought in some of the British Empire’s biggest battles and wars, this collection provide family historians with a wealth of information about the character and appearance of their ancestors.