Coffin handles and cricket belts: registered designs down under

It’s always interesting and often surprising to find out how our records are being used. Hilda Maclean, a PhD candidate at the University of Queensland, has crossed the world to look at registered designs held at The National Archives. This forms part of her research into coffin furniture (plaques, handles and other decorative items used on coffins) recovered from North Brisbane Burial Grounds. A huge sports stadium was built on the site, meaning that sections of it have had to be excavated and examined by archaeologists. Hilda has managed to match material found at the site with drawings submitted as part of the process of registering the designs for copyright, which are now kept at The National Archives. 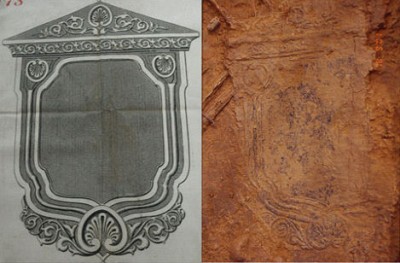 Left: BT 43/15/166773. Coffin plaque registered in October 1863 by John Hands, Birmingham. Right: an impression of the design found at the burial site (image courtesy of the University of Queensland Culture and Heritage Unit).

North Brisbane Burial Grounds were used from 1843 to 1875, by which time the cemetery was overgrown, overcrowded and causing sanitation problems similar to those caused by overcrowded Victorian cemeteries in Britain. The burial grounds were abandoned and replaced by Brisbane General Cemetery in 1875.

The old burial grounds lay undisturbed until 1910 when Lang Park, a sports ground, was built on the site. In 2003 Lang Park was transformed into a super-stadium known as the Suncorp Stadium, where rugby and football are played. A swanky new grandstand was planned, but this involved pile driving, which would disturb the graves that still lay beneath the sports ground. The University of Queensland was brought in to investigate the site. The building of the new grandstand affected 394 graves, which have now been excavated and moved to another site. The remaining graves – over 5,000 – have been left in place. As well as ensuring the dignified removal of remains, the excavation of the site has allowed researchers like Hilda to research burial practices and artefacts. 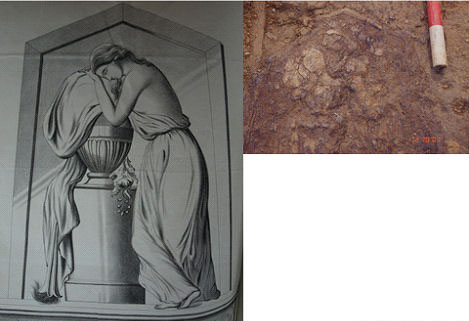 Hilda is particularly interested in the trade in coffin furniture between Birmingham, famous for its metalwork, and Brisbane. She explains: ‘In the mid-nineteenth century there was no coffin furniture trade in Australia – the nails for the coffins and all the coffin furniture was imported from Birmingham. At that stage raw materials such as zinc hadn’t been found in a location and sufficient quantity to make is suitable to mine in Australia. As the raw materials would have had to be imported anyway, it made sense to import the finished products.’

Before registration of designs was introduced in 1839, generic designs such as angels and flowerpots were made by several different manufacturers and used for over 150 years, making them unsuitable for archaeological dating. These generic designs tended to be used in cheaper, lower status burials. Registered designs are less common – the manufacturers copyrighted them because they had invested in creating individual designs and didn’t want them to be copied. Hilda explains: ‘Registered designs tend to be found in the higher class, more expensive burials and were marketed by undertakers as such. Registered designs give us more information about the deceased: for example, ecclesiastical designs inspired by the work of the designer A W N Pugin were favoured by members of the high Church of England, and designs featuring thistles or shamrocks indicate national origins. Registration gives us a date for the design, so we can establish that the burial cannot be before that date.’ Distinct changes of fashion in the designs can be noted over the decades, which also helps the dating process. 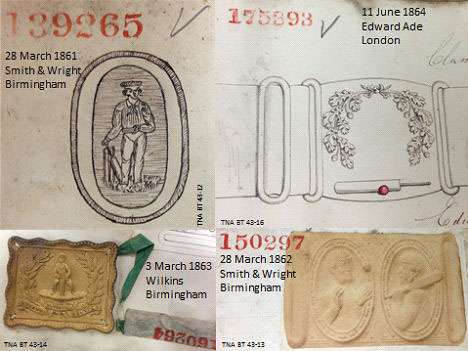 As well as coffin furniture, Hilda has found a number of belt buckles, two associated with burials, featuring cricketing themes, which seem to have been a craze for around 15 years from 1860 to 1875. Some of these are also registered designs, and she has been working to match them up with records at The National Archives. She explains: ‘People tended to be buried in their favourite clothes, or their Sunday best, so if they were especially keen on cricket, that would explain the cricketing belt buckles.’