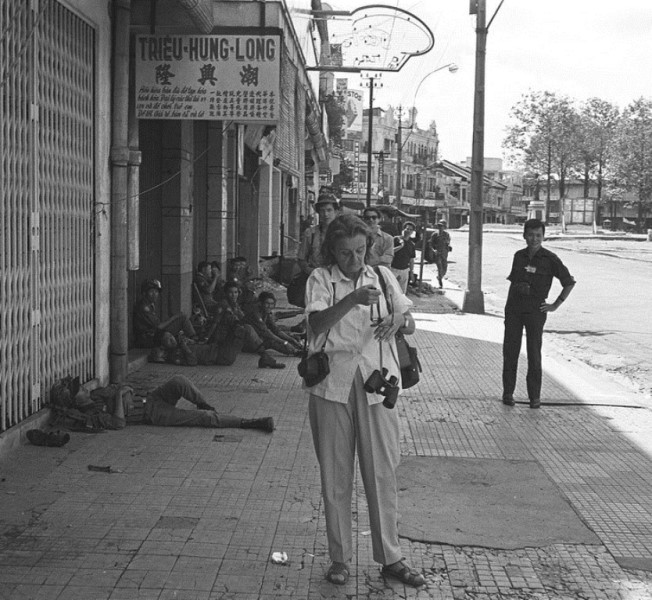 As you may have read, war correspondent Clare Hollingworth passed away, aged 105, on 10 January 2017. She is mostly remembered as the journalist who filed the scoop of the century: the beginning of the Second World War. She was also the first one to suggest that Kim Philby was ‘the third man’ in the Burgess-Maclean espionage case.

Given all the tributes paid to that formidable woman, I thought it would be interesting to see how her story, or at least some of it, was recorded in governmental files.

Clare Hollingworth first appeared on the Foreign Office’s radar in 1939, when she started working with Czechoslovak refugees in Poland as part of the British Committee for Refugees from Czechoslovakia.

Following the Munich Agreement, Germany annexed the Sudetenland – the German-speaking part of Czechoslovakia. On 15 March 1939, the Germans invaded the rest of the country, and hundreds of people crossed the Polish border. Clare Hollingworth arrived in Katowice, in southwestern Poland, on 22 March 1939, and promptly organised everything in a very efficient manner. As soon as she arrived, she found herself in charge of the maintenance, visas and evacuation of over a thousand refugees.

By April, the consul at Katowice, Thwaites, estimated that ‘the total of refugees amounted to over two thousand’. To cope with numbers, she had to resort to block visas, countersigned by the consul. To make things easier and ensure she could facilitate the evacuation of the largest number of people possible, Hollingworth also issued identity cards in lieu of passports (FO 371/24085). 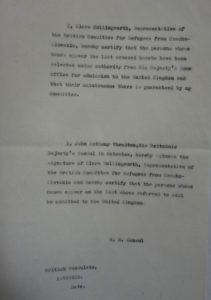 Example of a block visa signed by Clare Hollingworth and the consul (catalogue reference: FO 371/24085) 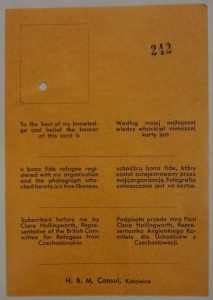 Clare Hollingworth managed to secure the help of the local authorities, who agreed to ‘support many refugees from public funds’. In London, however, she had ruffled a few feathers, and she was ordered to close her work down.

‘the procedure which has been adopted at Katowice both by the Consul at Katowice and Miss Hollingworth with regard to the granting of visas to Czech refugees as disclosed here has been entirely irregular and, in fact, subversive to the system of control which the Government decided should be exercised over the admission of these refugees to this country.’ (FO 371/24085) 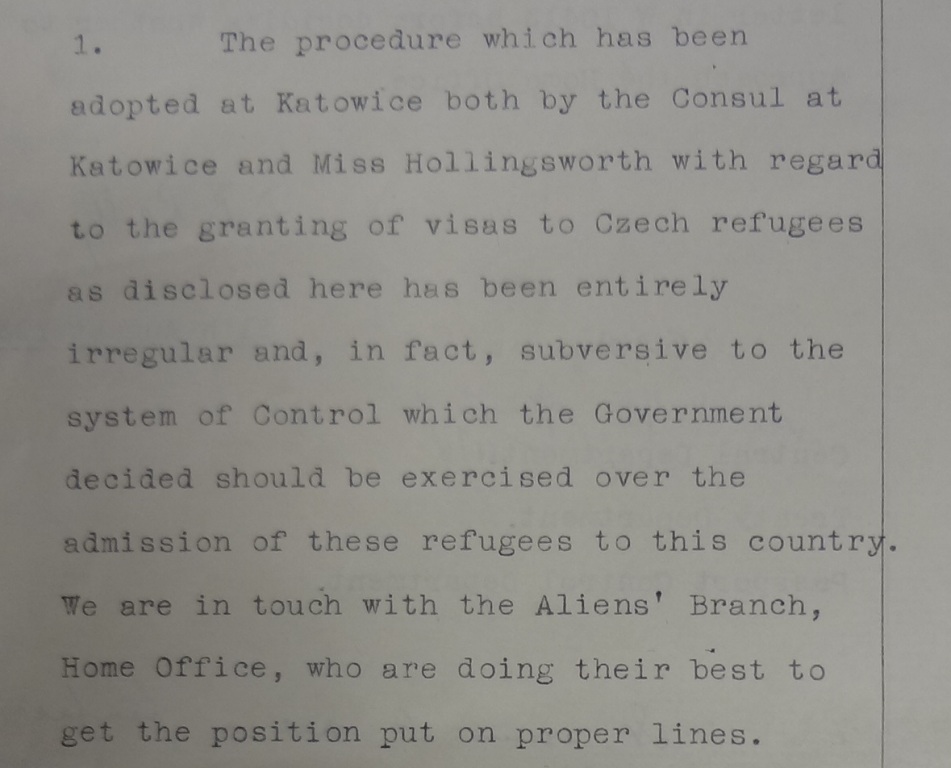 ‘Irregular’ and ‘subversive’, perhaps, but definitely efficient. According to Thwaites, ‘only constant intervention by Miss Hollingworth prevented large numbers of expulsions by the police and the breakdown of maintenance in Katowice and Cracow’ (FO 371/24085). By the first week of July, over 1,600 refugees from the Katowice district had been evacuated, above 2,000 from Poland as a whole. 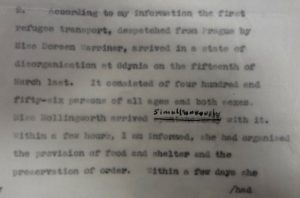 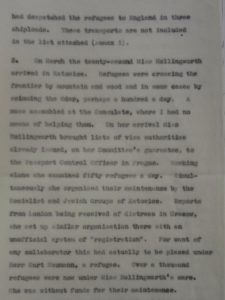 Hollingworth’s work was eventually shut down in July 1939, and she went back to journalism. Sent to Poland by the Daily Telegraph, she filed the scoop of the century in August: the beginning of the Second World War. Annoyingly, she isn’t credited for it in governmental records… However, the British ambassador did report that the information first came from Katowice (FO 371/23135). 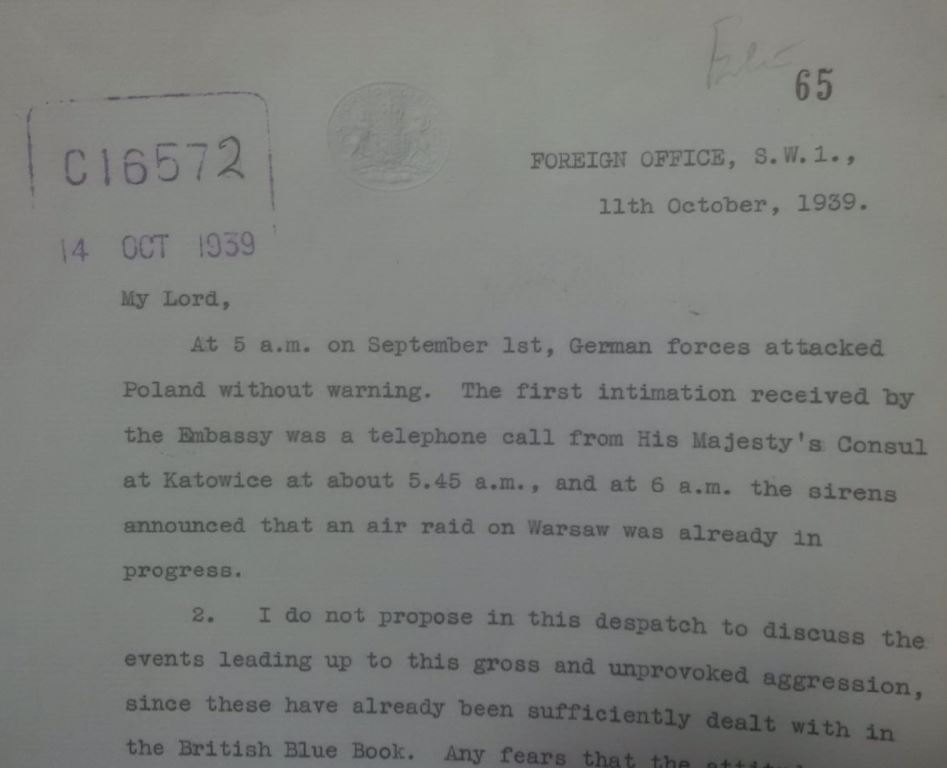 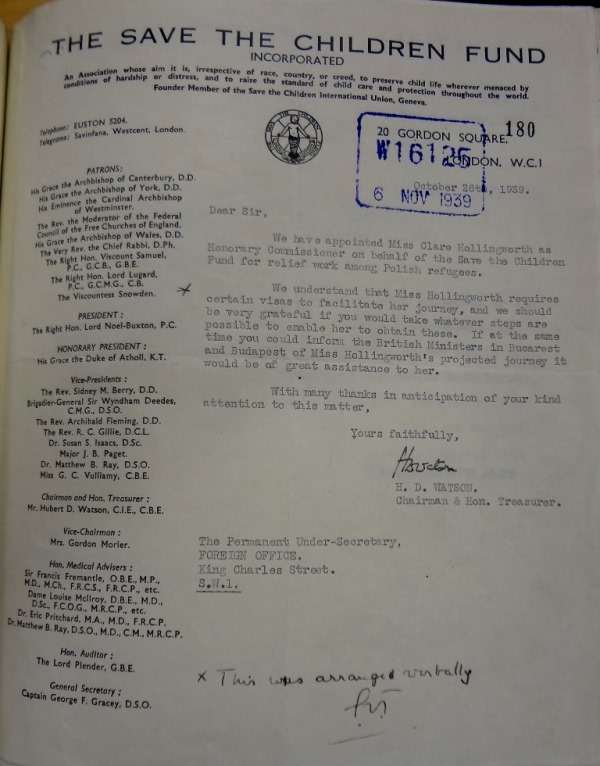 In October 1939, the Save the Children Fund wrote to the Foreign Office to inform them that Hollingworth had been appointed as Honorary Commissioner for relief work among Polish refugees. The chanceries in Budapest and Bucharest were instructed to help if needed (FO 371/24103).

In 1940-1941 Clare Hollingworth was working as a journalist, reporting from the Balkans. She first went to Romania from where she cheekily asked whether she could use the Foreign Office bag to send material back to Britain. The reply was expectedly negative, but very polite: ‘it does not appear that such permission could properly be granted in the case under consideration’ (FO 371/25107).

Robin Hooper, a third secretary at the Foreign Office, was slightly less diplomatic in his assessment:

‘Miss Hollingworth is a menace. She was at one time in charge of Czech refugee work on the Polish frontier. In this capacity she succeeded in breaking up the home of one of H.M. Vice-Consuls. She was later sacked from the “Save the Children” fund administration in Hungary for excessive self-advertisement. Consular Department and Refugees Section know all about her, and our Missions in S[outh] E[ast] Europe have been warned against her.’ (FO 371/25107)

Clearly not a fan. 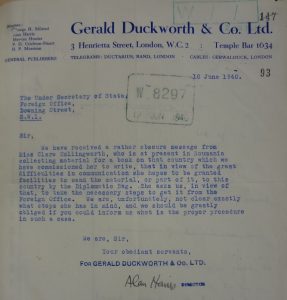 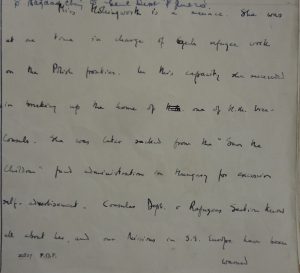 Later in the year, Clare Hollingworth was in Bulgaria. In November 1940, the Bulgarian Press Attaché in London reported that ‘the Daily Express had published a statement that its Balkan correspondent Miss Clare Hollingworth had, while driving across Bulgaria, been held up by German soldiers with Bulgarian officers’ (FO 371/24878).

At the time, Bulgaria was still neutral and Britain wanted to make sure it didn’t join Germany. Reporting that Bulgarian officers were assisting the German army wasn’t going to help. George Rendel, the Minister Plenipotentiary at Sofia, thought Hollingworth was ‘capable and reliable’, and had a chat with her while she was in Istanbul. She told him that ‘all she telegraphed was an apology for her delay in reaching Turkey and that she never mentioned German soldiers’ (FO 371/24878).

The News Department of the Foreign Office investigated, and reported that, according to the Daily Express, Hollingworth ‘did in fact send the message as printed, including the story of her being held up by German soldiers’. Unimpressed, Clutton, of the Southern Department, commented: ‘It is quite clear that either Miss Hollingworth has forgotten what she cabled or else the daily Expressed have cooked her cable, Whichever the case it is highly unsatisfactory’ (FO 371/24878).

On 16 November, Randall, a councillor in the Foreign Office, reported that Hollingworth had ‘now been turned out of Bulgaria on a charge, I believe, of spreading atrocity stories!’ (FO 371/24878)

In 1941, Clare Hollingworth was in Romania, still reporting on the situation in Bulgaria. On 1 February, Rendel warned there was ‘reason to believe that Miss Hollingworth may be sending dangerous and misleading messages from Bucharest about the situation in this and other Balkan countries’. He suggested her reports should be ‘carefully watched’ (FO 371/29734).

On 8 February, he wrote again, saying that Hollingworth had sent a ‘sensational and inaccurate message’ from Bucharest stating: ‘German soldiers in uniform continue to creep into Bulgaria’. The message also referred to ‘new aerodromes which the German plain clothes soldiers have been building since September’. Rendel urged the Foreign Office to intervene in order ‘to prevent further mischief of this kind’. This letter shows how desperate he was – and how unstable the situation in Bulgaria was. He added: ‘Situation here is already sufficiently difficult and it is insufferable that it should be further complicated by such irresponsible activities’. Decidedly not impressed, Clutton, of the Southern Department, commented: ‘Miss Hollingworth is a menace’ (FO 371/29734).

The Foreign Office warned the Daily Express that they shouldn’t use Hollingworth’s ‘exaggerated reports’. Yet, Clare Hollingworth was right. An intelligence report dated 22 January 1941, stated: ‘German airmen and technicians have arrived at Philippopolis to instruct Bulgarians in the use of planes supplied by Germany’. Another one, dated 14 February 1941, confirmed: ‘within the last few days 6,000 Germans have arrived in Bulgaria. They are stated to be organizing civil defensive works against air attack’ (WO 208/4376). Bulgaria joined the Axis Powers on 1 March 1941. 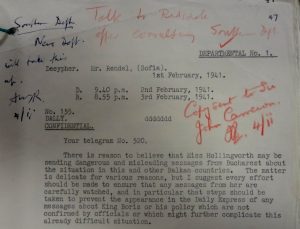 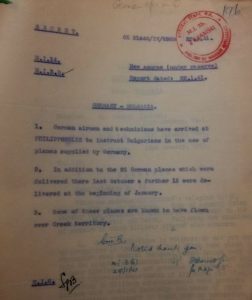 Hollingworth kept on writing – and annoying the Foreign Office. Frustratingly, none of these documents have been preserved, but there are tantalising references to her books in Foreign Office indexes. One of the entries for 1941 reads: ‘censorship of book on the Balkans written by [Clare Hollingworth], containing derogatory references to personnel of British diplomatic service’ (FO 409/77/4); another, for 1942, reads: ‘passages in book There’s a German Just Behind Me: reflections on conduct of HM Ministers at Budapest and Athens: Question of taking action for libel’ (FO 409/81/4).

Clare Hollingworth then reappears in the records in 1963, when she was working for the Guardian. On 23 January 1963, Kim Philby, the correspondent for the Observer and the Economist in Beirut, failed to turn up at a dinner party. On the following day, his wife turned to the embassy for help. On 26 January, she received a message stating he was off on a tour. On 2 February, she told the embassy she had received a telegram from him, sent from Cairo. Sir Moore Crosthwaite, the ambassador at Beirut, thought it best not to inform his employers and added: ‘the press can be so very touchy’ (FO 953/2165).

Philby had been closely connected to the Burgess/Maclean espionage case and had been forced to resign from the Foreign Office in 1951. Naturally, foreign correspondents soon started asking questions. On 27 February, Crosthwaite reported:

‘Yesterday, Clare Hollingworth of the “Guardian”, who had stopped here on her way from Paris to the Yemen, called on the Counsellor, whom she has known for many years (…). She told him that Mrs. Maclean had shown her at the time certain communications she had received from her husband after his defection, and drew parallel with the information Mrs. Philby had given about communications from Philby since his disappearance. She strongly implied that he too might have defected.’

He also warned that she had been talking to other journalists and that several stories had already been filed, ‘linking Philby’s disappearance with the Burgess/Maclean case’ (FO 953/2165). 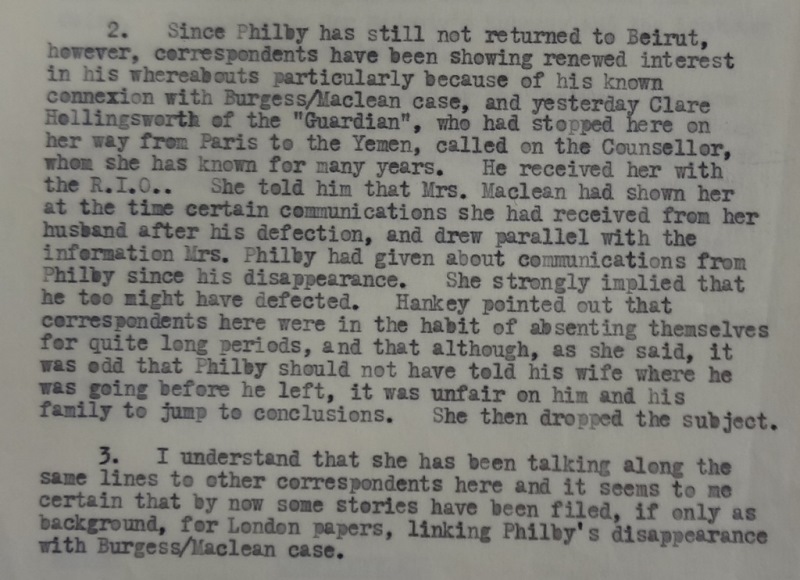 It turned out Philby had never entered Egypt. On 1 March, Mrs Philby received another telegram stating that ‘all was well’. The Egyptian authorities confirmed it had been sent from Cairo ‘by a person who signed himself H. Philby and gave the Cosmopolitan Hotel as his address’. The Egyptians also confirmed that ‘no-one of that name was registered at the Cosmopolitan at the time’ (FO 953/2165).

In the meantime, in London, everybody was getting seriously worried and contingency plans were made very early on. On 18 February, Hugh Stephenson, a Deputy Undersecretary at the Foreign Office, stated:

‘although it is conceivable that the whole business will drop out of sight and be forgotten, it appears more probable that the story of the disappearance will eventually break if he does not turn up and it is inevitable that Philby’s name will be connected with the disappearance of Burgess and Maclean.’ (PREM 11/4457)

By May 1963, it was quite clear Philby had defected and was behind the Iron Curtain.

So, once again, Clare Hollingworth was right. In the light of this, and of the hundreds of stories she filed from anywhere a conflict was raging, we can conclude that, to quote the British Ambassador to Poland during the Second World War, she was indeed ‘a clever English journalist’ (FO 371/24474).