Why recruit the Chinese Labour Corps?

As the First World War progressed, the need for more manpower became acutely problematic. The increased use of ammunition and supplies necessitated by trench warfare led to increased imports, which in turn put enormous strain on the transportation services. Depots, workshops, factories and ports were all desperate for manpower. At the start of the war in August 1914, there was no body of men trained or designated for these tasks. The British War Office had to put forward its troops for manual work near the front lines in the form of Pioneer Battalions, which were added to each Division.

It was the realisation of this huge task that would be necessary to prepare for the great offensive of 1917 that first persuaded the British Authorities to consider the importation of Chinese labourers to France and Belgium. The tremendous losses seen during the series of British offensives of 1915 meant that labourers who previously worked behind the front line were now required to go to the front.

By August 1916 the War Office had made an enquiry to Sir John Jordan, British Minister in Peking, for his view regarding the prospect of employing Chinese labour. The scheme was given the go-ahead and by 3 September 1916, the War Office had appointed Mr T. J. Bourne – Engineering Chief of the Pukow- Hsinyangchou Railway –  as a representative and recruiter. At first, the scheme was to recruit labourers from British Territory in Hong Kong to avoid difficulties regarding China’s neutrality. However, it became clear that labourers from Hong Kong were not suited to the cold climate, as stated by Military Attaché’ Robertson:

‘…the men would be Cantonese and Cantonese are not accustomed to a cold climate. This might be sufficient to prevent the scheme being carried out.’

As the recruitment in Hong Kong was not recommended, the Military Attaché presented two alternatives. The first was to enlist Chinese labourers under private contractors as the French did. Once recruited, the labourers would be shipped from the treaty ports (i.e. ports that were open to foreign trade and residence). This method would be carried out under Liang Shih Yi, Director-General of the Customs Administration. The second option was the enrolment by the British Government of Chinese labourers in Wei-Hai-Wei, a British-leased territory. The War Office – after consultation with Sir John Jordan and the Foreign Office – approved the latter method and by the beginning of October 1916 recruiting agent Forbes and Co., who ran the scheme that recruited Chinese labourers to South African gold mines in 1904, was appointed.

The French pioneered the scheme to recruit labourers to serve as non-military personnel, with negotiations being conducted by government officers posing as civilians to protect the Chinese Government and its neutrality. The contract to supply 50,000 labourers was agreed upon on 14 May 1916 and their first shipment left Tianjin for Marseilles in July 1916.

With regard to British plans following the negotiations with Beijing, the Government and the War Office made the initial decision to use Wei-Hai-Wei as a recruiting depot. This was a result of a compromise between the urgent need for the manpower and a strict legality regarding the politics and diplomacy of China. On arrival at the Labour Depot at Wei-Hai-Wei, the prospective recruits were given accommodation and food by Forbes and Co..

Each recruit was allotted a number and given a brass disc for identity. In order to become a member of the CLC, the recruit needed to pass medical inspection. They then received a uniform and equipment. The Wei-Hai-Wei depot allowed the British to recruit without restriction and by January 1917 the first Battalion of the CLC was ready to sail. At the same time, the War Office appointed Lt. Col. Bryan Charles Fairfax and Major Richard Ireland Purdon to organise the headquarters of the CLC and the Chinese Depot, as well as the Native Hospital at Noyelles sur Mer near Abbeville. 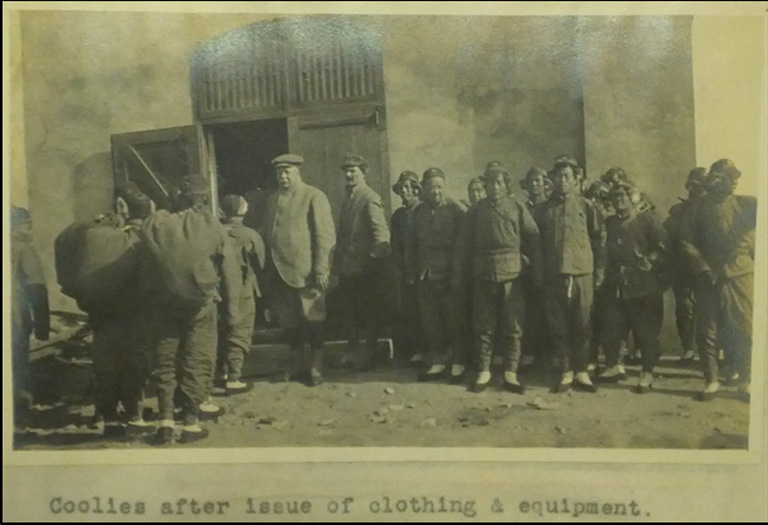 The first contingent of Chinese labourers (1086 under six British officers and one Medical Officer) left Wei-Hai-Wei on 18 January 1917, on the Teucer. The route took them via Yokohama, Singapore, Durban and Cape Town, arriving at Havre on 19 April 1917. However, during transportation there was evidence of defiance of authority from some, as show in the ships’ official logs; four of the Chinese labourers were detained for subordination and inciting a mutiny.

After Germany’s resumption of unrestricted submarine warfare on 1 February 1917 – followed shortly after by the sinking of the Athos, causing the loss of over 500 of the French-recruited Chinese labourers – the British sought to minimise the risk by reducing the time their own recruits would spend at sea. In March 1917, the Colonial Office approached the Canadian authorities for assistance. The plan was to transport the labourers from Wei-Hai-Wei to Canada and land at William Head in Vancouver Island, where they would be held at the old quarantine station. The voyagers’ conditions were varied –  some crossings could be extremely rough and many of the labourers were not used to travelling on water – the official log of the Empress of Asia records deaths during the transit, including that of Ching Chin Kuei, who died from an obstruction of the bowel and was buried at sea.

Following authorisation from the quarantine station, the labourers  boarded the train provided by Canadian Pacific Railway Company to Halifax, Nova Scotia. During this land journey, the Canadian government banned all news outlets from reporting on the train convoys that crossed the country on their way to France. Once at Halifax, the Chinese labourers would be shipped to Liverpool or Plymouth in the UK, then from Folkestone on to Noyellessur-Mer in France. 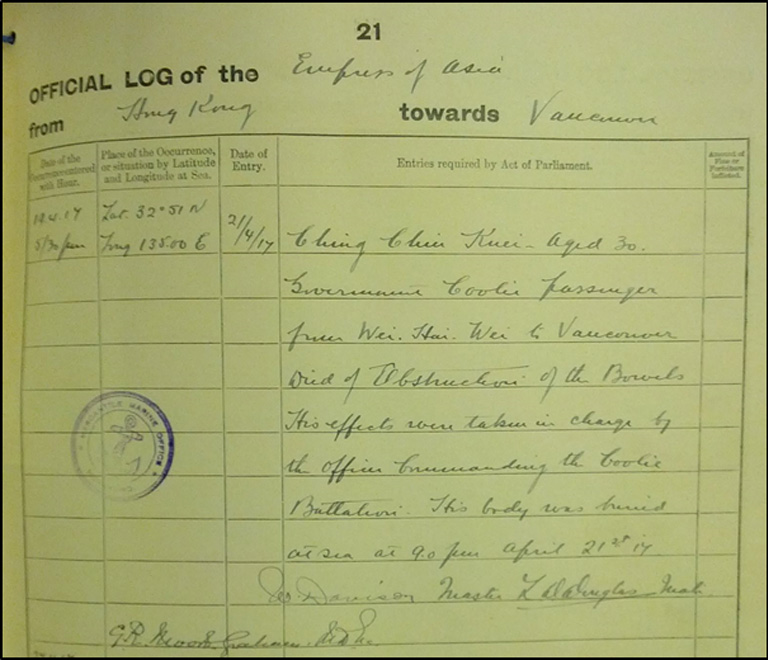 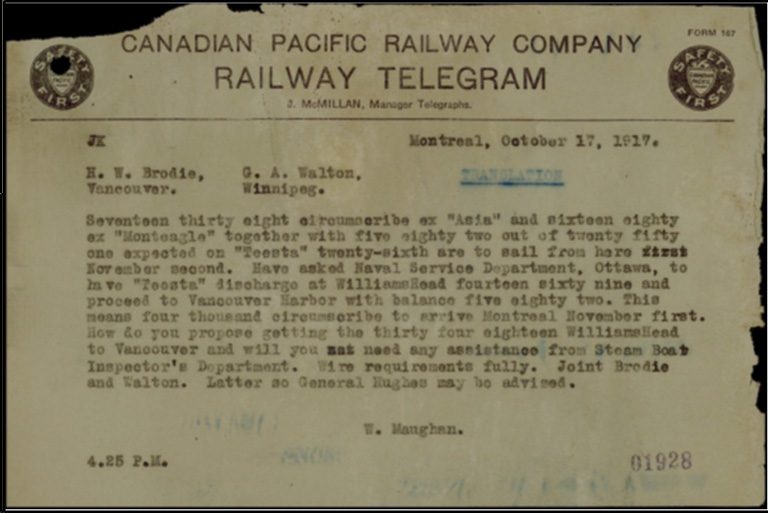 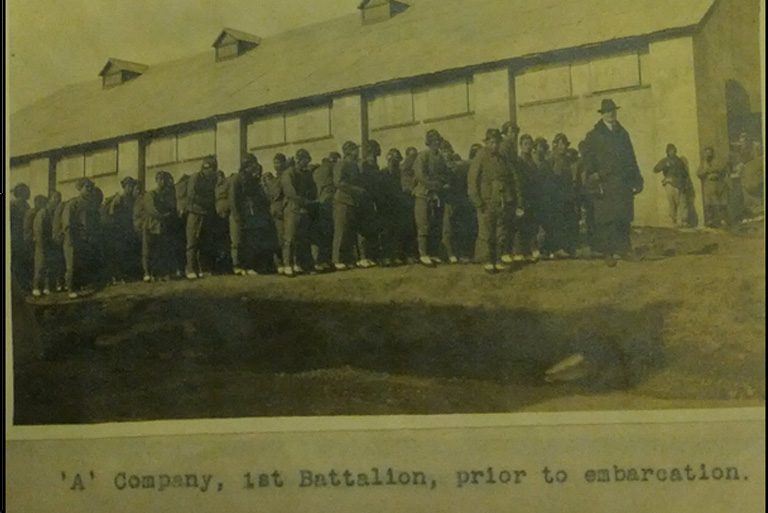 The plan to raise Chinese labour units was initially proposed by the War Office for a target of ten thousand labourers, or about 20 companies, which was set out by the Secretary of State for the Colonies, Andrew Bonar Law. The distribution of these Chinese labour companies was first done by DGMR (Director-General Movements and Railways), under the DGT (Director-General of Transportations) Sir Eric Geddes. But the QMG (Quartermaster General) decided that it was impracticable to hand these Chinese over for administration as well as all work under DGT. Therefore 14 of these first 20 CLCs were to work under DGT. Of these, the 1st , 4th and 6th companies were to work under CEPC (Chief Engineer Port Construction) for Port construction, consisting of men of suitable trades or easy to train for this sort of work. The 2nd, 3rd, 5th and 7th companies worked under CSKP on Transportation and Stores. Then seven CLC companies were employed in the Labour Pool at the Northern ports for work under the Department of Docks. The remaining six companies were distributed to Armies and Line of Communication. A typical CLC consisted of a headquarters and four platoons each under a subaltern. Each platoon consisted of two sections, each under a sergeant. Each section consisted of two subsections, each under a corporal. There were between 470 and 490 Chinese, which included 32 gangers of classes 1, 2 and 3 in each company. By the end of the hostility in 1918, there were about 195 Chinese Labour companies in all (approximately 95,500 Chinese labourers). The tables below represent a common distribution of labour battalions and companies (Table 1) and distribution by employments and formations (Table 2) for the situation on 27 July 1918. 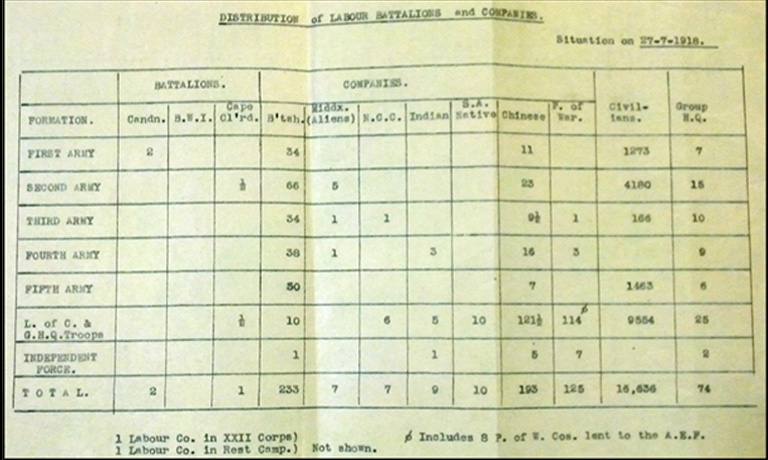 Table 1: Distribution of Labour Battalions and Companies (catalogue reference: WO 107/37) 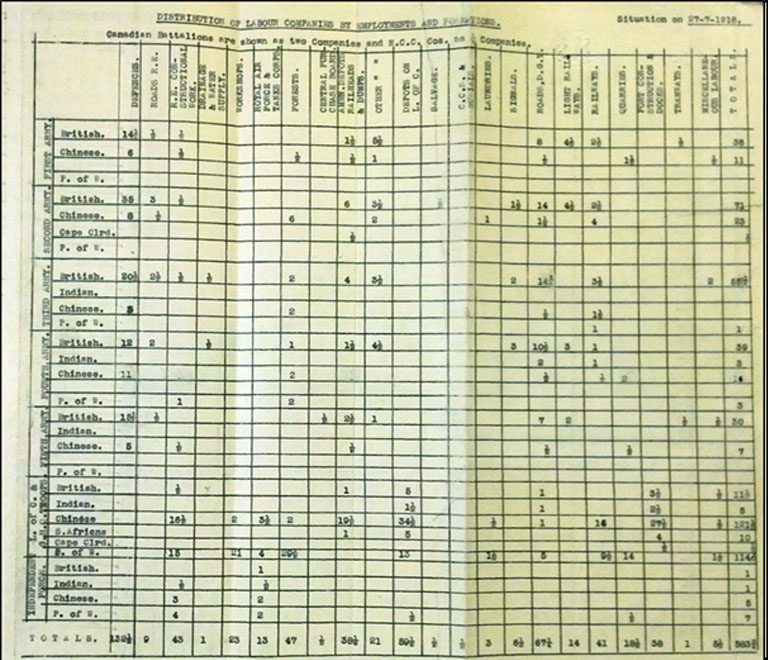 Table 2: Distribution of Labour Companies by Employments and Formations (catalogue reference: WO 107/37)

As Chinese labourers started to arrive at the Western Front, there were no special arrangements in regard to “skilled” companies. However, a census was made of the trades of everyone passing through the depot, based on an oral examination. There was no regulation with regard to the tradesmen, and no special demands for skilled labour had been received. Around May 1917, the decision to regularise the position of Chinese skilled labourers and tradesmen was taken at Conference at HQ CLC at Noyelles. Special rates of pay were proposed for these skilled labourers and agreed by the War Office by the end of August 1917. 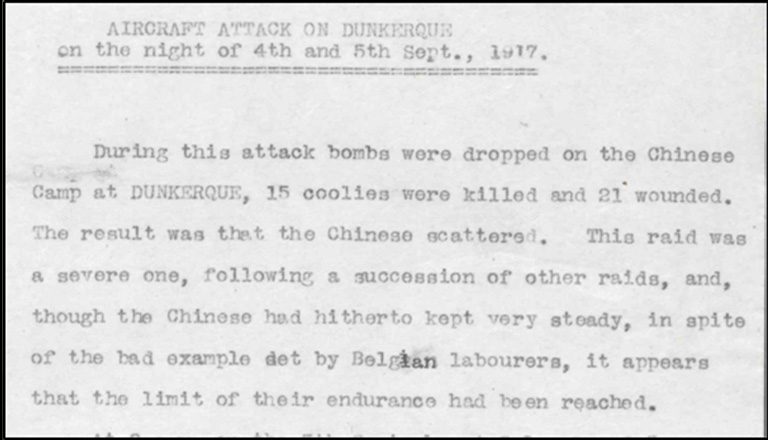 During the Flanders Offensive in 1917, many Chinese labour companies replaced the British labour companies, who were sent from the Line of Communication from the Southern to the Northern Armies area (which at this time were occupied by the Second and the Fifth Armies). Between 4 and 5 August 1917, Dunkirk suffered enemy air raids which resulted in 12 Chinese labourers being killed and 32 wounded. These air raids caused panic and led to the dislocation of Chinese labour corps, as shown in the Labour Commandant’s war diary.

With the United States’ entry into the war in April 1917, Britain and France needed to transport American troops, not Chinese labourers. China abandoned its neutrality and declared war on Germany and Austria-Hungary in August, eager to have a seat in post-war negotiations. Russia quit the war as the Tsarist empire crumbled in the world’s first Communist revolution in October 1917, stranding hundreds of thousands of Chinese workers in the former empire. Ten days before Germany’s surrender on November 11, 1918, Britain sent back the first batch of 365 Chinese workers, beginning repatriations that ended in September 1920. By the end of the war, the Chinese had already begun to form an established community in France. The republic had workers stay to help rebuild after the fighting. About 3,000 Chinese labourers remained in France and settled down, forming Chinatowns.