The Centenary of the Quintinshill Rail Disaster

One hundred years ago, on 22 May 1915, the UK witnessed its worst ever rail crash at Quintinshill, near Gretna Green, when 5 trains were involved in a collision on the Caledonian Railway resulting in a huge fire and over 220 deaths, with a further 240 people injured. 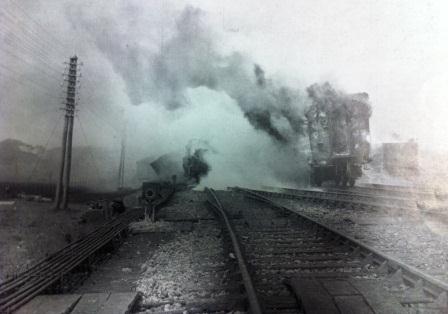 Most of the victims were soldiers from the 1/7th Battalion, the Royal Scots, travelling from Larbert on their way to the front to fight for their country in the First World War. The precise number of dead is disputed because the roll of the regiment was destroyed in the fire, a fire so intense that 82 bodies were unidentifiable.

One of the causes of the crash can be attributed to the poor working practices of the two signalmen working on this line. James Tinsley was due to start his day shift at 6am, but was in the habit of using the local train to reach Quintinshill, saving him a 1.5 mile walk. This meant however that he would arrive 30 minutes late for his shift. George Meakin, working the night shift, would cover for him by writing down train movements on a piece of paper which Tinsley would later copy into the train register as if he had been there all along. 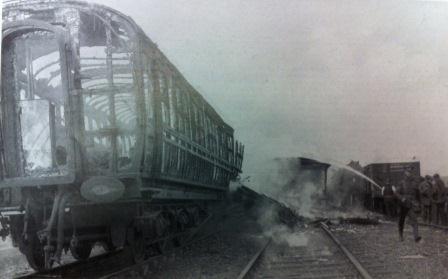 On this particular morning the goods loop was occupied by a Goods Train, so the local train on which Tinsley arrived was shunted onto the main up line, out of the way of an express train from Carlisle, expected at 6:50am. While in the junction box Tinsley and Meakin, discussed the war with two brakesmen and the driver of the local train, and Tinsley copied Meakin’s notes into the train register.

It was these distractions that caused them to send incorrect signals to the previous signal box at Kirkpatrick, giving the impression that the line was clear. They all forgot about the stationary train on the up line. Kirkpatrick signal box therefore send through the troop train carrying 500 soldiers, along the same line as that on which the local train was resting. At 6:49am the troop train collided head on with the local train right in front of Quintinshill signal box, spreading wreckage over both lines, and into the path of the express train from Carlisle, which smashed into the crash scene one minute later.

Fire immediately took hold, fuelled by coal from the overturned tenders. Gas carried under the vehicles, used for illuminating the carriages, caused further explosions. The broken wooden rolling stock burned with such intensity that the fire was still burning the following morning. The goods train and the empty coal wagons held in the loop lines were also burned in the fire. It is said that more people died in the fire than from the initial crash. The death return for the Driver of the troop train, Francis William Scott, can be seen below (TNA: MT6/2423/11). 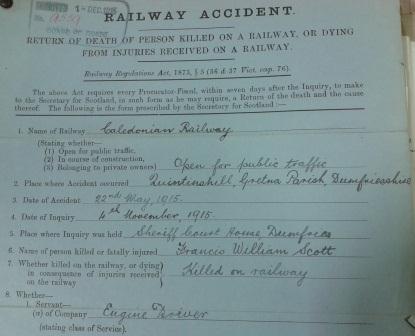 A Board of Trade enquiry into the crash (TNA: RAIL 1053/104/10) laid most of the blame on the shoulders of Tinsley and Meakin, and the subsequent trial found both men guilty of culpable homicide. Tinsley received a three year prison sentence and Meakin was sentenced to 18 months. They were both released after serving one year.

To me, one interesting aspect of this event is the support given to Tinsley and Meakin by their colleagues and those who worked in the railway industry. Admittedly the men had lapsed into sloppy work practices, and the crash would not have occurred had they performed their duties correctly. But these two ordinary railwaymen, who worked on a quiet backwater of the railway network, were suddenly thrown into the public spotlight, with the deaths of over 200 men on their consciences, and their mistakes and shortcomings were laid bare for all to see. Were they any worse than other railwaymen who no doubt cut corners and found ways to cope with repetitive routines?

The National Union of Railwaymen sent several letters to the government during 1915 on behalf of different railway companies seeking the release from prison of the two men, and in one letter blamed the Caledonian Railway company for not introducing ‘Electric Tracking’ which would have prevented the accident. The Board of Trade replied that they could not interfere in the justice system.

The Railway Gazette of 4 June 1915 made the point that during the 12½ years from July 1896 to December 1908 there were 30 similar occurrences, where signalmen had forgotten that vehicles were on the line and lowered signals for other trains to come through, causing accidents, but there had been no prosecutions in those cases.

The Railway Review of 1 October 1915 carried an article which said that:

‘When everything has been made to look its worst and blackest, – the lapse in the working, the falsification of the times of signing on duty and off, the sacrifice of life, the suffering, the loss – there is something in the [prison] sentences which to railwaymen at all events looks not unlike revenge rather than justice.’ 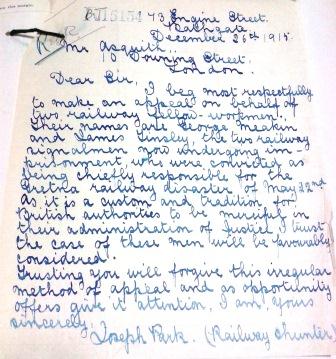 Letter from Joseph Park to the Prime Minister.

We even have the letter which Joseph Park, a lowly railway shunter, sent to 10 Downing Street in December 1915, reminding the Prime Minister that it is ‘a custom and tradition for British authorities to be merciful in their administration of justice’ and trusting that the case of these men will be considered favourably.

A plaque can be seen on the wall of Larbert Railway Station in memory of the First World War soldiers of the Royal Scots who died in the disaster, and whose last steps on earth were taken, not in the muddy hell of the trenches, but on a small railway station platform near Falkirk in the early dawn of a spring morning.