Just over a year ago the 1940 census of the United States was released, causing much excitement and activity in the genealogical community there. Unlike recent census releases in the UK, it did not arrive fully indexed, but as soon as the census images were made public a massive crowd-sourcing project got underway to create name indexes. This is no mean feat since that census contains over 132 million names. The project was jointly undertaken by FamilySearch and by two commercial companies, findmypast.com and Archives.com with batches being allocated to volunteer transcribers and moderators using FamilySearch indexing software. The enthusiasm of the volunteers exceeded expectations, and the whole project was completed ahead of schedule within a few months. Quite independently of this, two other companies, Ancestry.com and MyHeritage.com, also compiled their own indexes.

I indexed a few batches myself, because I thought it was a worthwhile project, but also because I have an interest in American records. My own ancestry is all Scottish and Irish so far, but learning about American records is useful to me because I keep finding distant relatives whose families migrated there in the 19th and 20th centuries, and I have an American daughter-in-law. It’s also relevant to the day job, since many Americans have British or Irish roots, and when I am answering their research enquiries on British records it helps to know a little about the kind of records they are used to.

Nationwide or federal censuses have been taken in the USA every ten years since 1790. In Great Britain there has been a census every ten years since 1801, with the exception of 1941, and in Ireland every ten years from 1821 to 1911. There was no Irish census in 1921 because of the Troubles, but a census was taken in 1926 in both the Irish Free State and Northern Ireland. There is a lot more US census to look at, and not just because it is a much bigger country. There are lists of names all the way back to 1790, albeit names of heads of households only before 1850, while in Great Britain no name lists at all were collected centrally until 1841 (although some lists from 1801 to 1831 do survive in local archives). But there is also a great deal of extra census material in the USA, including state censuses, often taken half-way between the federal censuses. There are also ‘Non-population’ returns for some years, recording details about agriculture and manufacturing.

Superficially, censuses in the USA and the British Isles are quite similar, in that they list individuals by name, with details of age, occupation and birthplace, and varying amounts of other information depending on the census year. There are, however, some significant differences too; not every individual was listed in every US census, only free people were listed by name, so it was not until 1870, the first census after the Civil War, that all formerly enslaved people were properly listed. Every US census also asked about a person’s ‘Race or color’, while there are no questions about ethnic origin in any British census until 2001. Birthplace information in a US census can be simultaneously more helpful and less helpful than in a British one; in the US census you will only ever find the state or country of birth, not the town or even the county, but as a bonus you will often get the country or state of birth of each person’s parents. In some years the year of arrival in the US is recorded, also if and when a person was naturalised. This information is like gold dust to American genealogists who are looking for the origins of their immigrant ancestors. You might also find information about property, and even earnings, which is never included in Britain

But perhaps the greatest difference is one which is not immediately apparent: the way that the census was taken in the first place. In Britain the enumerator left a paper (schedule) for every household to fill in, which was later collected and the details copied into an enumeration book, except for 1911 in England and Wales when the schedules were kept instead, and the statistical information extracted directly from them. In America there were census takers who gathered information from each household and wrote up the answers. In both countries the census returns were microfilmed (except for 1911 in England and Wales when scans were made directly from the paper schedules). Although all censuses held here at The National Archives are now viewed online, we still have the films as a back-up, and in rare cases we can even refer to the paper originals, which are mostly stored off-site, if a query cannot be resolved using the online or film versions. When I asked about the original paper versions of the US censuses, I was told by a respected genealogist there that the National Archives (NARA) in Washington only held the film versions. If this is true, that is a shame, although you can appreciate the storage problems that would be involved in storing that amount of paper. Despite the fundamentally different ways in which the census was taken on each side of the Atlantic, we in the UK did take the lead from the US in adopting a machine method of tabulating the census. It was first used there in 1890, and was adopted here in 1911 using Hollerith machines and punch cards that were remarkably similar to those I used when I started work in the 1970s!

American censuses are opened after 72 years, while in the UK and Ireland it is something like 100 years. I use the term ‘something like’ advisedly because there have been numerous exceptions; the 1841 and 1851 censuses for England and Wales were first released in the 1920s, thanks to the lobbying efforts of the Society of Genealogists, and in Ireland the censuses of 1901 and 1911 were released well before time, as a kind of consolation prize for the destruction of most of the 19th century returns. This led to the anomalous situation for several years where censuses for Northern Ireland were available to view in the National Archives in Dublin, but not in the Public Record Office of Northern Ireland in Belfast. When I started my own family history research in the 1980s the Scottish 1891 census was already open, but I had to wait until January 1992 to see the returns for England, Wales, the Channel Islands and the Isle of Man. More recently, as the result of a challenge under the Freedom of Information Act, it was England and Wales’ turn to have a census opened earlier than scheduled, when the phased release of the 1911 census began in January 2009, instead of January 2012. The Scottish Freedom of Information Act was worded differently, so the 100-year rule had to be observed, but as a concession the 1911 census for Scotland was released in April 2011, exactly 100 years after it was taken, rather than the customary January of the following year. And recently the government of the Republic of Ireland has agreed to the early release of its 1926 census.

There are ‘missing’ censuses on both sides of the Atlantic, notably the 1890 census of the USA, and most pre-1901 Irish returns. The effects of missing censuses on the British mainland are yet to be felt, since the major loss was the 1931 census for England and Wales, Channel Islands, Isle of Man etc. which was destroyed by fire during the Second World War. The Scottish census, which was administered and stored in Scotland, was not affected. The census of 1941 was never taken, because of the war, although a kind of census was taken in September 1939 for National Registration. 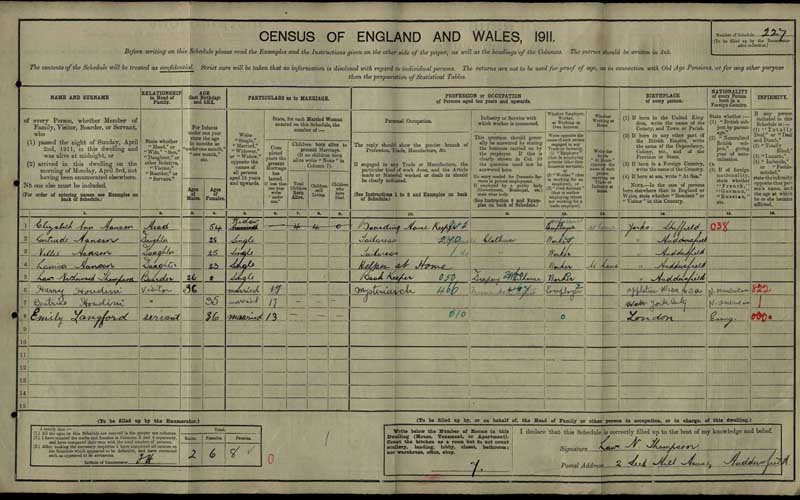