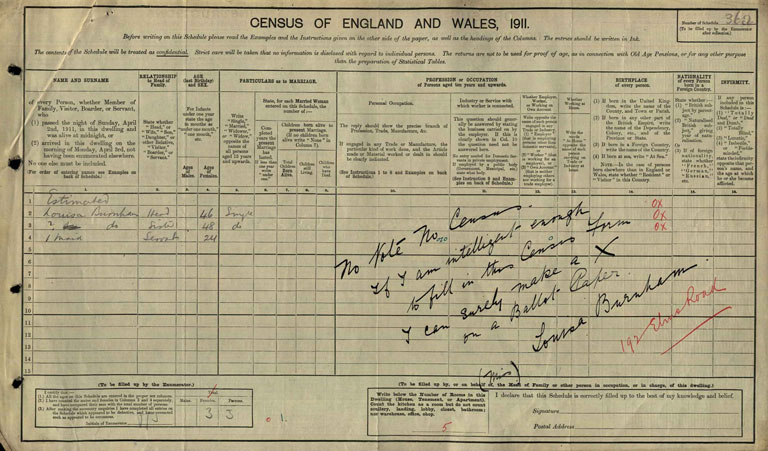 This record also inspired one of winning entries in the Files on Film competition:

Jessamy said: ‘Protests in favour of women’s suffrage were many and varied, but the recording of these small acts of refusal to conform cheer me, in a strange sort of way. The right to vote has been widened so extensively since this census was taken, but I am reminded of the fight by so many people for that vote whenever I look at material like this.’

Suffrage proved a popular theme. Melinda Haunton, Accreditation programme manager nominated CAB 27/336  the records of the Cabinet Committee considering the granting of an equal franchise to women in the UK (which led to the Equal Franchise Act, 1928). Melinda said ‘It’s partly an emotional connection to the subject matter. Not only did the Act ultimately enfranchise me, for my first opportunity to vote in a general election; but as far as I know this is the first time an Act relating to women’s rights included the term ‘equal’. The right for women to sit as MPs, for example, was phrased as the Sex Disqualification (Removal) Act 1919, which isn’t quite as egalitarian.

‘The other intriguing aspect of the Committee is the analysis it undertook – and the fear that demonstrated – about the impact of equalising the franchise. An equal franchise would not only cover women under 30, but also a large group of women over 30 who were not property-owners nor married to property-owners. The Committee considered a number of ways they could mitigate the impact of a previous verbal commitment by the Home Secretary to offer an equal franchise to men and women within the lifespan of that parliament. These included raising the voting age for men from 21 to 23 or even 25, or allowing all those over 30 to have two votes so that the young person’s vote would not have too much impact. The Committee also analysed the effect on individual constituencies, and noted with concern that some of the richest areas would have a major increase in women voters, as previously disenfranchised women servants would all get the vote. It’s a fascinating document, all round’.

Vicky Iglikowski, Diverse Histories record specialist nominated HO 45/24665, a list of suffrage campaigners on the eve of the First World War. Vicky said: ‘On the outbreak of war in August 1914, some of the key suffrage societies declared a suspension to militant tactics and in response the government granted an amnesty to all suffrage prisoners.

This document is a Home Office list of all suffrage campaigners granted amnesty. The richness of the source is the literal wealth of names to be found in the document of over 900 female and male suffrage campaigners that were at some point arrested. It’s a document that moves away from just viewing the Pankhurst figureheads of the movement and looks at the many individuals who were prepared to risk their jobs, families, and sometimes their health for a cause they believed in.

The index contains names such as Flora Drummond who at the time of her imprisonment was in her first trimester of pregnancy; William Ball, temporarily certified insane after a being force fed in prison; and Princess Sophia Duleep Singh who was at the front of the Black Friday procession when suffragettes clashed with the police. Most importantly the index lists many largely unknown women from across the country.

The very nature of this document’s focus on arrest naturally excludes many who campaigned by pacifist means, however ultimately this document illustrates a view of suffrage rarely seen, a mass movement of active women and men across the country from many different types of suffrage societies. 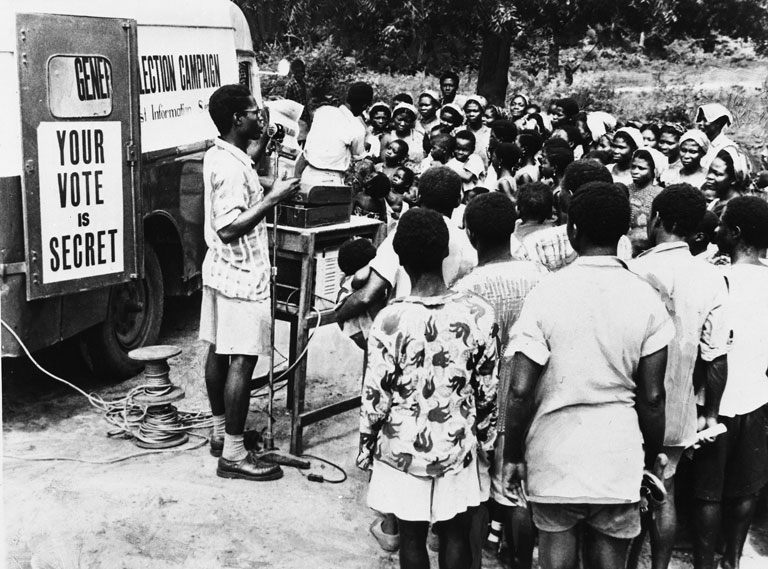 Ann Chow, Online Editor, nominated the above photo saying, ‘The people of the British Togoland in 1956 went to the polls to decide their future with the union with the then Gold Coast.

‘I like the fact that this photograph reveals how people were educated in how to vote for a specific moment in history. The photo shows a Mobile cinema van in Tsame which was used to explain the procedure for voting during the forthcoming election (dated 1954).’

Our Head of Modern Domestic Records, Simon Demissie nominated a very recent addition to our collection, the Agreement between the UK Government and the Scottish Government on a referendum on independence for Scotland: signed at Edinburgh by The Rt Hon David Cameron MP (Prime Minister), The Rt Hon Alex Salmond MSP (First Minister of Scotland), The Rt Hon Michael Moore MP (Secretary of State for Scotland) and Nicola Sturgeon MSP (Deputy First Minister for Scotland); with original pen used to sign the agreement. 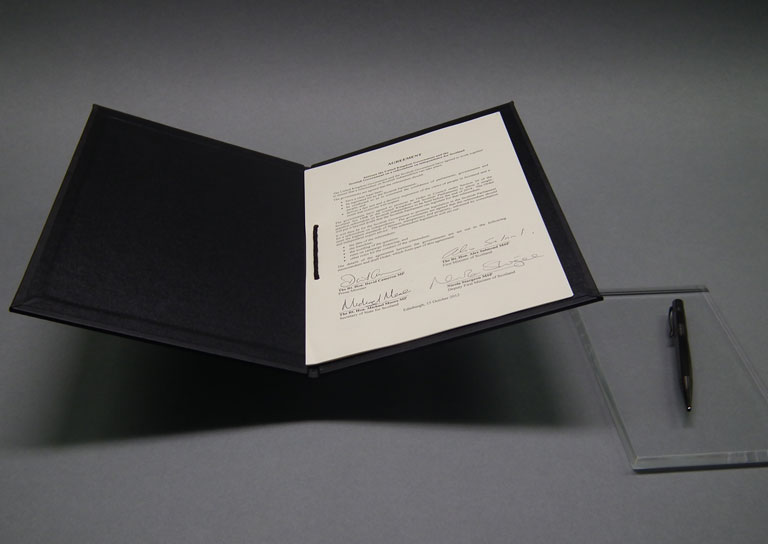 Simon said: ‘There is much discussion about what historians consider to be the starting point of contemporary history. Brian Brivati claimed it should start in 1956 (after Suez) in The Contemporary History Handbook, the Institute of Contemporary British History have 1945 as their marker, and my colleague Juliette tells me that in France they treat anything after the revolution in 1789 as ‘contemporary history’.

‘I think all would agree, however, on the contemporary nature of the agreement between the UK Government and the Scottish Government to hold a referendum on independence for Scotland. Accessioned here in October 2012, only three days after it was signed, the document represents one of the most recent additions to our physical collection and includes the signatures of the Prime Minister David Cameron, the then First Minister of Scotland Alex Salmond, and his deputy Nicola Sturgeon, as well as the Secretary of State for Scotland at the time, Michael Moore. It also may come to represent a notable period for democracy, as the referenda on the Alternative Vote system in 2011, Scottish independence, and the UK’s relationship with the EU mark a period when significant constitutional questions about the country have been put to public vote.

‘The final element of significance regarding this document is that the pen used to sign the agreement has been accessioned alongside it. Meaning – as was noted at the time – it is one of the genuinely once-in-a-lifetime opportunities of seeing a pen in the reading room.’

And last but not least Andrew Janes, Senior Archivist – Future Catalogues, nominated a drawing of a clock face for the Houses of Parliament. The National Archives’ collection includes over 3,000 plans and drawings relating to the Palace of Westminster, home of the UK’s Parliament. This example (shows one of the dials on the Clock Tower (now known at the Elizabeth Tower after Queen Elizabeth II), which is home to the famous Great Bell, nicknamed Big Ben. Sited at the heart of British democracy, the Elizabeth Tower and the chimes of Big Ben are internationally recognised as symbols of London and of the UK as a whole. 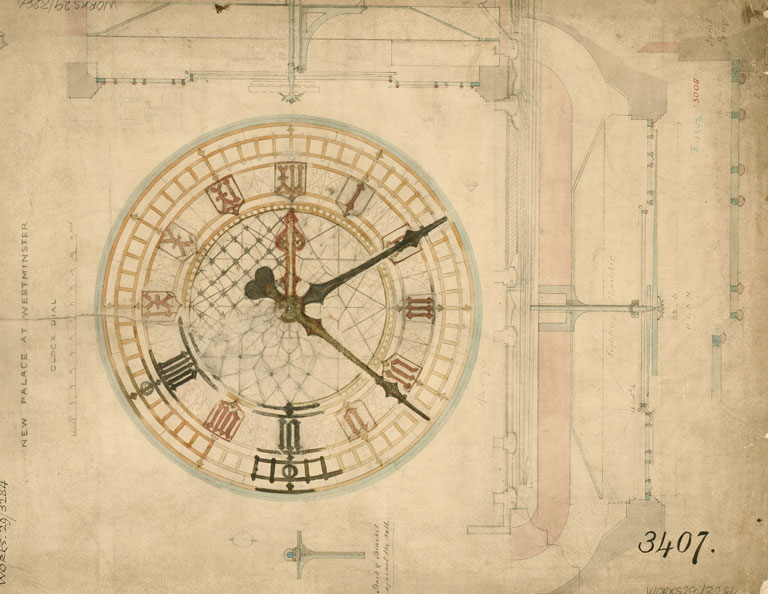 We’d love to know what documents you’ve found in your research – you can share them with us in the comments below or on Twitter, just use #IAD15 and #democracy.