On 7 November 2015 The London Gazette celebrates its 350 year anniversary as the oldest surviving English newspaper, and the oldest continuously published newspaper in the UK. You can find all 350 years of it online at www.thegazette.co.uk.

The Gazette contains a wealth of official information

It all began in 1665. Following the outbreak of the plague in England, Charles II was forced to move his court out of London to Oxford. Exiled courtiers were so terrified of the disease that they were unwilling to even touch London newspapers for fear of contagion. To allow the court to report the facts of the day, the Oxford Gazette was born; first published on 7 November 1665.

On 4 February 1666 it became the London Gazette, when the court moved back to London as the plague abated. As the first official journal of record and the newspaper to the Crown, The London Gazette became the authoritative source of news and has been published by authority ever since.

The Edinburgh Gazette was first produced in 1699 and was printed continuously after 1793. The Belfast Gazette has been in production since 1920 (its forerunner was The Dublin Gazette, which was in print from 1706).

All three Gazettes came together, online, in 2014, when The Gazette website was launched. Gazette notices are now published as high quality open data in modern formats, freely available for reuse (if you’re a data geek, take a look at the reusing data page).

As well as being one of the oldest newspapers in the UK, The Gazette is also an official, permanent public record, published under the authority of Her Majesty’s Stationery Office (HMSO). In case you didn’t realise, the functions of HMSO are carried out from within The National Archives.

Check out the timeline

You might have come across The Gazette when looking for military records and despatches from the front, or the Queen’s Birthday and New Year honours.

But it documents all kinds of iconic events in British history, from The Great Fire of London and the founding of the Bank of England, to the proclamation of the suppression of piracy. This, and more, can be found in a brilliant timeline on The Gazette website. I urge you to take a look – it’s a real treasure trove. 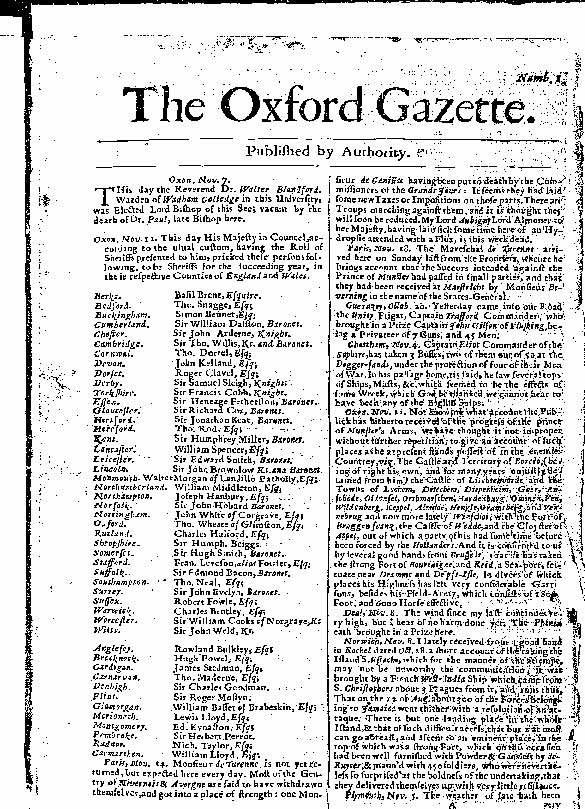 The very first Oxford Gazette was published on 7 November 1665

Of course the timeline showcases just a fraction of the type of events recorded in The Gazette’s 350 year history. To really get to grips with what is in The Gazette, you need to search the archives. These are free and easily accessible online, broken down by sector to help you quickly find what you’re looking for.

With all notices accessible via one site, you can find everything you’re looking for – whether it originated in the London, Edinburgh or Belfast Gazette. But when you’re searching for information that dates back to 1665, it’s useful to have some search tricks up your sleeve. I’ve found the search video, the search factsheet and the handy search hints really useful. So if you’re interested in researching your family history in The Gazette, the search help provided on The Gazette website is a good place to start.

If you discover something memorable about a family member in The Gazette and have a story to tell, I’d love to hear from you. Either leave a comment below, or share your story using the form on The Gazette website.