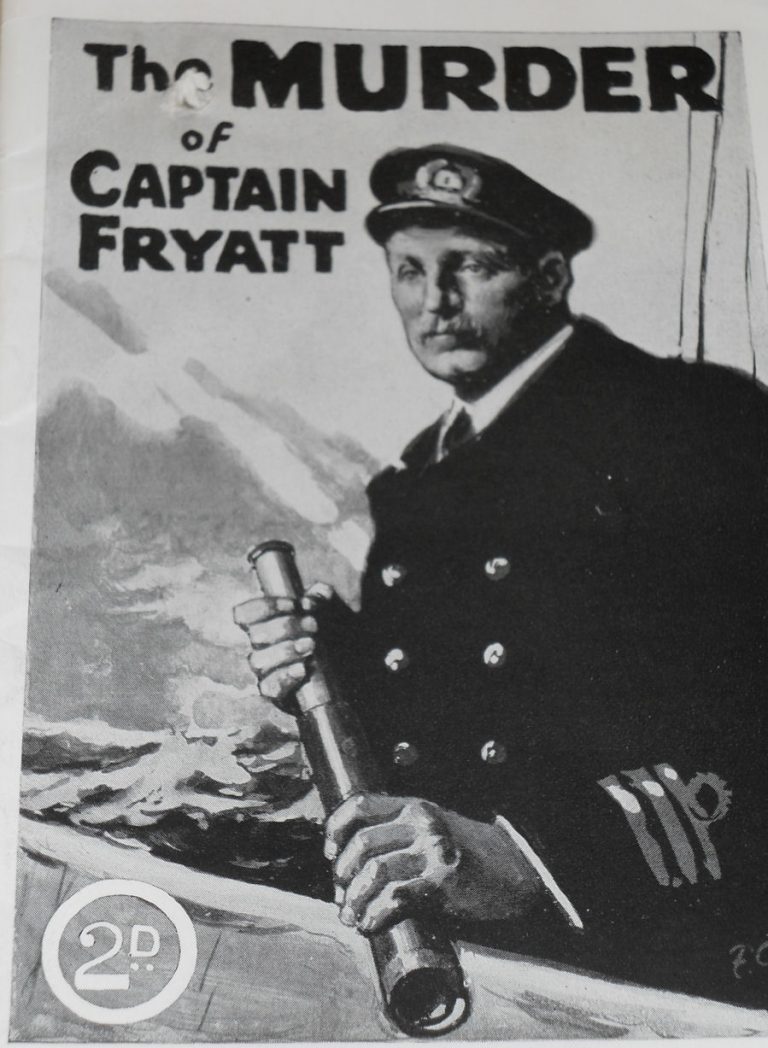 On 27 July 1916, Charles Algernon Fryatt, the Captain of the SS Brussels – a passenger ferry that ran between Harwich and neutral Holland – was executed by the Germans. He was only the second British civilian to be executed during the war; the other was nurse Edith Cavell, who was shot on the morning of 12 October 1915.

At the time, the executions of Cavell and Fryatt caused international outcry; their funerals were attended by thousands of enraged and patriotic mourners. While Nurse Cavell is now considered a martyr and a victim of German barbarism, the case of Captain Fryatt has all but disappeared from public consciousness.

Charles Fryatt was born in 1872 and on leaving school joined the merchant navy. He quickly rose through the ranks and in 1915 became master of the SS Brussels, a Great Eastern Railway ship that sailed between the ports of Harwich and Rotterdam.

In February 1915, following the outbreak of the First World War, the German government announced that merchant ships operating in British waters would be attacked without warning. This was no idle threat. In March 1915, the SS Wrexham was attacked by a German U-boat and chased for 40 nautical miles into the port of Rotterdam. On 28 March 1915, the British steamship RMS Falaba was torpedoed and sunk by a German U-boat, resulting in the death of 104 people including one American passenger (ADM 137/3117).

On the same day that the Falaba was sunk, the SS Brussels was approached by a German submarine during a routine trip to Rotterdam and ordered to stop. Rather than give up his ship, Captain Fryatt ordered the crew to proceed at full speed and attempted to ram the submarine, forcing it to crash dive to avoid destruction. 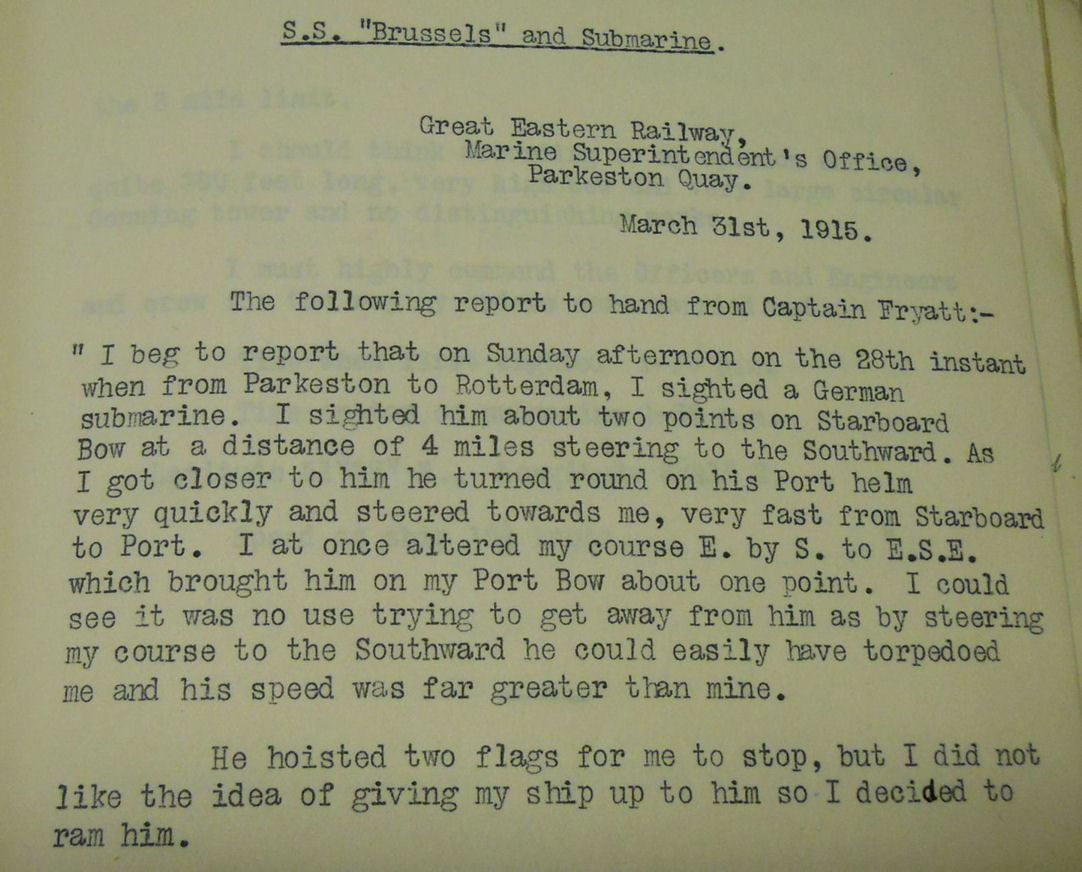 In ensuring the safety of his ship and crew, Captain Fryatt was awarded a gold watch by the Admiralty. His exploits were also mentioned in Parliament, with both party leaders praising his courage and determination in the face of enemy attack. Following the encounter with the submarine, Fryatt returned to normal duties.

Over a year later, on 22 June 1916 the Brussels, loaded with foodstuffs and a party of Belgium refugees, set sail from the Hook of Holland bound for Tilbury. No sooner had it left Dutch waters, the ship was surrounded by five German destroyers. Fryatt was ordered to stop; the ship was then boarded and taken to Bruges in occupied Belgium.

The Germans were intent on revenge and on 16 July charged Captain Fryatt with attempting to sink a German submarine. He was a non-combatant, and was accused of being a ‘franc tireur’ – a civilian engaged in hostile military action. Fryatt was tried before a Court Martial on 27 July at Bruges Town Hall. He was found guilty and sentenced to death. He was executed by firing squad at 19:00 the same evening, shot in the Jardin de l’Aurore next to the barracks on the eastern edge of Bruges. He was 43 years old and left a wife and seven children. His death was officially confirmed in a telegram sent from the American Ambassador to Lord Grey, the British Foreign Secretary. 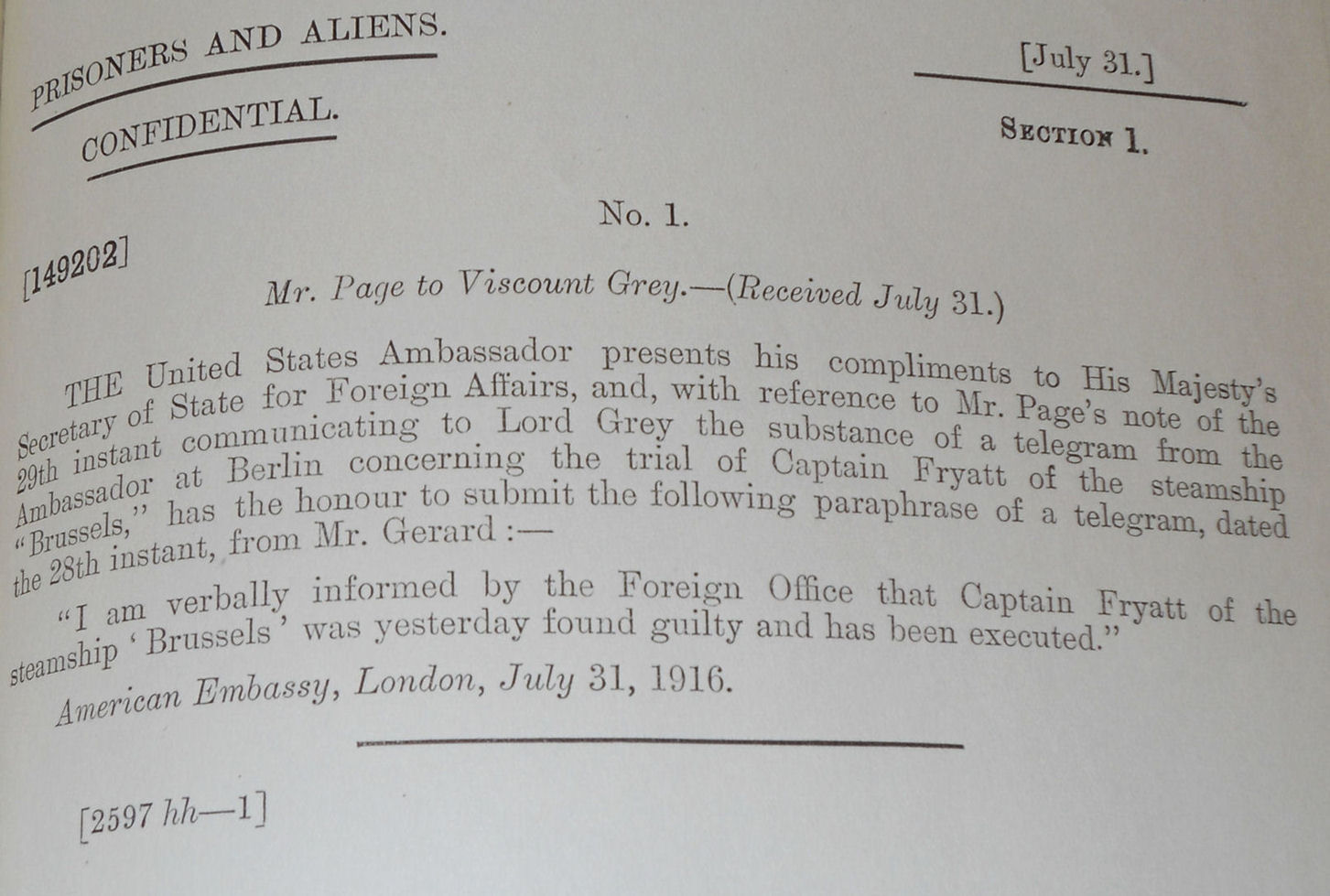 Telegram received from the US Ambassador (catalogue reference FO 383/195)

The news of the trial and death sentence caused a storm of protest. The British Prime Minister, Herbert Asquith, described the execution as an atrocious crime against international law that clearly demonstrated that Imperial Germany had adopted a policy of terrorism. This view was echoed by the First Lord of the Admiralty, Arthur Balfour, who claimed that Fryatt’s death was a calculated act of ferocity that amounted to judicial murder.

On Sunday 6 August, a large crowd gathered in Trafalgar Square to protest against Fryatt’s murder and heard a demand from his widow, that ‘the perpetrators of this foul crime on my dear husband be punished’. The War Cabinet agreed and considered the confiscation of all German property in the United Kingdom as a reprisal for the murder of Captain Fryatt (CAB 42/17/1).

To honour the sacrifice made by Captain Fryatt, a national memorial fund was opened with the Great Eastern Railway awarding his widow a pension of £250 per year. The Dutch branch of the League of Neutral States presented the company with a memorial tablet which was installed at Liverpool Street Railway Station. The memorial, which still has pride of place on the concourse, was officially unveiled on 27 July 1917 to mark the first anniversary of captain Fryatt’s execution. The incident inspired a silent film, ‘The Murder of Captain Fryatt‘ (1917), starring Harrington Reynolds and Olive Proctor as the Captain and his wife. A Public House in Parkeston, a wing at Dovercourt Cottage Hospital and a mountain in Canada were also named in Captain Fryatt’s honour.

In July 1919, following the end of the First World War, the body of Captain Fryatt was exhumed from the cemetery near Bruges and returned to Britain aboard the destroyer HMS Orpheus. The coffin was draped in the Union flag and guarded by four bluejackets with fixed bayonets. Following its arrival at Dover, the coffin was transported by rail to Charing Cross Station. It was then solemnly placed on a gun carriage and provided with a naval escort for the short journey to St Paul’s Cathedral for a state funeral. Following the service, attended by the Prime Minister and War Cabinet, the funeral cortege led by drummers from the Royal Marines made its way to Liverpool Street Station. Thousands of people crowded the pavement many of whom were merchant seamen and their families who wished to pay their last respects. (HO 45/10903/382997) 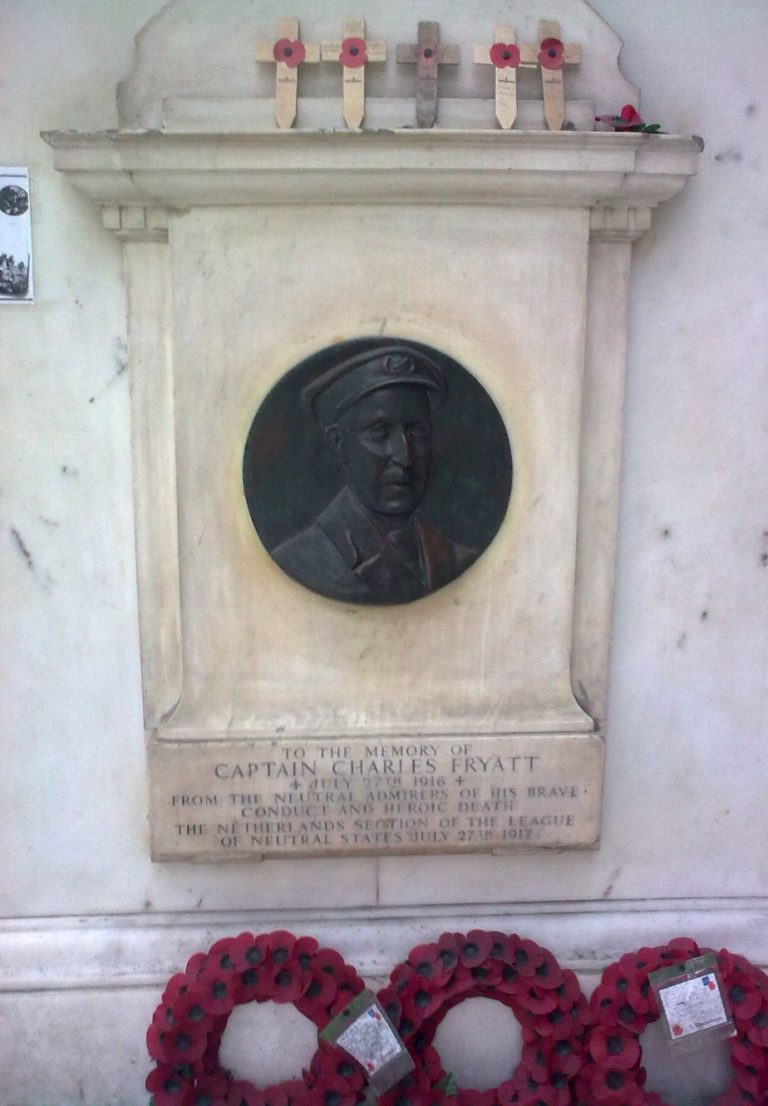 The body of Captain Fryatt was finally laid to rest in the graveyard of All Saint’s Church, Upper Dovercourt, Harwich where it overlooks the harbour. The interment was presided over by the Bishop of Chelmsford who compared the sacrifice made by Captain Fryatt to those of Edith Cavell and Jack Cornwall, who was killed in the Battle of Jutland aged 16 years. As the coffin was lowered into the grave buglers sounded the last post. The inscription on the headstone reads:

‘In Memory of Captain Charles Algernon Fryatt, Master of the Great Eastern Steamship Brussels, illegally executed by the Germans at Bruges on 27 July 1916.’

After the war, an Committee of Enquiry was established to look into the incident (CAB 24/85/6). Those responsible for the death of Captain Fryatt were never brought to justice.