Bullets and biscuits: ANZACs at Gallipoli 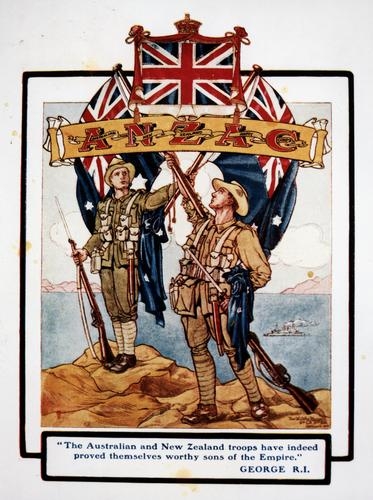 Gallipoli has a particular importance for Antipodeans. 25 April is our Remembrance Day, a national holiday, when flags are raised and lowered, services held and the war dead from all conflicts are honoured for their sacrifice. Even today, 100 years later, most young New Zealanders in Europe on their ‘overseas experience’ will visit Gallipoli, gaze on Suvla Bay and reflect. This year for the centenary the interest in attending the ANZAC day service at Gallipoli was so great that over 10,000 people applied for the 1,900 places allocated to New Zealanders and a public ballot was held to assign tickets.

Unsurprisingly, in the bookshop our Gallipoli shelf is mushrooming. Peter Hart’s Gallipoli is a good place to start to gain an overview of this tragic conflict. For an alternative view, Edward Erickson’s Gallipoli: the Ottoman campaign provides a closer examination of the opposing forces.

Pen and Sword’s Dispatches from the Front is a really interesting series which reproduces the official communications written at the time by the men on the ground. Clearly the very nature of the documents colours what is or isn’t included, and an official report is very far from the whole story. Nevertheless these provide a fascinating read. The volume Gallipoli and the Dardenelles includes all the dispatches sent by General Sir Iain Hamilton, the Commander of the Allied Mediterranean Expeditionary Force, a man who simply refused to accept that his operation was flawed from the outset and who continued to maintain that victory was possible despite the tragic reality unfolding before his eyes. Contrast this with the view of the men on the ground provided by Richard Van Emden and Stephen Chambers’ Gallipoli. (I know, every single one of these books is titled Gallipoli – if you want to retrieve a particular title make a note of the author.) Van Emden takes extracts from the diaries, letters and reports of the men who served and arranges them into a coherent account which because it uses the words of the men themselves manages to convey the emotional landscape of the conflict. This particular edition is movingly illustrated with over 150 sepia photographs, many never published before.

I usually prefer to approach my history through fiction rather than straight historical accounts. There is not much Gallipoli fiction in print in the UK although there are some great novels like Christopher Lee’s Seasons of war and Stephen Daisley’s Traitor published in New Zealand and Australia. See if you can get copies via your local library. Traitor is a winner of the (Australian) Prime Minister’s Award for Literary Fiction and has had amazing reviews. It is is a stream of consciousness novel narrated from the perspective of a Gallipoli veteran living on a New Zealand farm in the 1960s. The hero David Munroe had a difficult war, as he was court-martialed for desertion and treason when he helped a Turkish officer escape from a prisoner of war camp. Lyrically beautiful, the novel explores elements of Sufism and Maori mysticism in the context of war. I have read extracts and rumour has it it will be available here later this year.

Another approach is taken by Joan Beaumont who has written Broken nation: Australians in the Great War. This is a fascinating study of the effect of the First World War, and Gallipoli in particular, on the Australian psyche. It is interesting to discover that, for a conflict which forged a national identity and the value of ‘mateship’ which became a defining element of the Australian character, in fact only 30% of men between 17 and 60 went abroad to fight. The gulf between those who left and those who stayed caused divisions which endured long after the war had ended.

For those interested in the wider context of New Zealand’s participation in the First World War sculptor Helen Pollock’s work Falls the shadow which is housed in the New Zealand Memorial at Passchendaele is a moving and emotional piece honouring those from Aotearoa who died. I saw it when it was at The Carriere Wellington Memorial at Arras where the tunnels left under the lines by New Zealand sappers all carry the names of their home towns. The sculpture is hugely powerful – do have a look. Arms stretch out from a pool of water against a backdrop of a landscape stripped bare by the fighting. The sculpture is made from the mud of Flanders mixed with clay from Coromandel on the Hauraki Gulf in New Zealand’s North Island.

On a sweeter note let us not forget ANZAC biscuits, an absolute taste of home for all New Zealanders. Made from a mixture of flour, oats, coconut and golden syrup they were originally baked to send to the troops serving in Gallipoli (the absence of eggs made them particularly shelf stable). Like all great national recipes every home has its own preferred ANZAC biscuit recipe and the crisp-versus-chewy debate rages widely and can divide generations.

Indeed, the use of the term Anzac biscuit is actually enshrined in New Zealand legislation with a specific requirement that they always be referred to as ANZAC biscuits never cookies (I kid you not). If you would like to have a little taste of New Zealand this ANZAC Day I would encourage you to attempt the recipe of Alison Holst (New Zealand’s Delia, a Dame Companion of the New Zealand Order of Merit and the New Zealand font of wisdom on things culinary). Although even around the oeuvre of the great Dame Alison there will be voices of dissent (almond essence – not for me, that is just wrong!) Read the recipe.