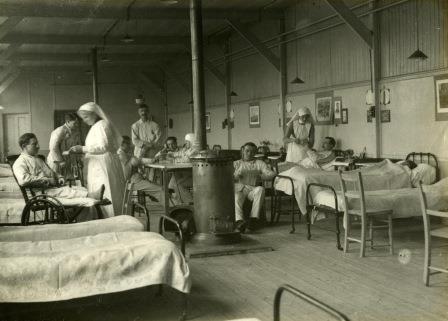 What are you more scared of – a bullet or bacteria? To a soldier on the Western Front his greatest enemy was arguably not the German soldier firing at him from the trenches opposite, but the threat of infection to his wounds.

Major battles such as the Somme, Ypres and Passchendaele were fought on agricultural land, rich in manure. A soldier’s wounds were very vulnerable to bacteria, and gangrene infections led to frequent amputations and fatalities. An article by Dr William Sherman for the Royal Society of Medicine in 1917 claimed that 80 % per cent of amputations and 75% of deaths after 24 hours were due to infection.

It seems obvious that the government should have invested in research to develop new treatments and techniques that would save lives and speed recovery, but in fact files from the government’s Medical Research Committee (now the Medical Research Council) often refer to the need to challenge the prevailing view that ‘this is no time for research’. The Medical Research Committee (MRC), founded in 1913 and led by Sir Walter Morley Fletcher, actively encouraged and financially supported research as well as collaborating with American and French scientists in an effort to combat the problems of war injuries and illnesses.

The Committee’s files, held here at The National Archives in record series FD 1 to FD 27 include reports to Parliament and correspondence with research scientists and the editors of the Lancet and the British Medical Journal. Reading the files you can piece together discussions and controversies around the research and implementation of medical developments during the war.

One file, FD 5/61, contains correspondence between Sir Walter and Colonel Charles John Bond, a member of the Committee and the Consulting Surgeon to Northern Command, based at Leicester Royal Infirmary. In particular they are keen to encourage research into antiseptics and to find out more about the work of a chemist by the name of Henry Drysdale Dakin.

Dakin had developed an antiseptic solution that could disinfect a wound without harming the surrounding tissue. He had been working with a French surgeon, Dr Alexis Carrel, at a British Red Cross Hospital in Chateau d’Annel Compiegne – near the front line – where his solution was used in combination with Carrel’s wound irrigator to prevent infections.

On 6 August 1915 The Times reported that ‘The long-sought-for ideal antiseptic, which would destroy the septic agents in wounds without damaging the tissues, is said to have been discovered by Dr Alexis Carrel, of the Rockefeller Institute, assisted by Mr Henry Dakin, the chemist, as the result of a series of experiments conducted at the Military Hospital at Compiegne, under the direction of Dr Carrel’.

The Times article went on to say that ‘The new preparation had been applied to the most frightful wounds, with the result that within eight days their aspect had been modified in a way quite unknown under the old antiseptic processes. Cases of gangrene had been radically prevented at the very outset. Indeed, if the new antiseptic was applied in time, it was not too much to say that the infection of wounds might henceforward be considered impossible’.

On 9 August 1915 The Times printed a letter from Harvey Littlejohn, Dean of the Faculty of Medicine at the University of Edinburgh. Mr Littlejohn stated that ‘it is only due to Dr Lorrain Smith, Professor of Pathology in this University, and three members of his department to state that five months ago they recommended for surgical purposes the employment of what appears to be the same antiseptic, and the results of their experiments and investigations were published in the British Medical Journal on July 24’.

Despite the controversy, the MRC maintained its interest in Dakin and in September 1915 Sir Walter wrote to Colonel Bond saying ‘Arthur Balfour has had a talk with Dakin, and the Admiralty are sending him in a special boat to try his method on a big batch of wounded from the Dardanelles, and Watson Cheyne, who seems half converted, is going with him to watch the results!… Dakin is a first-rate man, and it is work the Admiralty definitely want us to do’.

Dakin was also instrumental in improving general conditions on board hospital ships, devising a simple and cheap way to produce a disinfectant from sea water using electrolysis. With the equipment he designed, it cost less than 3d. to manufacture 100 gallons of disinfectant and it was a job that could be done by anyone with only a little training.

The second annual report of the MRC to Parliament (1915-1916) in FD 2/2 says ‘The first test of the method was made on HMHS Aquitania… The electrolysed sea-water was used for the general disinfection of the floors and walls of the wards, and in the latrines and bedpans. A striking diminution, indeed an abolition, of the previously grave number of cases of secondary infection immediately followed its introduction to use. The deodorant action of the solution at the same time gave great relief’.

Support for Dakin was not limited to the UK. Sir Walter Fletcher reported that Dr William Sherman from America was ‘a red-hot enthusiast’ who was determined to break down ‘what he regards as the resistance of surgeons in this country to an enormous advance in surgery, which he thinks will rank in future years with the work of Lister’.

Dakin’s contribution to the survival and recovery of service personnel during the war was hugely significant and the research that he and his contemporaries carried out into antiseptics has been of long term benefit.

With my colleagues, Vicky and David, I will be looking for more stories of medical advances inspired by the war. Keep an eye out for our blog posts.