Today’s blog post, using the Military Service Tribunal papers from MH 47, will look at the emotional impact of the First World War on the Home Front. We will specifically see how the shared experiences of military service, loss and sacrifice affected individual households and the local communities they formed a part of.

97 years ago, on 25 May 1916, compulsory military service into the Army was extended from single men and widowers without children to cover all men – single and married – aged between 18 and 41, and who had been resident in Great Britain since 4 August 1914. This extension of conscription was a result of the continued difficulties of manning the army due to the number of casualties overseas.

The story of John Gordon Shallis is one of the many interesting finds from our MH 47 pre-digitisation work. Mr Shallis appealed for exemption from military service on grounds of domestic hardship, having lost four of his brothers during the war. John’s mother is described as a “cripple” on his appeal form, having broken her leg, and his father was away carrying out Home Defence duties with the Territorial Force. 1 This left John as the only son left for the family.

The first of John’s brothers to lose his life was George Victor Shallis, a member of the Merchant Navy. George was on board the armed merchant ship HMS Viknor when it went down off the coast of Northern Ireland on 31 January 1915. The Admiralty case file in ADM 116 reveals that the Viknor most likely struck a mine having been blown off course by bad weather. 2 George is listed as a Steward, with his wife and their address listed under Next of Kin (see image, below).

The second brother to fall was Albert Stanley Shallis, a member of the 2nd Battalion Royal Fusiliers who landed at Gallipoli on 25 April 1915. The Battalion War Diary from WO 95, which is available to view digitally via our online catalogue, Discovery, describes the landing as meeting little immediate opposition until ‘W’ and ‘X’ companies attacked Hill 114. 3 The resulting heavy casualties are evident using the Commonwealth War Graves Commission website, showing that at least 110 other members of Albert’s battalion fell on this day. 4

The third Shallis son to lose his life was Harry while fighting with the 1stBattalion King’s Royal Rifles in May 1915. The Battalion War Diary confirms that this battalion suffered 307 casualties on the night of 15/16 May during fighting around Aubers, near Lille. 5 Using our collection of photographs from the Western Front in WO 316, we gain a unique insight into the terrain that Harry and his comrades fought over, adding perspective to the written accounts of this fighting (see image, below). 6 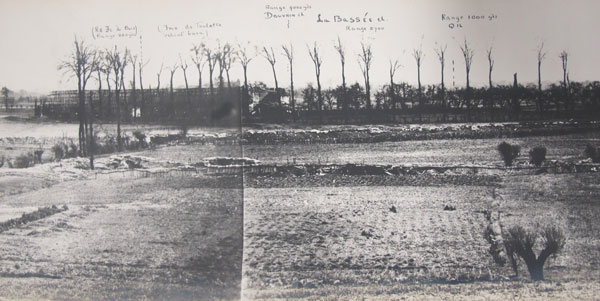 Artillery panorama of Richebourg L’Avoe, May 1915. Looking towards enemy positions, this is the ground which Harry Shallis fought over in May 1915. WO 316/24.

Charles Leopold Shallis was the fourth brother to lose his life when HMS Defence went down during the Battle of Jutland on 31stMay 1916. Like most of the online naval service records found in ADM 188, we can find personal features of Charles listed on his service history, including that he had three tattooed dots on his right forearm, had brown hair, hazel eyes and was of a fresh complexion. 7  Perhaps some of these personal details have been lost over time and so would be of particular interest to ancestors and family historians. 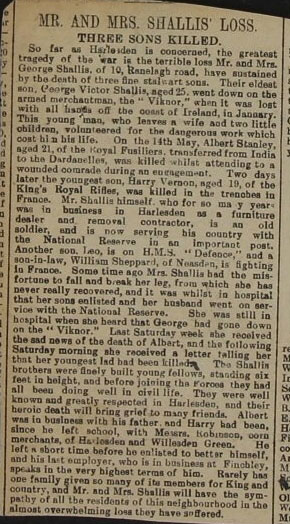 Included in the tribunal case paper for John Gordon Shallis is a small cutting (see image, right) from a local newspaper, describing the losses of Mr and Mrs Shallis as the “greatest tragedy of the war” for Harlesden. The article finishes with a heartfelt declaration that “rarely has one family given so many members for King and country, and Mr. and Mrs. Shallis will have the sympathy of all the residents of this neighbourhood in the almost overwhelming loss they have suffered”. 8 Given these exceptional personal circumstances and his employment within the munitions industry, John was granted an exemption from compulsory military service by the tribunal system but the newspaper cutting importantly highlights how the shared experiences of wartime – military duty, sacrifice, and loss – brought local communities together.

In contrast, the case of Charles Rubens Busby reveals the cruel, even ruthless attitudes of the local community if it was perceived that certain members were unfairly avoiding these shared demands of wartime.  An anonymous letter from a local resident, sent directly to the Middlesex Appeal Tribunal, is attached to Mr Busby’s case paper. The letter questions why Mr Busby is allowed to keep his butchers shop and not serve while “married men have had to shut up their shop and go”. Mr Busby is subsequently described as “a proper rotter of a man” and a “rotten shirker” (see image, below) for not serving, at a time when the author has suffered the loss of two sons. 9 For the record, Mr Busby did later serve with the Royal Navy and Royal Air Force between 1917 and 1918, clearly dispelling the “shirker” tag used by the anonymous author. 10  This example, however clearly highlights the depth of feeling – even bitter resentments – felt by local communities if it appeared that certain individuals were unfairly avoiding the shared demands, sacrifices and losses experienced during wartime. 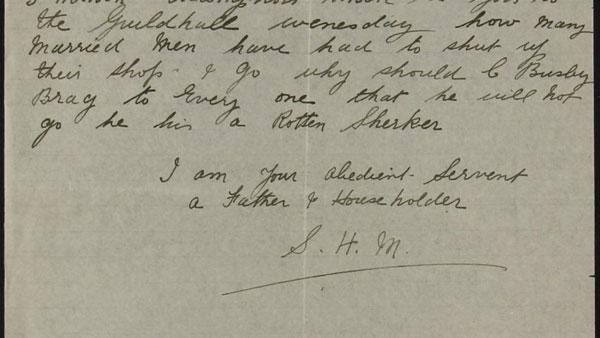 Although largely restricted to the Middlesex region, and only limited to those that went before the County Appeal Tribunal, the MH 47 records do provide a direct insight into the tensions created and losses suffered on the Home Front during the First World War. Our project to digitise these records is running to schedule and we hope to make them available online by the end of the year. Please keep checking for more blog posts on the project in the coming months and further information can be found on our project webpage.