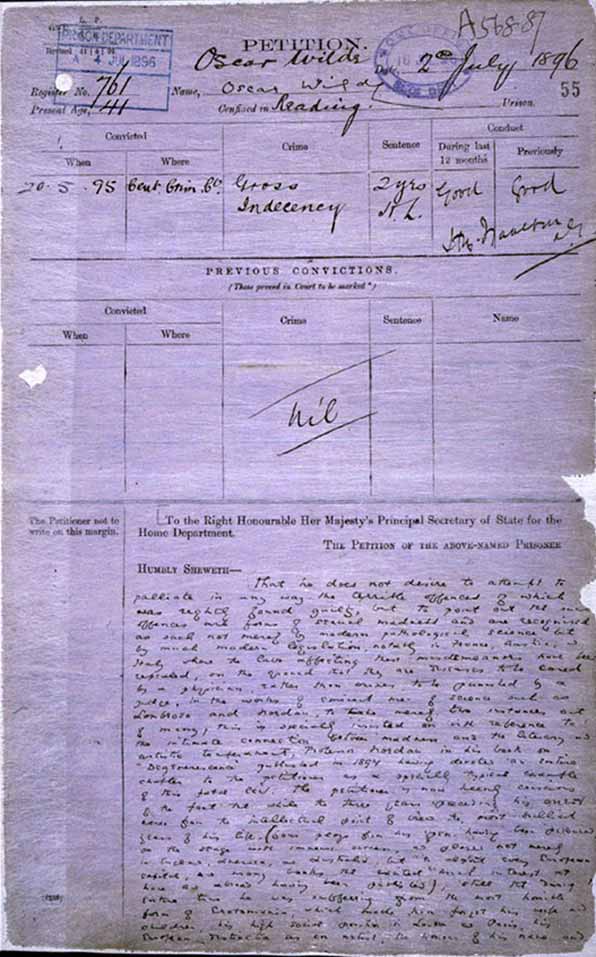 On 25 May 1895 Oscar Wilde was sent to prison for two years after being found guilty of the crime of gross indecency, following his relationship with Lord Alfred Bruce Douglas.

We have key documents in our collection relating to Wilde’s trial and imprisonment. They are an invaluable resource to understanding Wilde’s interaction with the authorities during this turbulent time in his life. The records include evidence from his trial, petitions he made to the Home Secretary and letters sent to the governor of Reading Gaol regarding Wilde, from his friends, his family and complete strangers.

These records inspired us to write a performance piece to bring the words of Wilde and those associated with him to audiences in a new and exciting way. The short play ‘Suffering is one very long moment: The imprisonment of Oscar Wilde’ uses words taken directly from our collection.

This demonstrates how the first-hand accounts and primary sources found in archives can be used to inspire creativity and explore historic events and themes.

First staged in October 2016 at our Victorian Crime late event, the piece went on to be performed at a central London venue as part of Museums Showoff, then as part of the OUTing the Past Festival and finally as a part of the Queer and the State evening.

The actors were all members of staff from The National Archives. Here, two of them explain how they used the records to research and then portray these people. 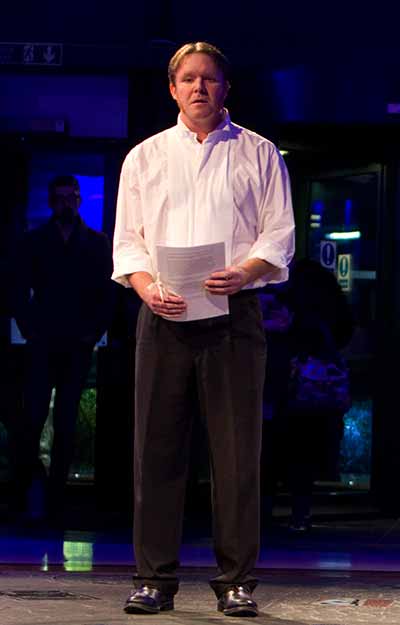 ‘I have nothing to declare except my genius…’

When I was growing up my elder brother had a t-shirt emblazoned with that quotation, so from a young age I was intrigued by Oscar Wilde, a man who was able to dazzle Victorian society with his wit and intelligence but whose fall from grace was heartbreakingly rapid and tragic.

The more I read of the man and his works as I got older the more fascinated I became. The chance to read his petition and try to portray him on stage was an opportunity I could not pass up.

The play centred on Wilde’s written petition for clemency to the Home Secretary while incarcerated in Reading Gaol. It is extraordinary to think that The National Archives holds this document, let alone be able to view it. The words – only a small extract of which were used for the performance – are incredibly moving. It is amazing to be able to research the character for a play using primary source records written by the person one is looking to portray.

What started out as a desire to be familiar with the words so that I was able to read the petition with feeling quickly transformed into a need to act them out to adequately portray the emotion Wilde imbued in them, and to do any kind of justice to the man in my performance.

The petition is so much more than an internal wrestling match with his conscience. Rather it is part abhorrence at the prison system which looked to physically and emotionally break those incarcerated, part a request for clemency for his own fragile mind.

For the sake of the performance we wanted to get across the complex set of emotions Wilde was experiencing – despair, anger, horror, guilt, anguish, contempt….the list goes on. What we wanted to achieve in a short space of time – the 10 minutes or so of the piece – was to try to take the audience on a small part of the journey that Oscar experienced and find the levels within the performance where there was his natural showmanship leading to incredulity and on to anger and introspection before his despair takes hold.

Even in the midst of the despair of his incarceration he remains the poet. However heartbreaking the written words are, they are also a joy to perform because every one is imbued with the great man’s emotions. I only hope that we have been able to do him and his words justice.

‘Man is least himself when he talks in the first person. Give him a mask, and he will tell you the truth.’ 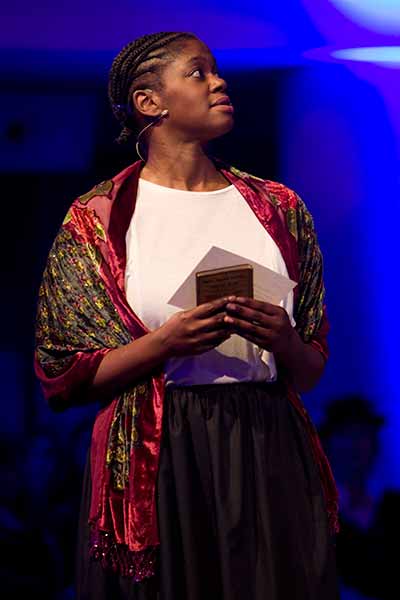 By Clarissa Angus who portrayed ‘An Irishwoman’

It was a privilege to be a part of this project and in interpreting words written in a letter over 120 years ago. During his imprisonment, the Governor of Reading Gaol received a letter about Oscar Wilde that was simply signed:

‘I beg and remain faithfully yours, an Irishwoman’

It was touching to read the words of someone who had taken the time to petition a cause for a complete stranger and who sent a book hoping he would receive it. I wanted to interpret her sentiments as a genuine, heartfelt statement that could leave folks (in the present) feeling as if they could be a bit nicer to everyone else, if they tried.

The letter is an amazing example of why archives are awesome. It could very easily not have been kept as part of the official record of Oscar’s very difficult time.

I performed an extract but its full text suggests that, although the Irishwoman may have held certain personal views and beliefs, she still found something within her to take the time to appeal to the state on behalf of another human being, no matter who they were. I really hope I was able to get some of that across!

‘I have never even seen him, but it must indeed be a hard heart, utterly unacquainted with God’s love that does not bleed for such a shipwrecked life, such a heartbroken man.’ 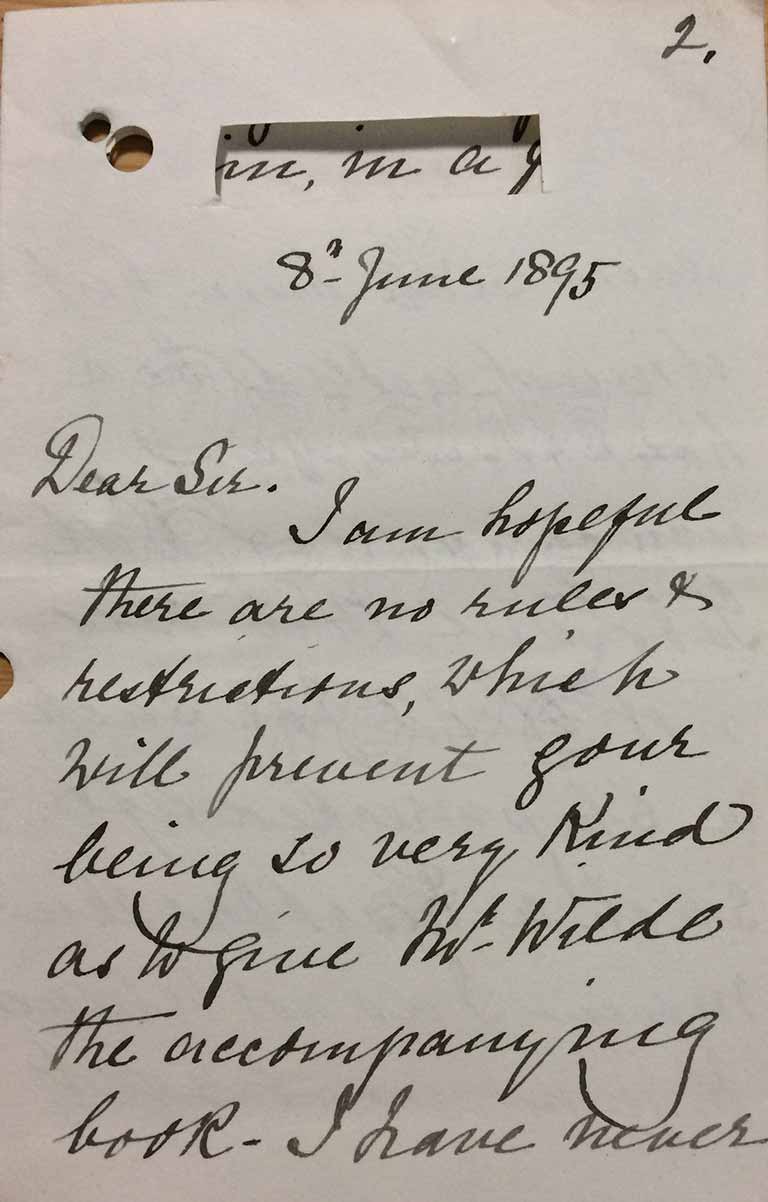 Find out how to explore gay and lesbian history in our collection.

Listen to our podcast on the key documents about Oscar Wilde’s trial and imprisonment in our collection.