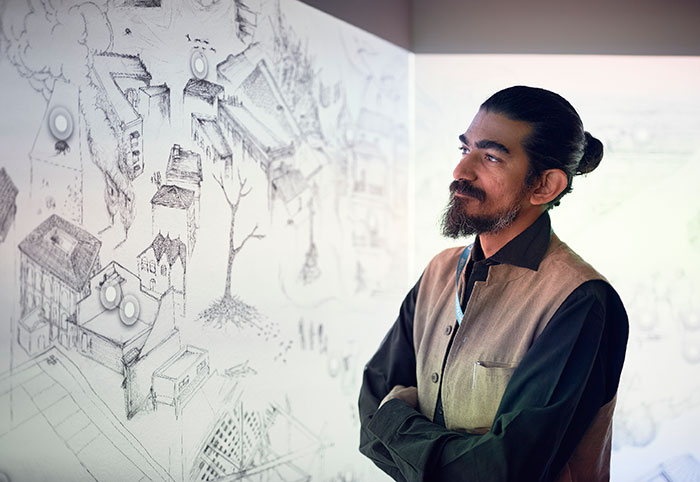 Today we are celebrating all things #archivescience by looking a special commission for Wellcome Collection’s exhibition ‘Ayurvedic Man: Encounters with Indian Medicine’, which shows how the archives of science and medicine can inspire artworks, helping us to interpret and understand the past in new ways.

Art and science are so often seen as opposites (thankfully Michelangelo didn’t see things that way), and a disease like plague may not seem the most appealing of subjects for an artwork. However, artist Ranjit Kandalgaonkar’s fascinating new commission, ‘Drawing the Bombay Plague’, explores the 1896 epidemic which killed over a million people. It is the result of extensive archival research from different kinds of documents that work together to reveal the multiple narratives of an epidemic in a community.

Kandalgaonkar used photographs, chronicles and maps from Wellcome Collection, alongside the report of the Bombay Plague Committee. Bookended by disease-curing Goddesses Ola Bibi (cholera) and Sitala Devi (small pox, now chicken pox), the painting offers multiple voices, from traditional religion to modern print culture. The artwork draws on satirical images from ‘Hindi Punch’, held at the Asiatic Library in Mumbai, which expose some of the divisions of colonial society.

By bringing these different narratives together, Kandalgaonkar has created a picture of the differing ideas and beliefs that emerged during this outbreak. One of the key themes of the ten feet long canvas is the reaction of both the public and officials to the disease; misconceptions surrounding its transmission  feature in the artwork, showing the pernicious way in which rumour and ‘fake news’ can spread through society as easily as the plague itself.

The painting highlights some deeply uncomfortable attitudes among some British subjects in the colonial society of the fin de siècle, who were more keen to blame aspects of poverty than the fleas carried on their own mercantile trading routes. The sense of distrust of the authorities, and disempowerment among communities, is evident in Kandalgaonkar’s discussion of his research.  In this YouTube video he describes ‘a spark that comes from a general unrest, and that unrest could be something that was building up over a period of time’. Over 120 years later, the artwork gives a new form of empowerment to these hidden voices. 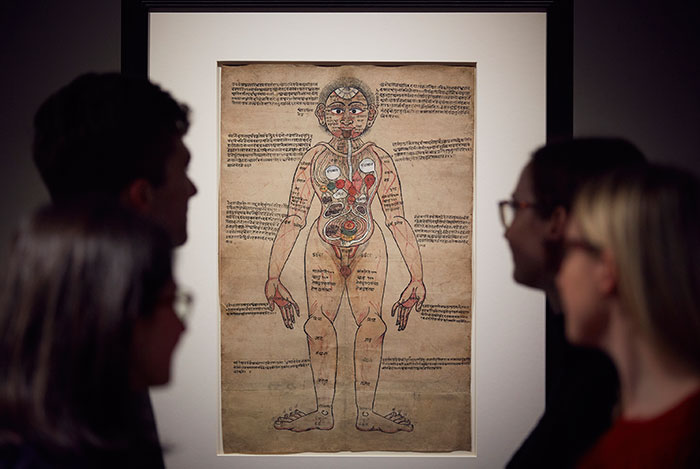 For me, in my own research, the pull of archives is in their potential, the anticipation of the untold stories you might find when you delve into the collection. Assessing the impact of his archival research, Kandalgaonkar highlights how important it has been to ‘explore within the research and within the material that is there. It’s the best way to be informed about a subject.’ As a visual telling of multiple stories, ‘Drawing the Bombay Plague’ demonstrates precisely what is so special about archival research. There is never one simple version of events, and archives allow all the voices to be heard.