The Electric Seashore Tramroad: a forgotten carriage on stilts

This summer saw a slew of articles regarding the build of Brighton’s newest tourist attraction: an enormous observation tower called the i360 that will mark the spot where the West Pier, a disintegrating structure loved by the city’s residents and starling population alike, once stood.

The i360’s striking design has prompted a number of critics to recall Brighton’s bizarre tourist attractions past and present, but few have made reference to what must be one of the strangest: a short-lived tramroad built in 1896 that ran on stilts through the sea, affectionately known as ‘The Daddy Long Legs’. 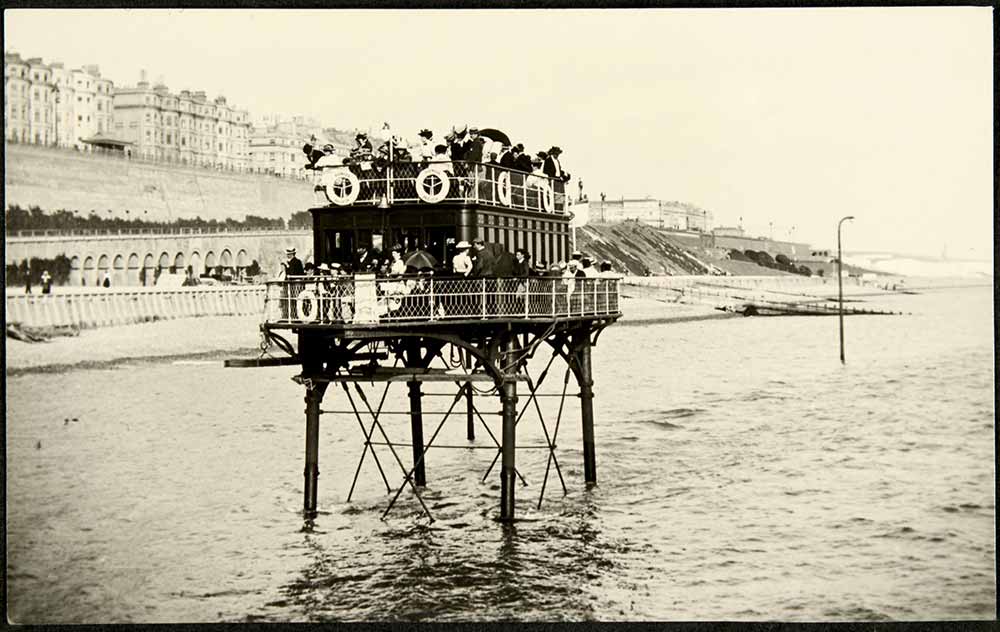 The ‘Brighton and Rottingdean Electric Seashore Tramroad’, the line’s official name, was the brainchild of Magnus Volk, an engineer who, prior to the tramroad, brought the first electric illuminations and public electric railway to Brighton. His Electric Railway opened in 1883, a one and a half mile line that ran along the sea front from Palace Pier to Black Rock, and at high tide ran over the sea. It introduced an unusual mix of electricity, transport and sea water to the British public.

Despite many ‘gloomy predictions as to its impractibility‘ Volk’s line was a success from the get-go. On the August bank holiday after it was opened, the single car is said to have carried roughly 1000 passengers over a duration of 11 hours, a statistic that would prove useful when pushing the next, more outlandish, seafront experiment: a tramroad running through the sea 200ft from the cliffs, for the purpose of affording travellers a fine view of the sea front.

While the railway carriage ran along an elevated track (which technically meant that the train only ran over the sea once the tide was in), the Electric Tramroad carriage was designed to sit on four 23ft steel tubes that travelled along a track on the sea bed, moving through 15ft of sea water at 6 miles per hour, with metal contrivances fitted to the legs to keep the rails clear of seaweed and sand. 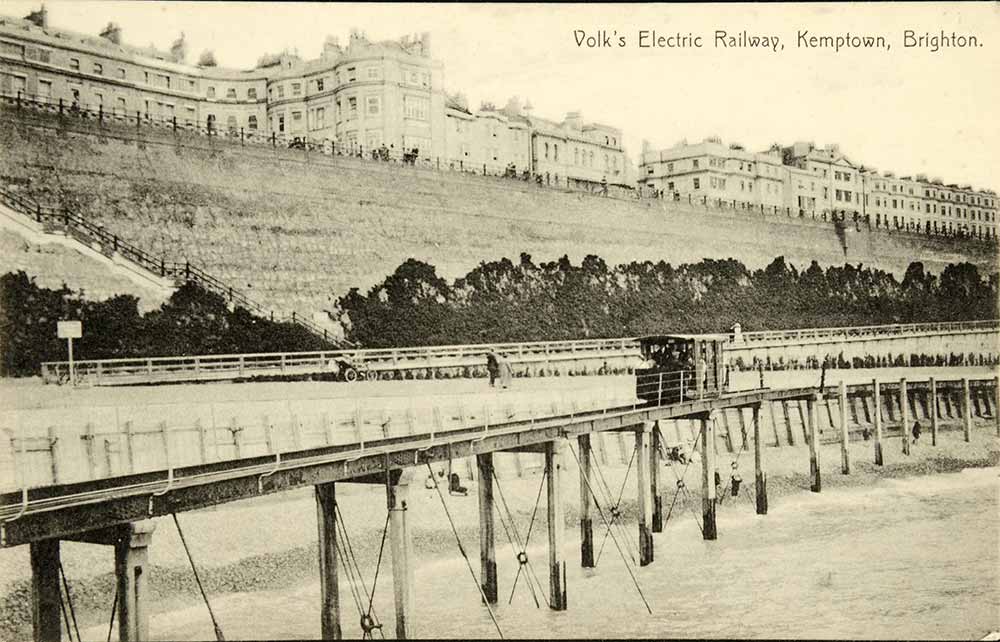 A proposed plan for the tramroad sent to the Board of Trade in 1893 (and now held here at The National Archives) shows a two-tiered carriage, comprised of a saloon surrounded by a railed platform on all sides and topped by a deck. A writer for British Electric Trains mused that ‘the whole vehicle looked rather like a mixture of a pleasure steamer and a seaside pier, mounted on wheels. For the safety of passengers lifebelts and a lifeboat were provided, so adding appropriate colour to the nautical pretensions of the machine’. 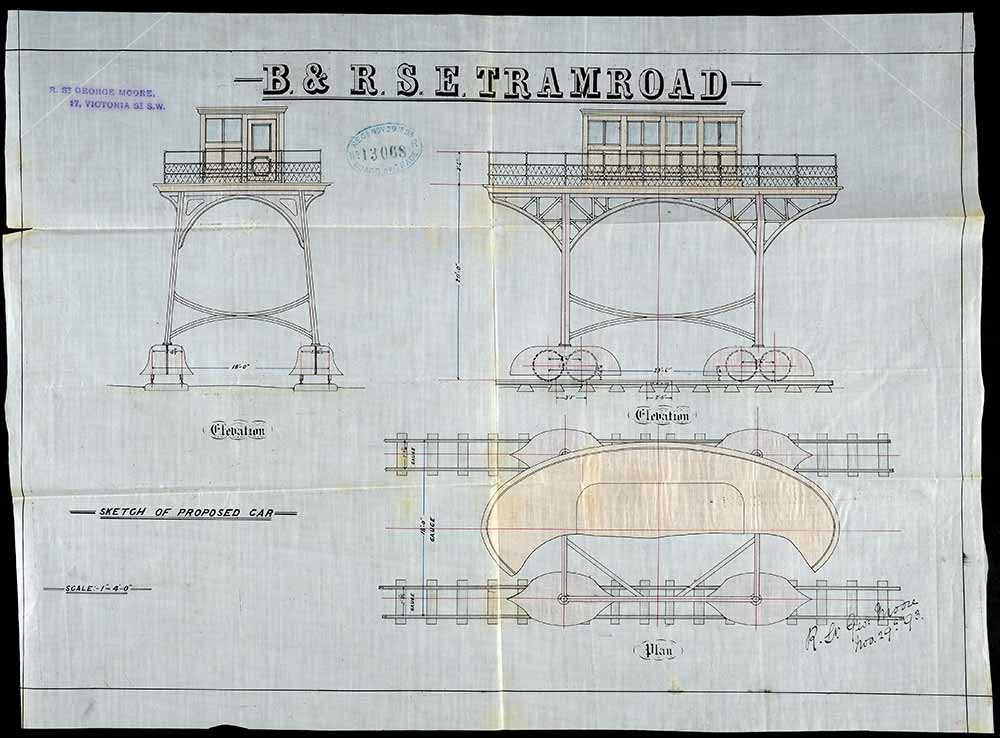 A current was fed to the car via a series of overhead cables. F.A. Marindon, the Board of Trade inspector for the project, wrote that:

‘the equipment is very similar to that of an electric tramroad with overhead wires… The only possible danger to the public other than passengers on the car, lies I think in the chance of the wires or poles breaking and the charged wire in consequence falling within reach of persons in boats or walking along the shore at low water.’

The potential dangers of travelling on the line did not prevent King Edward VII, when Prince of Wales, from making a journey on the tramroad in 1898. A report from our Ministry of Transport records states that he was ‘much pleased with the novelty of the undertaking, and also with the pleasant sensation of travelling through the sea’.

Remarkably, despite the surprising combination of sea water and electricity, it was not an electrical mishap that prematurely ended the life of the Brighton and Rottingdean Seashore Electric Tramroad. A number of events – including Corporation changes to the seafront, and a diminished set of funds for development following reconstruction work necessary after the tramroad was hit by storm damage – eventually led to its abandonment in 1902.

The Volk’s Railway, however, continues to operate today: successfully outliving the West Pier. Whether it will also outrun the i360, we have yet to see.