Thirty years ago, at 2.54 am on 12 October 1984, an IRA-planted bomb ripped through the Grand Hotel on the seafront at Brighton, designed to kill the Prime Minister Margaret Thatcher and her Cabinet. Conservative ministers, MPs, and activists were in Brighton for that year’s party conference and a timed explosive device had been placed under the bath in a room above the one in which Thatcher was staying. The explosion tore a fissure in the front of the hotel several stories high.

Five people were killed in what has been described as ‘the most audacious attack on a British government since the Gunpowder Plot’ and many others were injured. 1 With characteristic defiance the Prime Minister opened proceedings at the conference at 9.30 the next morning. Her speech later in the day referred to the events of the previous night:

‘The bomb attack on the Grand Hotel early this morning was first and foremost an inhuman, undiscriminating attempt to massacre innocent unsuspecting men and women staying in Brighton for our Conservative Conference. Our first thoughts must at once be for those who died and for those who are now in hospital recovering from their injuries. But the bomb attack clearly signified more than this. It was an attempt not only to disrupt and terminate our Conference; It was an attempt to cripple Her Majesty’s democratically-elected Government. That is the scale of the outrage in which we have all shared, and the fact that we are gathered here now—shocked, but composed and determined—is a sign not only that this attack has failed, but that all attempts to destroy democracy by terrorism will fail.’

Despite the defiance, the atrocity came close to seriously affecting government policy. The first five years of Thatcher’s premiership had witnessed far from serene progress regarding Northern Ireland, marked by difficult personal relations between the Prime Minister and the alternate Irish premiers Garrett Fitzgerald and Charles Haughey and, more notably, the hunger strikes at the Maze Prison and the deaths of Bobby Sands and nine other strikers. Since June 1983 the Cabinet Secretary Robert Armstrong and his Irish counterpart Dermot Nally had been instructed to communicate over a possible rapprochement over the future of Northern Ireland. Thatcher has subsequently written that throughout these negotiations she found some mooted solutions (such as a direct role for the Irish police and perhaps the Irish Army in the North) impossible to support. 2 By June 1984 – as shown in the confidential annex of a Cabinet meeting in CAB 128/80/6 – the ‘informal and secret’ discussions were continuing, with the suggested possibility of Ireland reassessing its constitutional claim on the North appealing to ministers. 3 The bombing, however, threatened this fragile progress. The adviser Charles Powell wrote to the Prime Minister, in a note dated 17 October 1984 and available in PREM 19/1288, that Fitzgerald was being ‘wildly over-optimistic’ about the ongoing talks and that a message was needed from the Prime Minister suggesting that ‘we are in a different world following the Brighton bomb and must proceed slowly’. Indeed, Thatcher re-iterated these thoughts herself the next day, writing, ‘“the bomb” has slowed things down and may in the end kill any new initiative because I suspect it will be the first of a series’. 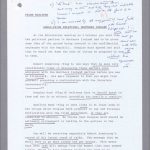 Thatcher’s suspicions carry another significance, though, namely that the Prime Minister, having survived an assassination attempt, was affected in a personal way by the trauma of the previous few days. Indeed, she wrote elsewhere that in the months after the bombing she kept a torch by her bedside when she was staying away from home, in order to replicate the lights that stayed on in the Grand Hotel in the moments after the explosion. 4 Documents from the Prime Minister’s Office at this time are often annotated with Thatcher’s sprawling, handwritten notes, offering what often appears to be a direct view of her mindset. Therefore, it may not be too drastic a leap to suggest that the comment suggesting there may be more attacks is a personal response to being under attack. Furthermore, the recent release of the Prime Minister’s appointment diaries, for the first time, offers us the opportunity to see government business and meetings in the context of family responsibilities and domestic banalities. The starkness of the entry for 0245 on 12 October 1984 – ‘Bomb’ – jars with the meetings and hair appointments which make up much of the diary. 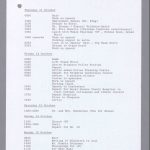 This appointment entry is representative of what Prime Minister’s Office records can provide: understanding of the procedures and policies of a given premiership certainly but, occasionally, the personal can break through in a way that can help build a picture of the experiences of a Prime Minister. The starkness of the entry also represents how a terrorist atrocity punctures the everyday in a way that is unexpected and shocking. And yet, the meetings and hair appointments continued.