I recently booked to see the successful musical the Scottsboro Boys, a theatre adaptation of a real trial that took place in Alabama, America in the 1930s.

When coincidentally leafing through a document for Black History Month I came across material relating to the campaign to clear the nine Scottsboro boys. The nine African American boys, aged between 14 and 22, were wrongly charged with assaulting two white girls. The case was controversial and showed racial tensions at the time in America. But it also created an international case to support the boys.

In the process I opened up an area of the records I was barely aware of, of organisations in Britain campaigning for black civil rights.

In this blog post I am going to look at the activism of the 1920s to 1940s and the politics and social activities that that strengthened black British culture at this time. 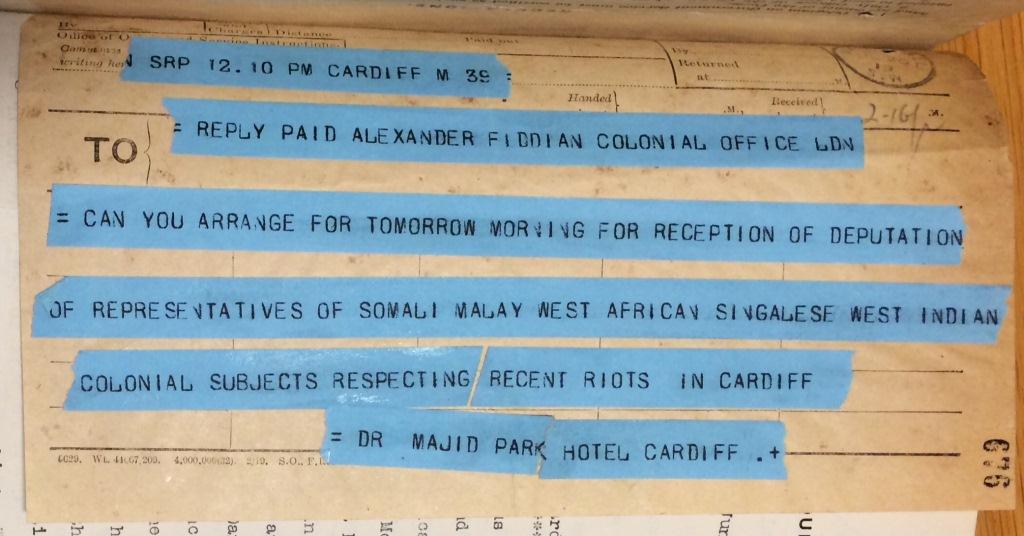 As of 1919 there was growing racial awareness. In the aftermath of the First World War race riots occurred in pockets across the country, as ex-servicemen returned to find unemployment where jobs had been filled by black workers. Unemployment led to areas of unrest, as this telegram sent to the Colonial Office demonstrates was the case in Cardiff (CO 323/819/71). Race riots occurred largely around British sea ports, with memorandums issued by the government to try to protect these black workers and their families.

This was followed by the Special Restriction (Coloured Alien Seamen) Order 1925, which required documentary proof of British status, otherwise denying black seamen work unless they consented to be registered as ‘aliens’ (CO 323/937/12). This caused further agitation.

The records at this time show an increasing racial awareness and as a result an increasingly politicised culture. This manifested itself in campaign groups fighting for racial equality in Britain and the British empire.

I will explore just two of these below. These organisations took on different roles, often with different areas of focus and different campaign methods. One of the most active organisations in this period was the League of Coloured Peoples, a campaigning organisation led and founded by Dr Harold Moody. One of the central issues the League campaigned against was the colour bar. The colour bar was a social system in which black people were denied the same rights as white people, affecting job oppertunities or even whether people would be served in certain premises. The colour bar was never enforced in Britain but racial discrimination was often a de facto reality. At different times this affected multiple areas of public life, with the League protesting the existence of colour bars in British hotels in 1932, with correspondence from all over Africa and the West Indies (CO 323/1199/6)

The agitation peaked again around the limits initially imposed on black men to obtain commissions to serve in the Second World War. The campaign was led through both a deputation and correspondence with the Colonial Office.

The League worked closely with the government to push for progress, however one Home Office file notes that ‘Dr. Moody, and that is the League, have no extreme views – far from it’. Their methods of campaigning were different from other pressure groups having a reputation as a moderate, Christian organisation. 1

Another organisation active at this time but in very different ways was the Negro Welfare Association.

This organisation was formed in London in 1931, and had a hard-line communist and anti-imperialist stance, campaigning largely for social rather than political change. 2 The special branch file we hold on Nancy Cunard reveals a 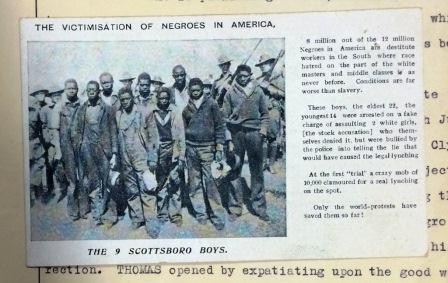 lot about the organisation more broadly. Nancy was a bohemian heiress, who campaigned for racial equality, along with key figures such as Arnold Ward and Peter Blackman. One of the major campaigns they rallied around was the Scottsboro boys case. The file illustrates how the association met across London in specific bars that welcomed them, demonstrating a London network campaigning on racial equality. However the file also demonstrates the social and cultural appeal of these organisations.

Social: the ‘owls’ give a dance 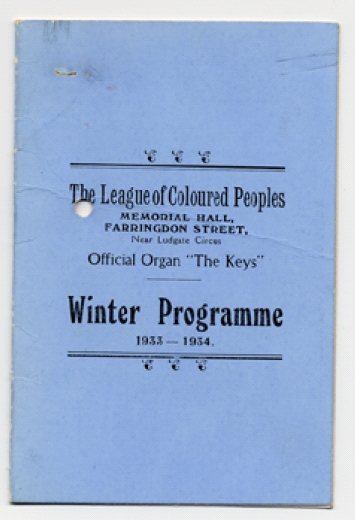 cultural life in Britain. The League of Coloured Peoples’ winter programme for 1933-1934 notes regular general meetings with rotating speakers interspersed with social events, including a Christmas social dance in Soho Square. Meetings mixed the social with the political – when calling a meeting about

‘Jamaicans from well informed Jamaicans and other West Indians recently arrived’ they advertised entertainment from Uriel Porter, a concert hall signer who found fame in films at this time (CO 950/30). Even under the ‘shadow of war’ the League of Coloured Peoples continued holding events, one involving the West Indies Cricket Team (CO 323/1244/13).

The Negro Welfare Association also held social events, with Nancy Cunard holding lavish parties to fundraise for various causes, such as raising funds for the lawyers in the Scottsboro case. Her file is full of press cuttings, one describing a particular party and the music which was clearly enjoyed by all. One press cutting described frican American performer who ‘twirled a bowler hat, strutted, shuffled, kicked, and twitched in rhythmic ecstasy. The ecstasy was infectious’ (MEPO 38/9). 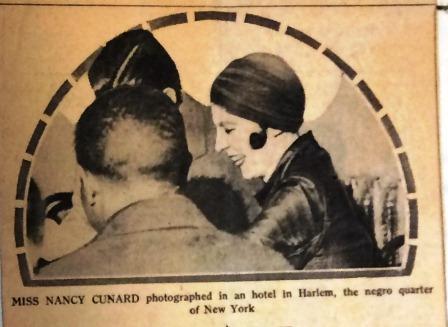 Image of Nancy Cunard from a newspaper cutting [MEPO 38/9]

As a government archive we hold vast amounts of information on all sorts of campaigning organisations. In this post I have only briefly mentioned two but this Black History Month I invite you to explore what we hold and unearth a ‘hidden’ history.

If you’re interested in African or Caribbean history look out for our black history zine event coming soon!