On the afternoon of 21 October, we held an event exploring the theme ‘Beyond Shell shock: Mental Health and the First World War’. Would people engage with such a topic on a Friday afternoon, we wondered?

The format of the event was simple:

Speakers covered a variety of topics, from women and shell shock in the First World War to post-traumatic stress disorder nowadays.

First up was William Spencer, Principal Military Specialist here at The National Archives. He gave insight into the records held in our collection related to mental health and the First World War. PIN 26 and MH 106 are both worthwhile collections to look into, if you have an interest in this area. William also highlighted the importance of having a thesaurus of different terms which can be used when conducting a document search in this area. Searching the catalogue is not always as simple as you would like it to be, and you have to be mindful of terms that might have been used at the time in question.

Denise Poynter was our second speaker of the afternoon. I knew I was asking a lot when giving her only a thirty minute time-slot in which to condense her fascinating PhD. And what an interesting talk it was! The title of Denise’s PhD is: ‘The report on her transfer was shell shock’ : a study of the psychological disorders of nurses and female Voluntary Aid Detachments who served alongside the British and Allied Expeditionary Forces during the First World War, 1914-1918′. Women and shell shock is an area which has only recently begun to be researched – with shell shock considered more often than not a masculine condition. Personally, I found it interesting to hear stories from our records of women who suffered from problems with their mental health as a result of the work they undertook in the war. For example, Alice Dixey, who worked under the constant threat of bombing and noise of air raids happening overhead. The description of her file states that she was suffering from ‘Neurasthenia’. [PIN 26/20052] This is something that is often not considered, and which Denise spoke about – the fact that everyone thinks that the trenches were a more dangerous place to be. Yet, the trenches provided some form of shelter, where as these women behind lines were working in a much more open terrain, and therefore easier targets, in a manner. An absolute highlight of Alice’s talk was an anecdote regarding when she was doing research here at The National Archives and she finally found something she had been looking for and squealed with excitement. I think this is a feeling that many a researcher can relate to!

For the document display aspect of the event, I chose documents that speakers had referenced in their presentations, as well as some other interesting documents which we hold in our collection. For example: 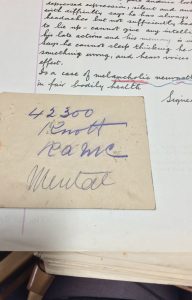 Tag for a patient describing his illness as “mental” (catalogue reference: MH 106/2102) 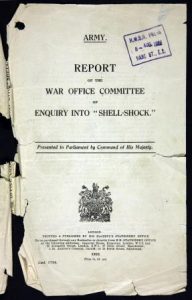 Enquiry Into Causation And Prevention Of Shell Shock Report (catalogue reference: WO 32/4748) 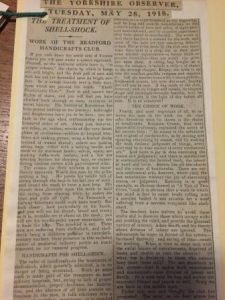 Matthew Green brought a different angle to the proceedings, with an interview style piece relating to post-traumatic stress disorder and the military nowadays. Matthew’s recent book on the subject –  ‘Aftershock: The Untold Story Of Surviving Peace’ – is well worth a read. I had the pleasure of being able to direct the discussion, by asking questions such as: Why did he write the book?  And how did he go about selecting the people to interview? During this exchange, he detailed some of the striking stories which can be found within the pages of his book. Linked to this are conversations relating to new therapies which are being used to help those dealing with post-traumatic stress disorder – including equine therapy. I wouldn’t want to ruin the opportunity for any reader to discover these stories and insights for themselves, so I won’t elaborate further!

Edgar Jones’s presentation was entitled ‘Shell Shock: Psychological Casualties Of The First World War And Their Management’. What was particularly interesting was the focus on Seale Hayne and the work that was undertaken there to apparently cure those men who were suffering from shell shock. And the questioning of Arthur Hurst (physician) and whether the images that were portrayed in his films (‘War Neuroses’ and ‘The Battle of Seale Hayne’) are reliable evidence for what was occurring at this time. In general, it was a pleasure to have the opportunity to listen to someone such as Edgar – who has a vast knowledge of this subject – speak.

The speakers were followed by the chance for the audience to ask questions, and their highly engaging topics meant that conversation and debate easily flowed. Questions and comments ranged from those to do with the terminology surrounding shell shock, to whether we should think of shell shock, neurasthenia and post-traumatic stress disorder as separate things. Conversation also stemmed from thoughts regarding troops other than just those from Britain, who were suffering. This included speaking about the Germans and what techniques they might have had in place for shell shock sufferers, as well as whether or not they had the same debates around the terminology used to describe shell shock (no one knew the answer to this one, so some more research would be required here). Indian soldiers and their experiences during the war were also mentioned, adding to the more diverse and global impact of the First World War.

With a great turn out and an engaged audience, the event was a success – due in no small part to the calibre of speakers and the interesting areas of discussion they brought to the table.