Beyond Commemoration: South Asia and the First World War 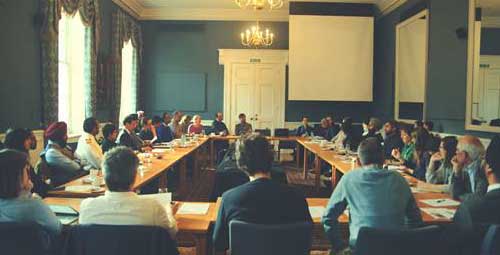 A forum for debate and reflection (image by Jeb Hardwick)

I was part of a team that came together at the end of 2015 to organise an event that would provide a space for reflection and debate on the theme of South Asia and the First World War. The evening included discussion, preceded by short presentations from various projects 1 engaged in commemorating the contribution of troops and personnel from South Asia (including modern day India and Pakistan), who served as part of Britain’s imperial army in the First World War.

The event was held at King’s College London on Wednesday 27 April 2016 to mark the 100th anniversary of the fall of Kut, possibly the biggest disaster in the Indian First World War calendar. It was made possible through a partnership between The National Archives, Kings College London, the Asian Centre (Wood Green) and performing arts company, Nutkhut.

The small team of organisers met on several occasions to help scope out the event and there was considerable behind the scenes activity to ensure that there was wide representation at the event. There was also work to ensure the event was recorded – you can listen to an audio recording of the event or watch video interviews with the organisers below. Dr Santanu Das 2 – who was key to drawing such a wide network together – makes several important points in the video, including the need to go beyond a simple commemoration of ‘imperial heroics’ and ‘brotherhood’ and the importance of looking history squarely in the eye without sanitising its horrors or inequalities.

A wide-ranging discussion took place which raised a number of important questions with application beyond just the story of South Asia and the First World War. How far is it right to use commemoration largely to address contemporary concerns about community cohesion? Are we in a position currently to present contested stories in relation to the involvement of the many millions of non-European, non-white people in the First World War? What are the dangers of overlooking stories or not addressing the more controversial aspects related to the war?

Attendees at the event (image by Jeb Hardwick)

The forum was an opportunity, part of the way through the First World War commemorations, to gauge where we have got to and where we see things developing. It will provide a very useful marker in the future when assessing how activities have progressed.

Throughout the evening it was interesting to note not only the variety of responses to commemoration from talks, workshops and memorialisation but also the importance placed on the role of creative projects in commemoration. How might they provide a way of bridging the gap between archival research and engaging the wider public?

The event was very well attended, including officers from the Heritage Lottery Fund, members of the armed forces, community and arts organisations, and significant individuals who have been active, over many years, in the area of commemorating the role of South Asian soldiers and personnel in the First World War.

Commemorating the role of those who served from India and Pakistan has provided those communities from South Asia who are now settled here with an opportunity to highlight the important contribution they have made to the country. However, the commemoration has also raised many questions about the treatment of the troops and personnel and also the role of Britain as an imperial power in enlisting its colonies to serve, that still require further investigating.

As part of this investigation, The National Archives is now undertaking research around the themes of loyalty and dissent in relation to South Asia and the First World War. Early stage research is already uncovering some fascinating documents at The National Archives, such as a report from Captain Bray on Pan-Islamism (FO 141/773 No 4671) that highlights something that continued to accompany British Imperial rule throughout the First World War: a constant anxiety, real and perceived, of losing control and ultimate collapse.

A key part of the work is something about walking along the fine line between meeting a deep need to be included in a ‘national story’ as a way of proving you have a right to be here and the equally important (if not more important) need to investigate the past with all its complexity and troubling parts. Using records in our collections as a starting point, we will seek to investigate this story and share this more widely.

The ultimate aim of these investigations are twofold: firstly, it’s about fostering safer spaces, where trust can be built and which allows divergent opinions and views to be expressed on the First World War; and secondly, about helping to reframe the war so that it can also be seen through a lens of a rising nationalism and resistance to colonialism that was prevalent at the time.

You can read more about the event on King’s College London’s blog.