The recent post on the Bevin Boys by Simon Demissie set off a couple of trains of thought. The first was one of those vague recollections  of something half remembered in the news a few years back, that the Government had commemorated the work of the hitherto forgotten army of the Bevin Boys. A thought easily expanded upon by putting ‘Bevin Boys’ into the UK Government Web Archive search engine: 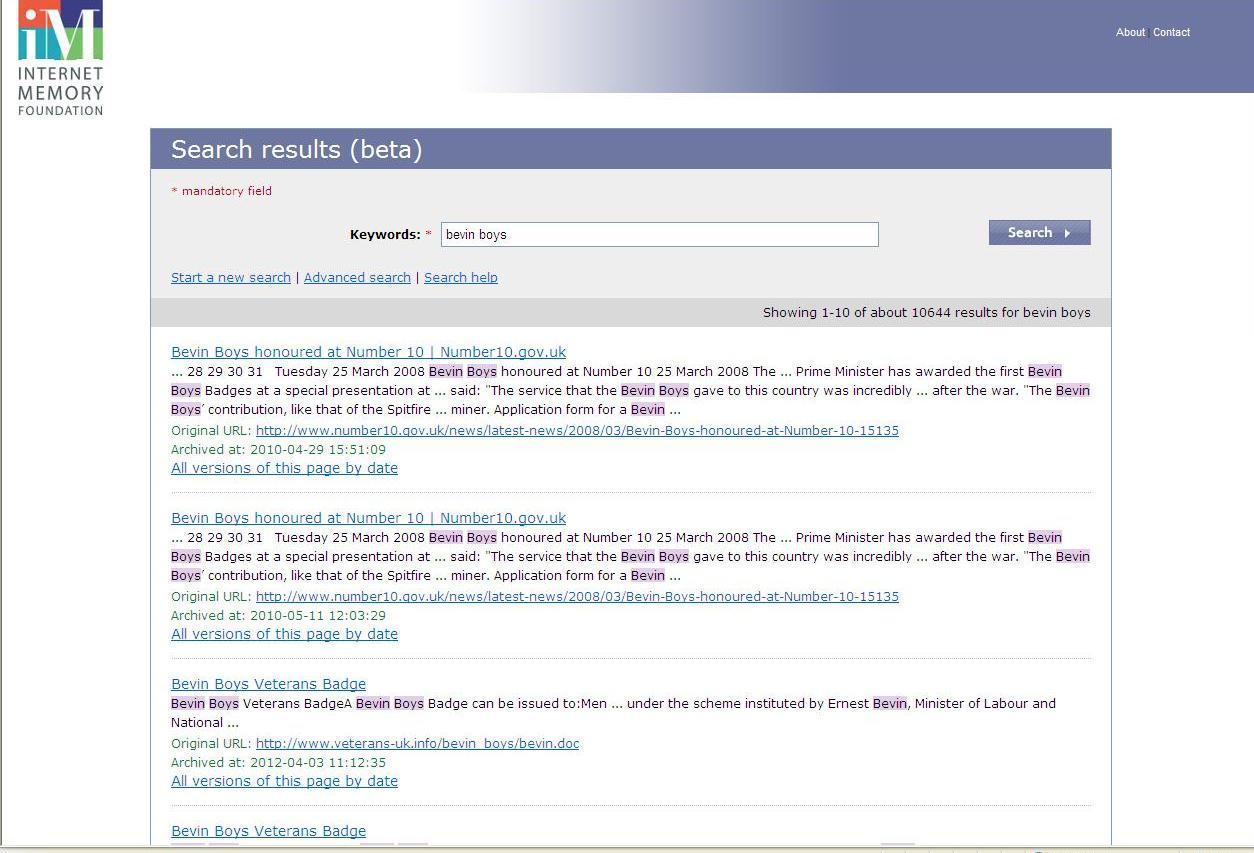 Searching for Bevin Boys in the UK Government Web Archive

and there it all was… 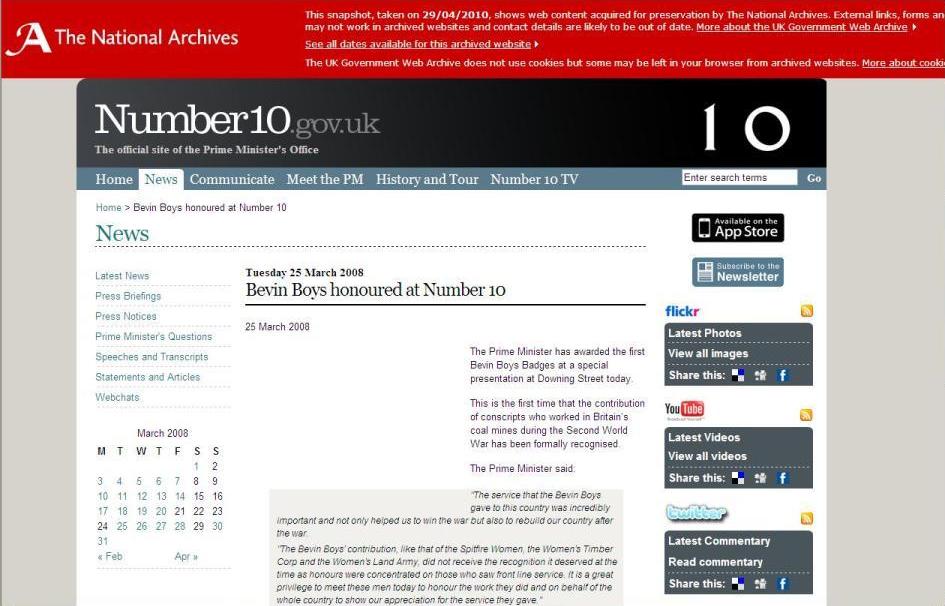 …the campaign for the Bevin Boys Veterans Badge, culminating in the presentation of the Badges by the then Prime Minister, Gordon Brown,  in March 2008 and a recognition that they also gave service to their country.

A Bevin Boy shows his medal, pictured on the Number 10 website

You may recall (without having to resort to UK Government Web Archive) the surprise we at The National Archives felt when we digitised a sample of Home Guard records from WO 409: the men from County Durham turned out to be much younger than Dad’s Army had led us to believe. The demographic of the Durham coalfields was evidently rather different to Walmington on Sea, somewhere on the south coast. In County Durham there were a lot more Private Pikes. Maybe they weren’t bank clerks but Bevin Boys?  Sadly the Bevin Boy register of coal mining ballotees in LAB 45/93 that Simon looked at does not include Durham, but is it not reasonable to suppose that Durham had a large contingent of Bevin Boys, along with the miners of military age  already there? From the dataset of WO 409  entries on our catalogue, Discovery,  we can learn that  hundreds of the Durham Home Guard were born in Durham mining villages (those with ‘colliery’ in the name). Although the records don’t record occupation we can infer that some at least had a mining background. A search of the wider web, and the fine work done by local historians reveals that not only did miners join the Home Guard, some collieries had their own units.

I’ve not been able to track down  any Home Guards’ records in The National Archives relating to wartime collieries, but some of the issues raised by the colliery units can be found in a file from 1953 , COAL 74/1893. A few years after the war, the War Office proposed that the special units of the Home Guard should be re-formed, in readiness for whatever threat the Cold War might pose. The National Coal Board were not in favour of the idea:

‘The mining industry had experience of raising Home Guard Units in the last war and in general terms the experience was unfavourable. Where complete units were formed there was considerable distraction from coal production’

The National Coal Board then develops a scenario worthy of  Dad’s Army itself:

‘the prospect that an over- conscientious or unduly apprehensive local Home Guard Commander might under the power proposed to be granted call on our men to stand by for long periods  at all times of the day or night is deeply disturbing. Another difficulty was that the appointment of officers and NCOs tend to follow the industrial hierarchy which did not necessarily produce the right answer in the military sphere…’

Recollections of people who were there offer a contrasting view from the official record’s ‘considerable distraction from coal production’. On the BBC’s WW2 People’s war website Alan Rowles describes the Home Guard at a Yorkshire colliery:

‘Throughout the country, Home Guard units were deployed at strategically important points, and for this reason Birley East Colliery, with its workforce of around 800 men, was designated as a base. The unit was formed in June 1940 and despite the fact that training and guard duties had to be carried out in the men’s own time, often after an arduous day’s work, there was no shortage of volunteers.’

We like to get a handle on the past by categorising it; somehow the laddish Bevin Boys grinning cheekily through coal dusted faces seem completely different from the Home Guard of bank mangers and butchers immortalised by Dad’s Army. To some extent the web maintains this distinction with separate sites for Bevin Boys and Home Guards but, occasionally, the work of both is drawn together and preserved, as in yet another archived government website, Veterans UK: 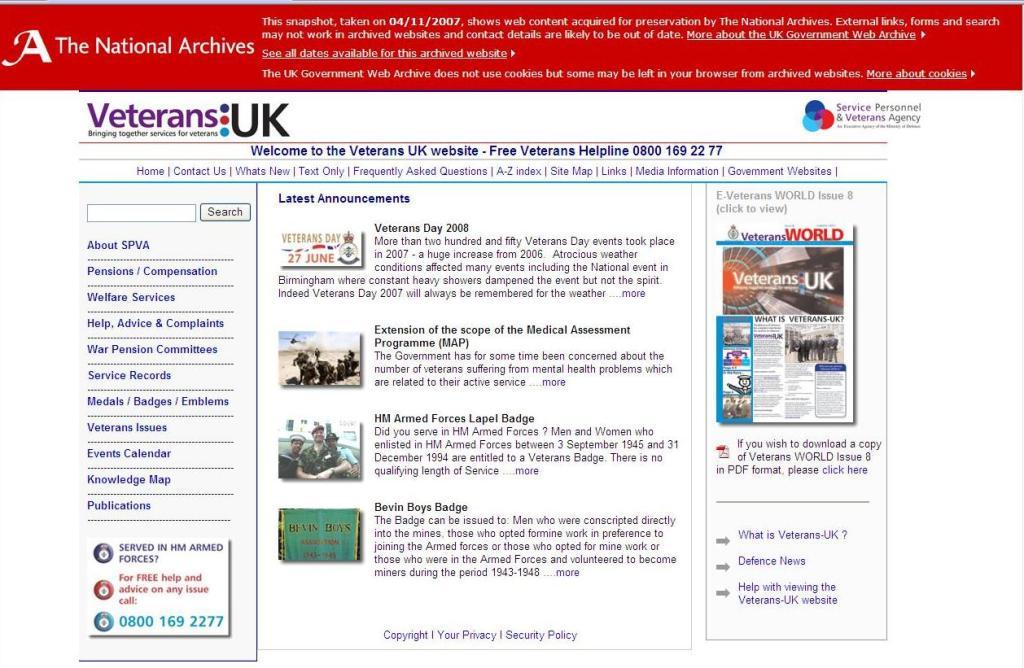