Behind the scenes of organising an exhibition: Modern Brazilian Paintings (1944)

Recently, the Sala Brasil Arts Centre at the Embassy of Brazil hosted the exhibition ‘The Art of Diplomacy: Brazilian Modernism Painted for War‘.

It reunited a selection of paintings from the first collective Brazilian art exhibition in the UK, which took place in 1944 at the Royal Academy, London. It also brought to light the fascinating story of how a group made up of 70 Brazilian artists donated their artworks with the hope that the sales would raise money to directly support the war effort (more precisely, to support the RAF Benevolent Fund). 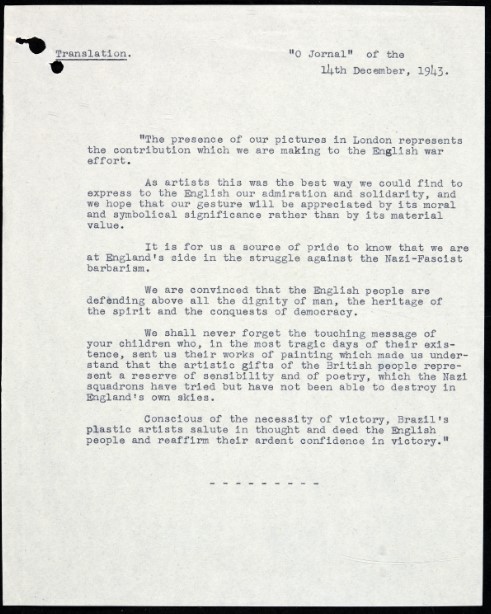 Translation of a speech at a ceremony by Augusto Rodrigues (a painter who acted as spokesman for the group): it summarises the sentiment behind the donation of Brazilian artworks to aid the war effort. Catalogue reference: FO 371/37862

Many experts have reflected on various significant aspects of the 1944 exhibition, providing a commentary on attitudes towards modern Brazilian art at the time, the reception of modern Brazilian painting and the art of diplomacy in the catalogue which accompanies the recent 2018 exhibition.

This blog intends to briefly chronicle the process of organising an exhibition and its intersection with the British domestic cultural and art scenes at the time, which are referenced in the selection of The National Archives’ Foreign Office correspondence files.

The organisation of the 1944 exhibition

The documents in Gift of Brazilian paintings in aid of war effort. Code 6 file 698 (FO 371/37862) were integral to the research and understanding of the organisation of the original 1944 exhibition. 1

The Royal Academy Archive only has one mention of it in their records (referring to the exhibition held in their gallery spaces), so this file really is astonishing in its breadth and coverage. 2 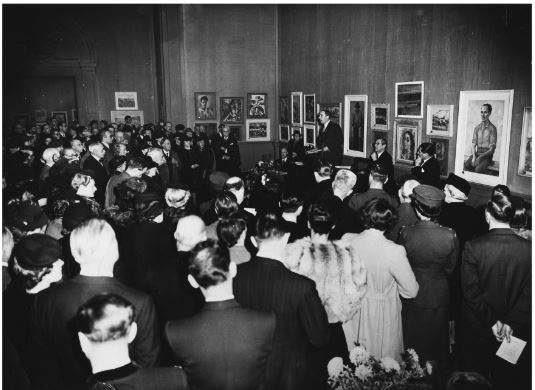 The Foreign Office initially contacted the Exhibition Division within the Ministry of Information who said they would be unable to handle this particular display as they were already engaged with other government work. 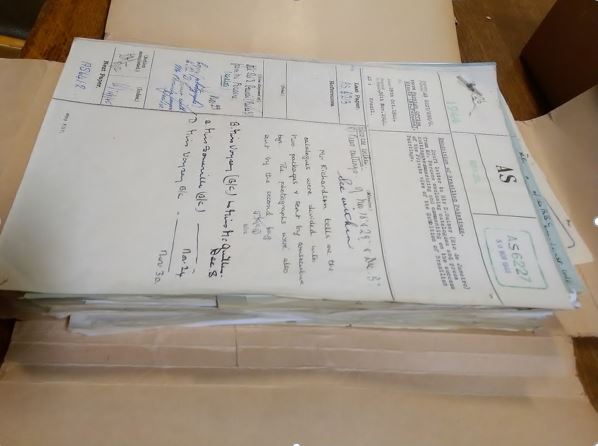 Correspondence relating to the organisation of the modern Brazilian painting exhibition in 1944. Catalogue reference: FO 371/37862

Once the British Council were on board, finding a London location for the exhibition proved exceptionally labour-intensive: much of the correspondence is devoted to this aspect alone.

Many galleries were thought to be too war-damaged to host exhibitions.

Letters and minutes that were dated September 1944 explained that the Tate Gallery was too bomb-damaged to hold the exhibition.

The National Gallery, Wallace Collection and The National Portrait Gallery were ‘to reopen their collections shortly and [were] not in the position to accept extraneous exhibitions. The Royal Exchange was a possibility but too badly damaged to be suitable.’ 3

However, in the minutes of February 1944 we get a rare glimpse into Foreign Office intervention in decisions about exhibitions within public institutions, and behind-the-scenes opinions that only Foreign Officials were privy to.

Kenneth Clark (director of The National Gallery from 1934 to 1945) said that it would ‘hardly be possible for the National Gallery to hold the exhibition in the basement seeing, on Foreign Office advice, they have refused to hold exhibitions of Russian and American pictures.’

He suggested The Royal Academy or Wallace Collection as alternative venues, and ‘if neither was possible, perhaps a private gallery, such as one on Suffolk Street’. 4

The Foreign Office eventually negotiated with the Royal Academy (who initially rejected the suggestion of hosting the exhibition) and who finally agreed to hold the exhibition on the proviso that they were compensated with rent – in fact, 40 days prior to its launch. 5 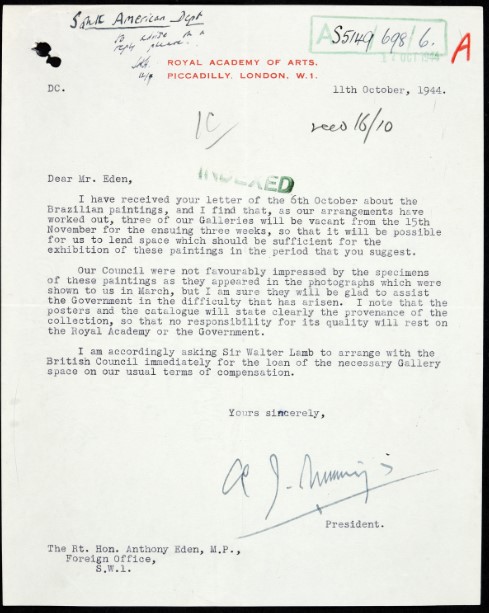 The private view took place on 22 November 1944, with a run of three weeks; the exhibition extensively toured in Britain including Norwich, Manchester and Edinburgh until August the following year.

Opening of the 1944 exhibition

A vivid account of the private view on 22 November 1944 is contained in the file. As Victor Perowne (Director of the South American Department at the Foreign Office) recounted in a copy of an out-correspondence dated 29 November 1944, the private view ‘went off very well […] forty-seven pictures have already sold’. There is also a postscript that ‘the Queen visited the exhibition today’. 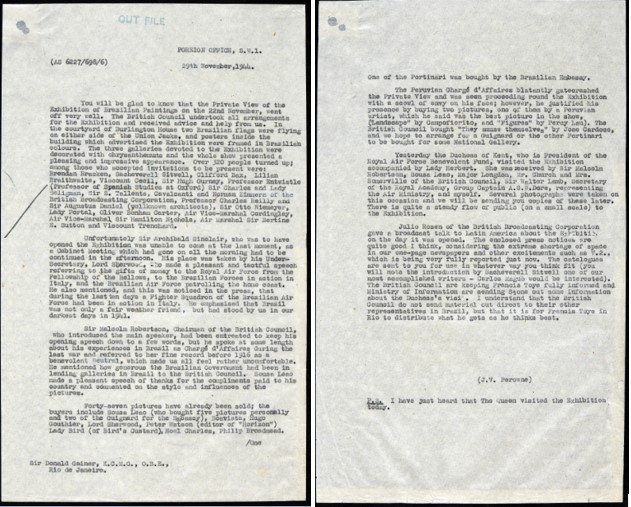 Copy of an out-letter correspondence which summarises the private view. Catalogue reference: FO 371/37862.

There are no complete records on who attended the private view. A total of 800 guests were invited and around 320 people turned up. 6 However, it is unlikely, for example, that the sculptor Alfred Drury attended (he died a month later that year).

Similarly, the artist George Clausen died on the day of the private view and there is no suggestion that he ever attended. 7

One person of interest is Julian Trevelyan, an artist, aged 34 at the time, who later became Head of Etching Department at the Royal College of Art (1955–63).

Trevelyan was considered by some as one of the instigators behind the revolution in etching in the 1960s art schools, which proved influential to a number of students including R.B. Kitaj, David Hockney and, the printmaker, Norman Ackroyd (the latter two still practising artists today). 8

We know Trevelyan attended the exhibition because he brought the painting ‘Cyclists’ by Maria Helena Vieira Da Silva for £3.3s, and this is in the lists of purchases.

In the translated biography of the artist Maria Helena Vieira Da Silva submitted by the artists to the Foreign Office in January 1944, it was explained that Julian Trevelyan was already familiar with Maria Da Silva’s work, and that others such as Peggy Guggenheim had purchased her work. 9

He was obviously a fan of modern Brazilian art, while the initial reception in Britain was debated and considered mixed. 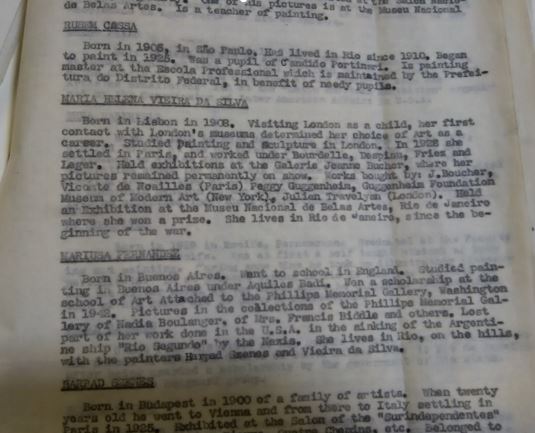 A translated biography of Maria Helena Vieira Da Silva, one of the original artists who donated work for the 1944 exhibition. Catalogue reference: FO 371/371/37862

In a letter dated February 1945 it was stated that, contrary to belief, the newspapers were not hostile towards the exhibition. Lillian Somerville said of the mixed reviews in Norwich, ‘We have found that any modern pictures in the provinces usually incur such criticism, most visitors having preconceived ideas of art being purely representation in the Modern Royal Academy idiom.’ 10

It is noted that, according to the Foreign Office minutes, the ‘press notices are quite good, considering the extreme shortage of space in our one-page newspapers and other excitements, such as V2 which is getting a lot of coverage’.

Lilian Somerville reported that the attendance at the exhibition during the three weeks was around 2,600, around 1000 catalogues were sold, and the sales of the pictures amounted to over £900. 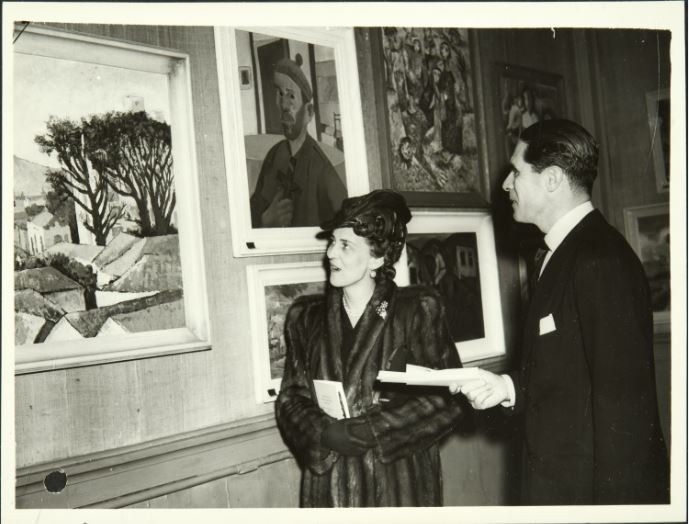 Duchess of Kent and Sousa Leao, Charge d’Affaires of The Brazilian Embassy, at the exhibition, looking at the painting ‘Landscape’ by Quirino da Silva. Document reference: FO 371/37862

This was an amazing feat, especially when considering that organising an exhibition at such short notice turned out to be less than straightforward. The final funds raised went towards the RAF Benevolent Fund and the Brazilian artists were sent illuminated letters of thanks. 11

Watch the video which provides the background to the original 1944 exhibition and which accompanied the 2018 exhibition.

Watch the Facebook Live tour of the exhibition given by Dr Adrian Locke, Senior Curator of the Royal Academy of Arts.

Look at The Art of Diplomacy website for more background information.