On 15 June 1845, three men-of-war (two French and one British) attacked the fort and town of Tamatave in Madagascar. The attack has been described as Britain’s shortest war, but in reality was an unsuccessful punitive action taken to show displeasure at the Hova authority’s laws and treatment of European subjects. 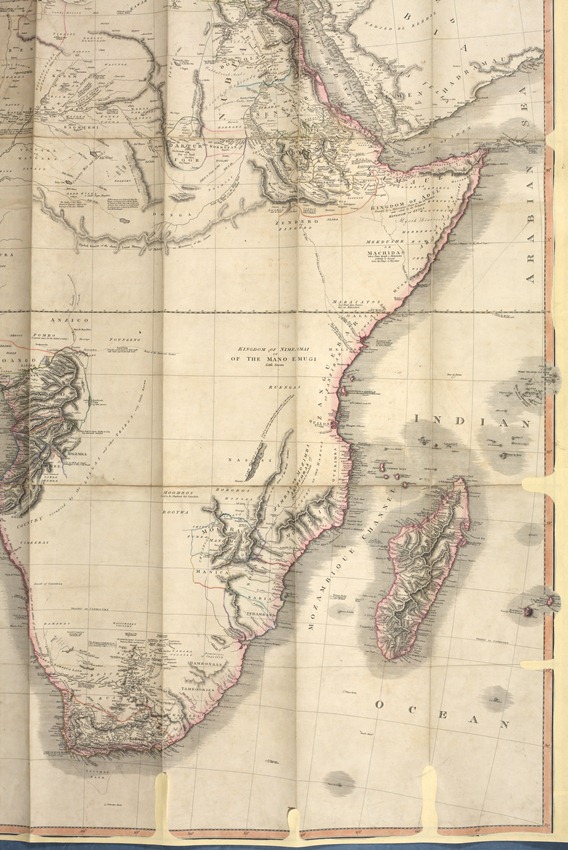 The British government’s attention was first drawn to Madagascar in 1817, when it was in competition with France to gain influence with the authorities. Radama, king of the Hovas (one of the main tribes on the island), claimed sovereignty over the whole island and concluded a treaty with the British, in which he undertook to supress the slave trade in exchange for an annual payment. With the signing of the treaty, friendly relations developed between the two countries and many British subjects visited the island.

In 1828 King Radama died and was succeeded by Queen Ranavalo Manjaka. The relationship subsequently deteriorated, as the Queen did not entertain the same friendly feelings towards the English as the King had. The following year the French undertook an expedition to the islands and in October occupied Tamatave, concluding a treaty with Madagascar in November of the same year. Correspondence shows that there was probably no single tribe in Madagascar that would have far preferred the British to the French alliance, and suggests that the French treaty was no sign of French influence (FO 48/31). 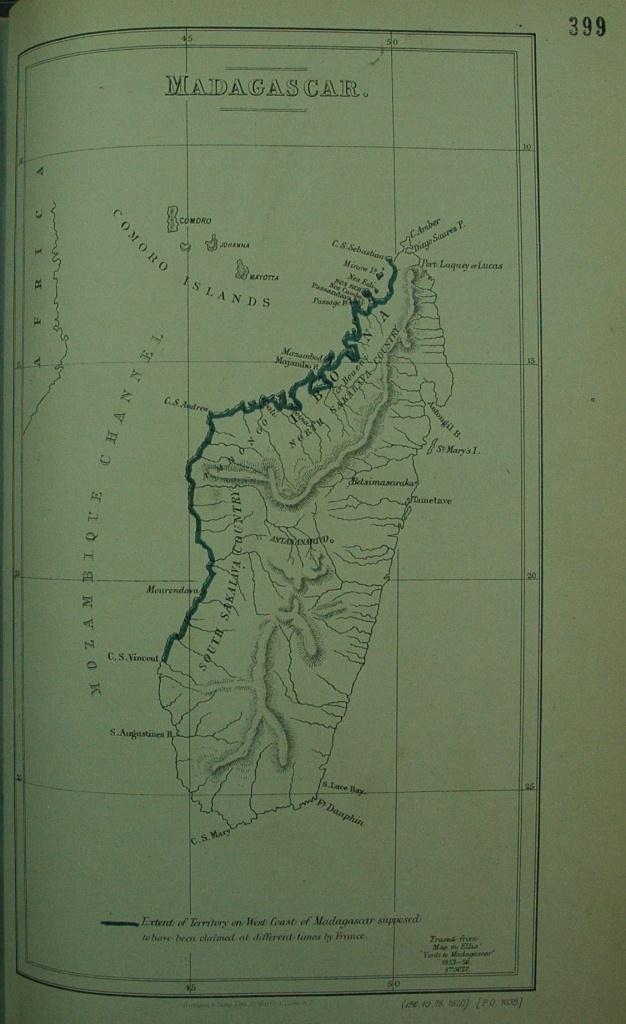 Madagascar was seen as strategically important to British interests, and French control of the island was a concern for the governor of the British Colony of Mauritius, which is shown in a dispatch to the Colonial office in May 1841. 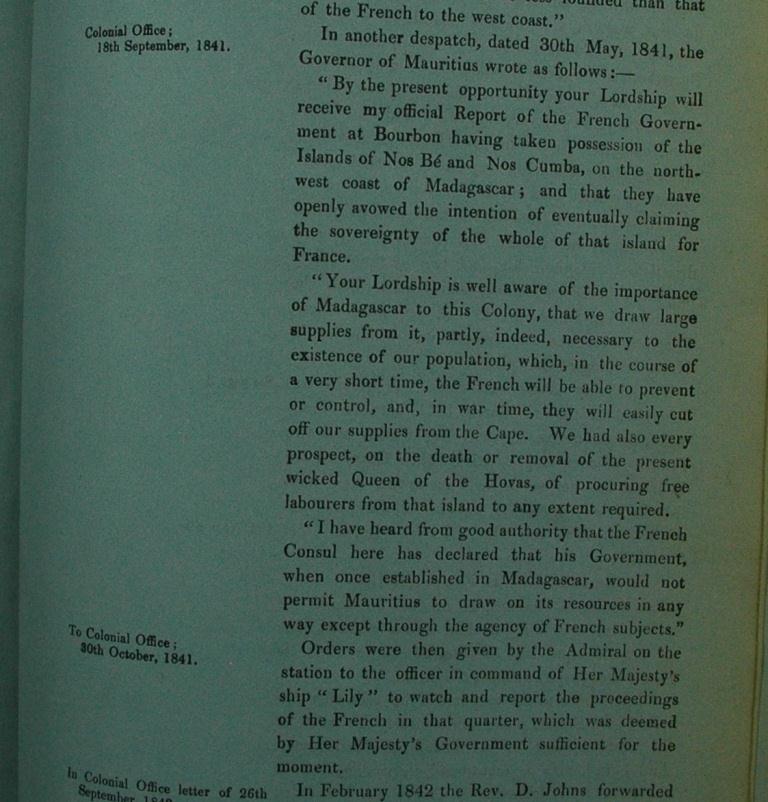 The Hovas were not keen on any foreign influence. On 13 May 1845 a new law was passed that meant that all foreigners on the island would have to join in the execution of all public works, even such as were performed by slaves, and at the simple order of even the lowest of the Hova authorities. 1 This included ordeal by tanguena, the imposition of forced labour at the Queen’s whim, and the penalty of life-long slavery for many transgressions. 2  The traders believed that these measure would ‘inflict very serious injury in a variety of ways upon them if they consented to abide by it’. They accordingly refused to obey it, and were therefore ordered to leave the island within in 11 days (FO 48/31).

Captain Kelly of HMS Conway was sent to Madagascar to investigate the grievances of British subjects residing there, following the receipt of a letter from ten residents to the governor of Mauritius in May 1845 (FO 48/31). The Queen’s policy towards the traders had worsened and it was clear that intervention was required. 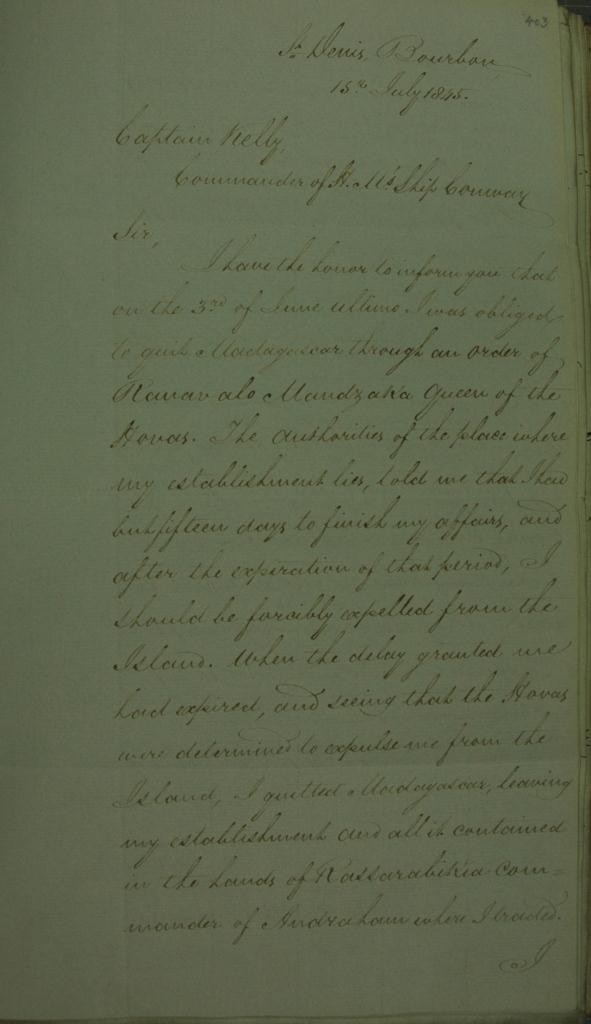 Letter from trader describing the effects of the new policy (catalogue reference: WO 1/514 )

As part of the investigation, Captain Kelly enquired about the effect of the new law on the ownership of land purchased by traders in the time of King Radama.

‘The purpose of my visit to Tamatave was to protect the British Merchants against the barbarous conduct of the Hova Government.’ 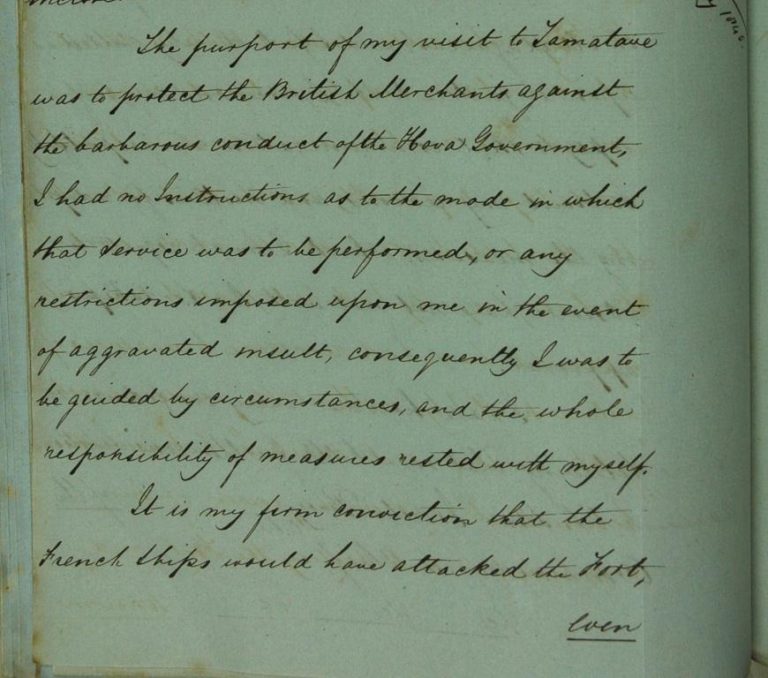 The correspondence files show that on 12 June 1845, Kelly again wrote to request assistance with his enquiries. This led to a meeting between Kelly and the Tamatave authorities to discuss the Queen’s insistence that the traders should leave (ADM 1/5552). 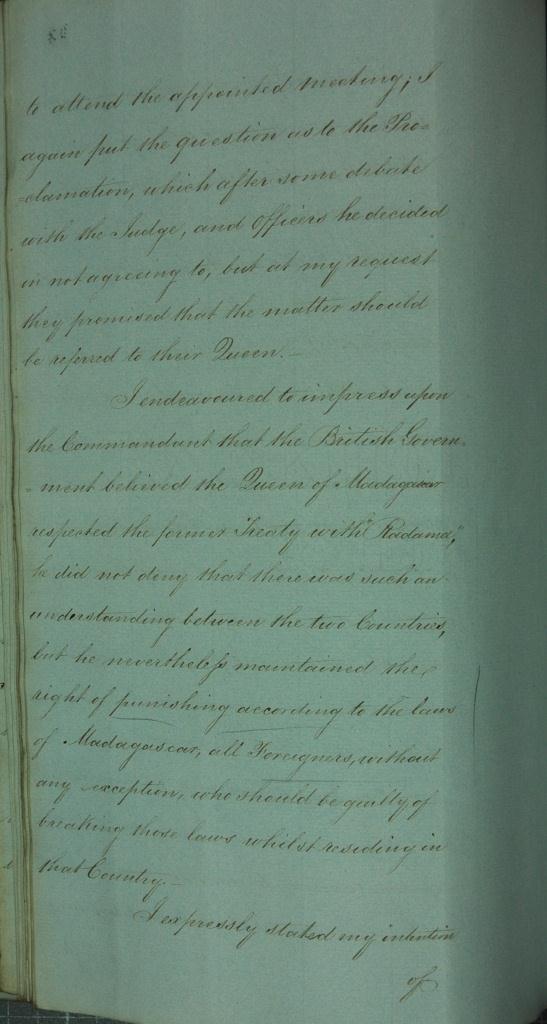 In the event, the Madagascan rulers refused Kelly’s request that traders be given one year to dispose of their property and that the law should be rescinded (ADM 1/5552). 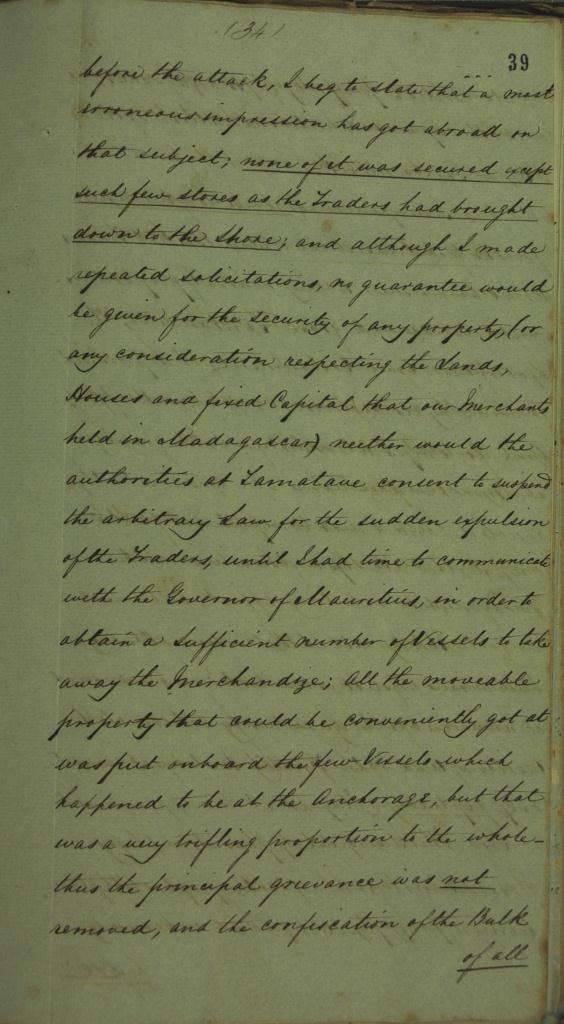 No movement on issues relating to assests (catalogue reference: ADM 123/20)

Kelly met with the captains of the two French ships to discuss what action should be taken. It was clear that the French wanted to attack and Captain Kelly decided that his ship and crew should be involved. They drew up a plan of attack, which was focused on reducing the fort, with the Conway on the right of the Berceau and Zelee. 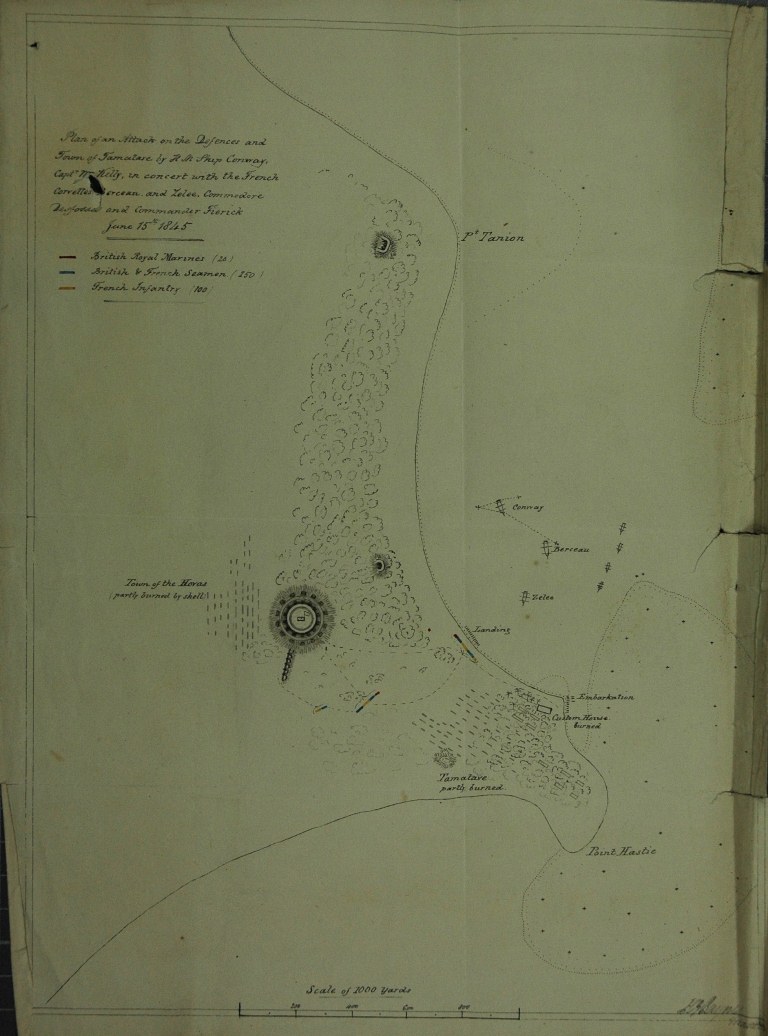 Plan of attack on the defences and town of Tamatave (catalogue reference: ADM 1/5552)

The Conway’s ship log gives details of the bombardment and the invasion by marines, crew and French forces. It also records the number of casualties for the combined force as 21 killed, 53 wounded.

The action was completed in four hours. The invaders had underestimated the strength of the Tamatave’s fort and retreated without capturing it. Later correspondence showed that a lack of intelligence and knowledge about the fort lead to the failure of the action: its construction meant that a larger force would have been required for its capture.

‘The escarp is 9 feet thick, and has a foundation 2 feet deep. The interior wall is 3 feet thick’ 3 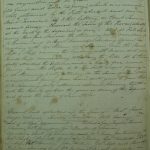 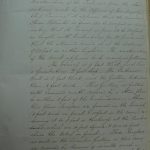 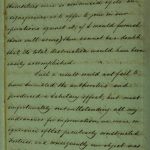 ‘we were in ignorance of that peculiarly constructed fortress, and consequently our object was only partially obtained’

The incident damaged the relationship between Britain and the Hova for many years. In the 1860s, the French and British concluded a treaty with Madagascar. During the 1880s, a further agreement enabled the French to extend their influence over Madagascan affairs, and in 1890 the British recognized a French protectorate over Madagascar in exchange for concessions in Zanzibar.

To finish: a rough sketch of the town and fort at Tamatave by Lieutenant Heseltine, detailing the position of the landing force. 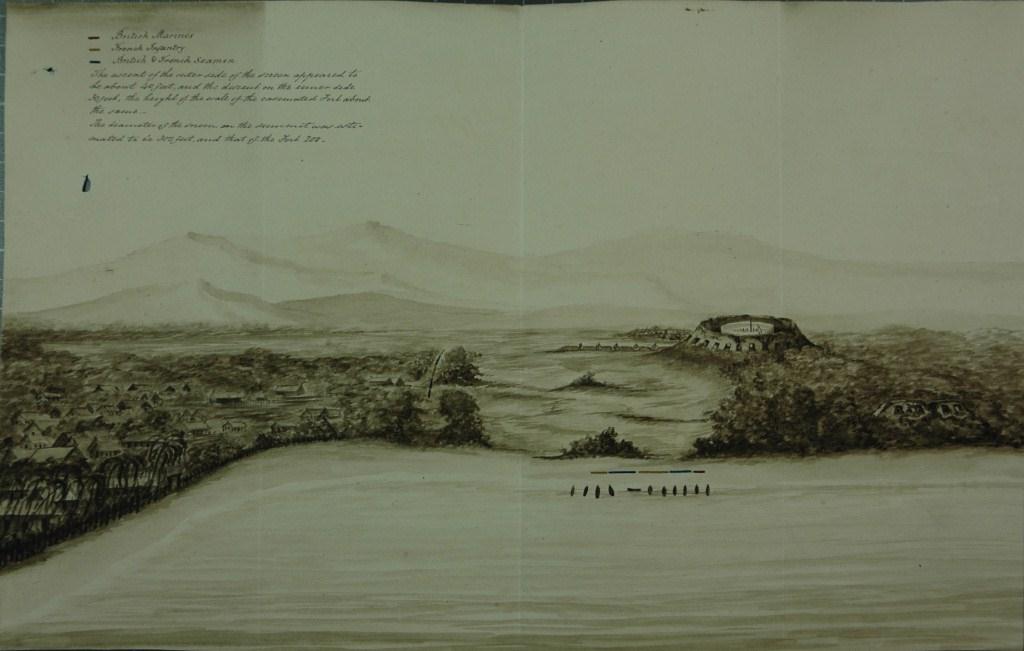